On January 26, the Sydney Morning Herald headline read ’Hopes for Myer turnaround after David Jones posts sales recovery’. The article stated the fund managers and analysts are tipping our department stores’ fortunes to rebound after David Jones reported a huge recovery in sales during December.

Furthermore, the Australian Bureau of Statistics (ABS) said in its 22nd January media release that retail trade increased by 9.4% from December 2019 to December 2020. While supermarkets sales showed a small decline in December, (likely driven by the limited numbers of Christmas gatherings), it seems optimistic for 2021 and beyond.

It’s that time of the year when we start to predict what the future holds. Reinvention appears to be entirely on the agenda. In Coles and Woolworths’ case to grow, sometimes you need to shrink or adapt to the locality. Smaller local-based format stores have been their driver. Coles announced in 2019 the rollout of 14D smaller format stores and Woolworths Metro’s are carrying out a rapid expansion program. These smaller formats allow for faster market penetration, with the added advantage of lower rents, fewer parking requirements, and staff numbers while also providing cost savings. Coles is also now rolling out three store formats dependant on locality. Depending on where you live, your local store will end up being reconfigured to a format A, B or C supermarket.

East Gardens in Sydney and Tooronga in Melbourne are format A’s - described as a premium, foodie and convenience offer with an expanded range.

The format A is targeted at a “mid to high affluence” shopper and for stores with a high number of customers. For instance, the East Gardens store has a DIY pizza station where you can choose fresh dough, tubs of mozzarella, bocconcini or Fior di latte cheese and sauces base, all to make your own masterpiece at home. Half the stores will be the standard Coles offers, or format B while the remaining 25% will be the format C or “low cost, self-service operating model”.

It’s reported that if you’re in a format C category you can kiss goodbye to the Deli and more than likely have less staff on hand to keep costs down. A risky strategy and only time will tell if it works.

The format C stores in Ardeer and Clayton in Melbourne have had their Deli’s ripped out and replaced by walls of pre-packed meats, there’s no bakery, and items like toilet paper are sold from a palette on the floor.

Woolworths too is looking for beyond one size fits all approach with it’s continuing refurbishment program. It’s Marrickville Metro store has been nominated as the “blueprint” for the rest of its network upgrade.

At Park Sydney’s Erskineville, a new Metro store highlights its new approach to locality, with an expresso coffee station just inside the front door and an artisan bakery to boot. More than 200 products sold in the store have been sourced from local producers. Sourced produce will include handmade doughnuts and pastries direct from Bob & Pete’s 100% Yum bakery in nearby Marrickville. There’s also a “hot meals to go” section, pizzas baked on-site and an aromatic curry bar. “We have focused on creating a food store that is locally relevant to the Erskineville community”, a Woolworths spokesperson said.

IGA has taken Aldi head-on in the value proposition stakes with it’s new “Supa Valu” concept warehouse straight from the Aldi playbook. The first rollout of the new concept is at Doonside in Sydney’s West. In conjunction with the Romeo family (a long term IGA owner) they have pitched to the customer with the wide aisles, palettes stacked to the ceiling and the bargain bin matching Aldi’s pricing they suggest in their marketing promotion.

They further claim they are putting the right store in the right location. “We are a local brand, where this solution fits the local catchment”. The key point from all the supermarkets is aligning their store in layout and range to the local community’s needs rather than one size fits all strategy.

This is all fairly timely as Covid has forced us all to stay very local. It has forced working from home people to rediscover their local stores and neighbourhood shopping precincts. It’s created a rebirth and established stronger community connections. Some of this may be permanent given the extended duration of behavioural change. Customers are now seeking out retail experiences that are safe or fast, creating an opportunity for retailers and landlords to become a safe and trusted destination.

With this change in consumer behaviour services like click and collect has increased and so has technology use with many ordering online then picking up the packaged shopping from a designated safe point.

Beyond Covid, this form of shopping is likely to stay, if only for our food shopping. This creates an opportunity for landlords to develop customer-friendly designated secure pick-up areas outside in their centre’s carparks. So, it appears for now at least local relevance is and will be the key focus.

Tony has over 35 years experience within the retail and mixed-use sectors, extending across master planning and design. Prior to joining Hames Sharley, Tony has directed award-winning projects such as the Orion Springfield Queensland (mixed-use) and Sovereign Hills Town Centre (mixed-use). Tony also worked on projects such as No. 1 Martin Place (Sydney GPO), Grace Bros Broadway and Sydney Central Plaza redevelopments.

A changeroom of their own: the importance of designing for women in sport 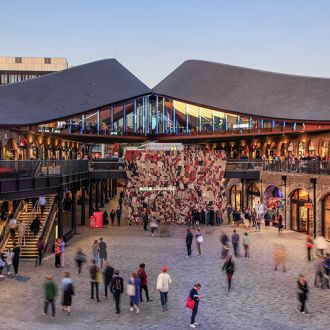