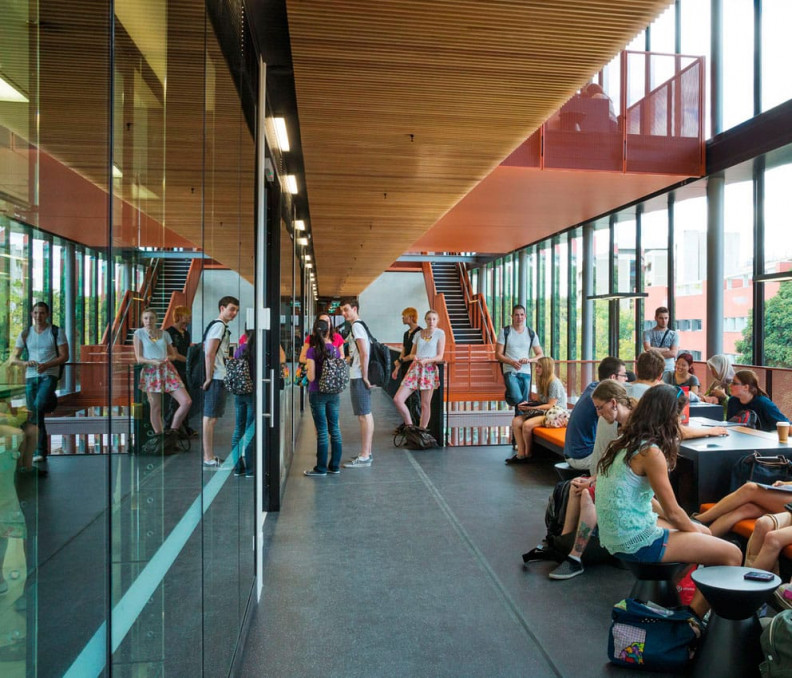 The University of Adelaide’s new science and research building, The Braggs, has become the State’s most celebrated building for 2013 after winning the top prize at the South Australian Architecture Awards.

The Braggs won the highest honour, the Jack McConnell Award for Public Architecture, at an awards ceremony hosted by the Australian Institute of Architects on Friday night.

Architects BVN Donovan Hill and Hames Sharley received the award for their work on The Braggs, which houses the University’s world-leading Institute for Photonics and Advanced Sensing (IPAS) and other science teaching and research facilities.

The Australian Institute of Architects said the building “symbolically represents its internal function through an external crystalline form that shimmers through its reflection and refraction of light throughout the day”.

The awards jury said: “The Braggs Building was a clear winner of this award. We were impressed with its clear conceptual basis drawn from the research program it houses. It is strongly expressive of and responsive to the medium of photonics through its use of glass and light.

“The strong logic underlying planning and form is demonstrative of a thoroughly considered project that effectively communicates the nature of science, technology and light.”

The Braggs contains more than 10,000 square metres of research and teaching facilities, including specialised laboratories for research into photonics and advanced sensing, a large lecture theatre, and state-of-the-art teaching laboratories.

Paul Duldig, Vice-President (Services and Resources) at the University of Adelaide, says: “One of our greatest challenges in capital infrastructure development at the University of Adelaide has been blending the new with the old. The Braggs epitomises the way in which a modern science and research centre can be designed to harmonise with existing buildings but without compromising on any functionality.

“We were able to work very closely with the architects, and the research and teaching groups who would use the space, to ensure every last detail was considered,” he says.

“With a land-locked campus, the smallest area of any Group of Eight university, we have to make the most of every square centimetre. The Braggs sits perfectly beside our 6 star Green Star building, Ingkarni Wardli, and helps to create a boulevard with unrestricted views from the Barr Smith Library Reading Room through to the Botanic Gardens.”

The building was designed by BVN Architecture and Hames Sharley and constructed by Baulderstone.