Science fiction tends to paint a grim picture of the future – it won’t be long now before the robots are here, taking control and turning humanity into a slave race geared only to serving their electronic overlords.

The truth is, however, that the robots are here already – sci-fi, however, has simply inverted the roles. We, as people, are becoming increasingly reliant on robotics and automation to service our needs. It’s rare to see anything these days that doesn’t involve automation in its production process: mobile phones, cars, aeroplanes, houses, even the clothes you’re wearing.

Hold on a moment. Houses…

When it comes to industries that have taken advantage of automation, the building industry is, in fact, the odd one out, lagging way behind other production processes. To begin to get a grasp on why that should be, it’s worth thinking about how buildings differ from everything else on the list you just read.

For a start, a house isn’t typically seen as a product, nor is it traditionally a part of a significant global supply-chain process. Houses are also far from standardised – on the contrary, they’re usually highly customised. What’s more, a house is the only thing on that list that has been constructed, essentially, the same way since Roman times. In a nutshell, the way we traditionally build houses hasn’t evolved much.

You may well ask why that’s a problem – after all if it ain’t broke, why fix it? But over time, the building process has thrown up a host of problems that need to be addressed: issues of ecology, cost and occupational health and safety, not to mention the fact that as an industry it’s decidedly dependent on favourable weather conditions.

There are three key areas, however, in which the adoption of automation into the process can make a huge difference: the recent drop in productivity levels, the reliance of the industry on traditional, labour-intensive trades, and the simple fact that the industry’s practices fail to reflect the innovation and technology of the times we live in.

The first of these makes for alarming reading if you have a vested interest in construction. According to statistics from sources as diverse as the World Bank, the US Bureau of Economic Affairs and analysis by the McKinsey Global Institute, between 1995 and 2014, approximately a third has been wiped off the value added to a building project per hour of work performed on it.

It’s entirely possible that this is directly related to the second item on that list, the reliance on traditional trades. Globally, construction is suffering from a shortage in skilled workers on almost every level. Bricklayers, stonemasons, carpenters, glaziers, plumbers and more, there just aren’t enough of the people on whom building relies available to do the job. Meanwhile, the workforce that is in place is getting older and the pool from which to recruit new skilled workers is becoming ever more shallow, with younger generations leaning away from traditional trades and more towards employment in the ever-growing digital and technology arenas.

There’s a certain irony to this, in that while technology is blossoming and becoming more attractive as a potential career path, construction has its metaphorical head in the sand when it comes to making use of it.

Compared to other industries around the world, construction is falling behind in its adoption of digitised methods. According to figures from the McKinsey Global Institute in 2015, the building industry spends less than one percent of its average revenue on research and development. The car industry, by comparison, spends three and a half percent, and aerospace four and a half. Construction is also one of the least digitalised sectors, which is a sobering thought when you consider the impact of the industry in Australia’s GDP.

Given that productivity needs to increase and that it would be beneficial to rely less on the traditional labour market, it makes sense for construction to make better use of advanced technologies in addressing both problems. Indeed, a different study by McKinsey and Co has estimated that employment of automated technology could add $1.6 trillion of value to the global industry, meeting half the world’s infrastructure needs. Estimates also suggest five to ten times the productivity could be achieved in some parts of the industry. In any other sector, figures like that would generate an immediate and focused response: you can bet that faced with a trillion-dollar market opportunity, a company like Google would instantly dedicate a secret lab in California to take full advantage of it.

Of course, one of the key concerns is what will happen to the people who are in traditional trades if we start replacing their jobs with robots – surely that is heading towards the kind of dystopian vision of science fiction in which humanity is made redundant?

With that in mind, it is important to consider how automation and technology will be used in the industry – the misconception is that they will supplant entire jobs, whereas in truth they will likely take over specific activities. This, in turn, is likely to create a new range of jobs based on adjusted skill sets.

While bricklaying robots, for example, may be able to build more quickly and more precisely than humans, they will still require control, maintenance and guidance? Put simply, the construction jobs of the future need not be made redundant, just more data- and knowledge-intensive. Possible new avenues might include building-drone operators, robot resource managers, augmented reality architects, 3D and printing engineers.

If the next step in global productivity growth is to come from automation (like IT before it), construction-related jobs will be required to move from unpredictable (where the work is executed on site) to predictable (where the bulk of the work takes place away from the site). This will enable the higher use of robotics and automation. One way for that to happen is by Design for Manufacture and Assembly (DFMA), by which a product is designed for ease of manufacture and assembly, and can be applied just as well to the construction industry. In this case, the house is the product, to be manufactured off-site and assembled on site.

Needless to say, architects will require training in new skills that take advantage of innovative and advanced manufacturing techniques, skills such as robotics for fabrication and assembly, 3D printing and scanning and designing for prototypes. As a whole, design teams will need to break with the traditional form of a design team and a delivery team, bringing manufacturers and supply-chain managers into the team to work collaboratively from the concept stage right through to the creation of a prototype.

While most will be familiar with the concept of Building Information Modelling (BIM) as a 3D method by which to plan, design and construct buildings more efficiently, but not everyone will be as up to date with 5D BIM. This process will include time and logistical programming, capital costing, asset tracking and modelling of an asset’s whole-life performance, and is, therefore, a crucial part of a successful DFMA process.

Of course, there will always be a concern about the design outcome and a stigma attached to pre-fabrication of elements offsite, but new automated manufacturing techniques ought to allow for a higher-quality outcome and need not default to any form of limitation on design.

That being the case, it makes sense for the construction industry to catch up with other sectors and look seriously at the advantages of automation and robotics. The increase of productivity alone should be compelling reason enough. After all, the less time we have to spend on tasks that can be automated, the more we will have to spend on those that cannot – the decisions in design that reflect architecture’s human values. 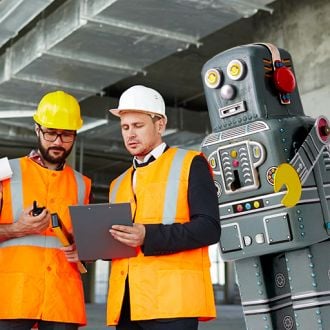