Our culture is embedded in our architecture. The height of our doors, the position of our windows, the shape of our houses and offices and the materials we use or do not use, to build them – all these choices reflect our heritage and our values as a culture.

It’s time that we thought more deeply about which cultures we represent, and which we do not, according to Rueben Berg, co-founder and executive officer of Indigenous Architecture and Design Victoria (IADV).

Berg, a Gunditjmara man who trained as an architect in Queensland, wants to bridge the gap between the architecture profession and the Indigenous community.

“Architects often fall back on clichéd ideas, and we want to raise awareness about what is possible,” he says. “We work with the architecture profession to get them to understand that Aboriginal architecture is a thing.” Ancient stone houses discovered in Victoria’s Lake Condah are examples of Indigenous housing.

“We want architects to draw on that heritage,” Berg says. “Not just to design a health service for Indigenous people, but for any project, they are doing. Every site has a 40,000-year history to inform the design.”

The Deakin Institute of Koorie Education, designed by Greg Burgess, is a positive model. “The building took account of our culture. For example, there is a shared kitchen – reflecting the culture value everyone is equal – rather than having separate spaces.”

Berg says architects are interested in Indigenous design, but uncertain where to start. “People tell me they don’t know how to do it or are worried they will cause offence.”

The first step to bridging the gap is to get to the IADV Cultural Competency workshops that focus on issues related to architecture and design. “Here you can learn about the history of Aboriginal people and architecture, learn protocols and language usage,” Berg says.
Berg co-founded IADV with Jefa Greenaway, the only registered Indigenous architect in Victoria (Berg isn’t registered here). Together, they want to encourage more Indigenous people to study architecture and to use architects.

The service provides public presentations and support and advice for aspiring Indigenous architects.

Berg reckons only about 20 Aboriginal people have graduated from architecture courses to date.

“We also want to encourage the Aboriginal community to be involved in architecture in different ways. When using architects as clients, we want to show how to get the most out of it,” he says.

“There’s little awareness of the architectural profession, partly because not a lot of Aboriginal people know what architecture is, and do not see a connection between culture and architecture. The more we can celebrate and acknowledge our culture through architecture, the more we can raise that awareness.”
Melbourne architects, Lyons, is the first practice to partner on a project with IADV: the relocation of the Koorie Heritage Trust.

A donation from one of Lyons’ principals, Carey Lyons, helped establish a new scholarship for students of RMIT’s Bachelor of Architectural Design or Master of Architecture which will give preference to Aboriginal and/or Torres Strait Islander applicants.

Some of IADV’s programs are government-funded – such as a summer school to teach kids about architecture as a career – and IADV has attracted founding corporate partners.

Its Cultural Competency workshops are a fee-for-service program, as are its consultancy services to architects.

IADV now has eight members, including town planners and landscape architects.
While studying architecture in Queensland, Rueben Berg worked part-time for Aboriginal and Torres Strait Islander Housing, a stand-alone unit of the Queensland Department of Housing.

Returning to his hometown of Melbourne, Berg took various federal and state public service roles. “I needed a break [from architecture],” Berg says. “I’d always wanted to be an architect but it was not quite as I imagined it. Taking the break gave me a fresh perspective, and I realised I have different skills to bring to the profession – it is not just about drawing lines.”

A role in cultural heritage management inspired the return to his profession. “Through that work that I saw the pitfalls in design,” Berg says.

Prior to co-founding IADV, Berg worked with the Victorian chapter of the Institute of Architecture, under its Reconciliation Action Plan. 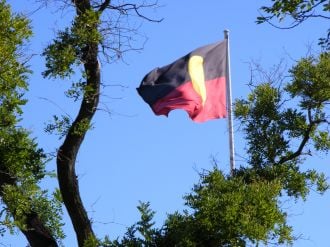