A future family day at their local library

Here at Hames Sharley, we like to invest in the latest technology. In recent years we’ve found great benefits in 3D printers and virtual reality hardware but our most recent investment – a time machine – has allowed us to see what life is like for communities in the future. Here, we follow the Mancio family as they set out for a day at their local library.

It’s Sunday morning and the Mancios climb into the pod of their autonomous vehicle, which glides away on its pre-programmed route to the local library. The family have been going to the Alexandria Memorial Library since the children were very young, back in the days when Luke and Olivia would book the kids into the onsite daycare centre – after a quick game of matching up rhyming holographic objects, of course.

Now the children are older there are numerous other facilities for the family to enjoy at the library, and today everyone has a different reason to get excited.

As their vehicle glides into a bay adjacent to the library’s grand entrance, Luke Mancio glances up at the building façade and smiles. The grand gum tree that frames the main entrance has stood there since the days when his grandad used to bring him to the library. Back then the building’s primary function was lending books that were printed on actual paper, a practice largely phased out following the deforestation crisis of the mid-2050s.

Olivia’s attention, meanwhile, is taken up by the library’s other greenery – the botanical gardens that surround the building. The curator of flora and fauna has carefully gathered a collection of the area’s indigenous plant and wildlife, and the results have turned the library and its gardens into an oasis of calm and tranquillity.

Stepping from the car, the family passes into the atrium, a vast, vaulted space decorated with literary figures such as Hamlet, Ebeneezer Scrooge and Grover. As the Mancios walk beneath the images, the characters come to life, acting out scenes from their books on the curved screens that line the walls.

And then they are in the main library itself, a huge temple to reading. Triple-height ceilings with panels of transparent graphene ensure that the space is huge and airy and flooded with natural light, the better to spend time reading by. And while old-school paper volumes are a thing of the past – unless, of course, you have special access to the antiquities archive, an environmentally neutral space that fills the entire basement level – the walls are still lined with books. These, however, are for display purposes only – reaching out to touch the spine of a particular book instantly downloads the back cover blurb to the reader’s personal screen, with the option to then acquire the whole text. Meanwhile, the room is misted with the subtle odours of paper and leather, to evoke the library experience of centuries past.

The central area is curved, with no hard edges, lending the library an informal and relaxed atmosphere. Gone are the days when libraries were seen as dark, intimidating places of learning alone, policed by staff who rigorously enforced the silence. Now the dozens of individual noise-cancelling reading pods provide visitors with soundproofed, comfortable and environmentally controlled niches in which to enjoy their books in peace.

For the Mancios, however, the first stop is the library’s in-house café for a spot of lunch. It’s a generously roomy space in which they have attended numerous functions in the past – the tables and booths can be easily repositioned, and the walls made of glass slide and lock into various arrangements to match the size of a given event. Today a large area has been opened up for a reading of the poetry collection North by North West: a 3D hologram of the late author takes centre stage as her appreciative fans enjoy her seminal work.

The family order and quickly decide to take their food into the main part of the library, each of them wanting to get to the different parts of the building that interest them the most. The youngest member of the family, Nate, is desperate to visit the gaming hub, where he intends to upload the latest environment skins for Pokéhunter to his pocket device. Before he can do that, however, his dad reminds him that he must attend to his homework. Nate’s school project on the topography of the region is due on Monday, and he needs to head to the enviro-science section of the library to trawl the interactive collection of rock samples before watching an animation of shifting geological plates and taking notes. He grumbles a while – isn’t it bad enough that mum and dad have paid for a virtual tutor to get on his case all week, without giving him grief now? – but eventually gives in. He knows how his parents will react if he fails another class…

Olivia, meanwhile, has been inspired by a recent visit to their local Shopperama, where she experienced some of the sights and sounds of a traditional Asian hawker’s market. At the time she made a mental note to take advantage of one of the library’s augmented reality booths and go for a stroll through the ports of the Malay Archipelago when the East India Company was at its height. The era has always fascinated her and after enjoying a short walk through the virtual streetscapes she is offered a list of further reading, video, audio and sensory files; she quickly swipes to store them in her personal digital cloud for later in the week. She checks her chronostrap and sees she still has time for a swift visit to the lifestyle section, where she calls up a holo-demonstration by Sir James Oliver, who is preparing a noodle dish. She is so swept away by the smell of the cooking that she doesn’t hear him ask her to pass the lemongrass.

Like her brother Nate, Becki Mancio also has some studying to do, but her school assignment requires human interaction: she is attending a talk by a local Indigenous elder on the history of the region. These sessions are always fun and today’s presentation closes with an interactive workshop on local crafts, in which Becki weaves a basket with materials gathered from the gardens outside the building. She completes the task quickly, however, because she has arranged to catch up with a couple of friends in the building’s SoundTech Studio. The girls excitedly greet each other before spending half an hour laying down tracks that bear a more-than-passing resemblance to their favourite band, Sixth Grade.

While the rest of his family are being educated and entertained, Luke Mancio has more mundane tasks to attend to. As well as evolving into cultural centres, libraries have grown to provide many of the civic services required by the modern family. All of the family’s bills are automatically dealt with via digital devices, but today Luke is required to attend a DigiLink kiosk in person to query an overpayment. He navigates quickly to the right part of the building, being more familiar with the layout than the rest of his family. Before it outgrew the incubator office space he shared with a dozen other companies, his business was housed here for a while on the upper terrace.

Once Luke arrives at the kiosk, the matter is dealt with quickly and efficiently by the staff member behind the desk – a real person rather than a holo or a bot, after it was decided many years ago that the human touch was appreciated so much more in these interactions. He’s silently grateful that he wasn’t making the same inquiry back in his grandad’s day. If he was, he might still be waiting for an answer.

Having completed his chore with plenty of time before the rest of the family are ready to leave, Luke decides to spend half an hour on his hobby of researching his family tree. Genealogy is a much simpler field of study now, with almost everyone’s lineage available going back generations. All it takes is a swipe of the hand on the Hologoogle apparatus. This afternoon, with a little guidance from a holographic Virtulibrarian, Luke elects to watch an avatar of his great, great grandfather driving a petrol-fuelled vehicle. Long since rendered obsolete, such archaic machines haven’t been seen since before Luke was born.

At last, an alert buzzes on the family’s personal devices, notifying them that it’s time to catch the live theatre performance in the library’s central courtyard. The GPS tech pinpoints them to the spot where they agreed to rendezvous, and moments later they are settling down for the show. Despite the wide use of holograms in most entertainments, when it comes to plays there’s still a love of real actors giving real performances. Today, the local drama school is performing a piece specially written for the show, and as the final act approaches, tablets affixed to the audience’s chairs notify them of the three alternative endings on offer. Olivia and Becki go with the happy ending, while Luke chooses something more ambiguous. Nate selects the tragic outcome – he ran out of time to download his game skins and doesn’t see why anyone else should have a good time either.

Most of the audience vote for the happy ending, and once it’s been performed, the Mancios file out with the rest of the crowd – their auto-car will be waiting to ferry them home again. But as they are about to cross back into the atrium, Olivia pauses. All this time in the library and she hasn’t even borrowed a book! She crosses to the Recommended Reading wall and immediately sees the latest Chronicles of Magic by Harry Rowling III. Tapping the book’s spine, she hears the reassuring ping of the download and hurries to catch up the others. Maybe she’ll even start reading on the way home. 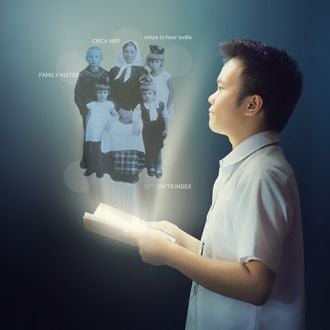