The other sides of architecture

“I think when people imagine architects, most of them picture someone sketching buildings at a drawing table. Many people outside the industry don’t realise there’s so much more to architecture – like financial administration, management of stakeholder relationships and project delivery. And for me, being on the ground and working with professional teams to bring our sketches to life, that’s the part which invigorates me the most. It’s that other side of architecture that really drew me in.”

Dustin Brade – or Dusty as he’s known around the Hames Sharley studios – doesn’t really consider himself a typical creative. With a self-effacing demeanour, Dustin comes across as pragmatic and considered. Not someone who’d likely run off to Kuala Lumpur on a whim.

But when Dustin found out about a new Hames Sharley project taking place in Malaysia, he put his hand up for the job without a second thought. And within two weeks, he was at a client meeting in the heart of Malaysia’s thriving capital city of Kuala Lumpur.

It was a bold move, but a huge step in Dustin’s career. A career which began with Hames Sharley during his studies.

“I joined Hames Sharley while I was still at university and spent the first two years post-graduation learning the ropes. Then I was given my first project - a laneway upgrade that cut through the middle of a shopping centre called The Mezz Laneway; a pedestrianised space filled with cafes and recreational areas.

“I got to lead the entire project from design development through to contract administration, and that’s when I realised how much I also enjoyed the delivery and management side of architecture. As much as I had always relished design, once I’d gotten a real taste of the full breadth of architectural services, including what it was like to see a project come to life, to work with different contractors and consultants, and help coordinate project timelines, it really resonated with me. I fell in love with my work and it’s been my motivator ever since.”

Following The Mezz Laneway, Dustin continued to work in the Perth office on a range of projects, always relishing the opportunity to see projects right the way through to completion. One of his most memorable projects was the refurbishment of the heritage listed Regal Theatre.

“The Regal Theatre is a beautiful, old, art deco theatre in Perth, but when they came to us it was desperately in need of refurbishment. We led a specialist consultant team in upgrading the compliance of the building whilst also undertaking design upgrades to a number of key items like replacing the auditorium chairs and implementing a new interior colour scheme that was akin to its former self.

“Because it was heritage listed there were additional approval processes in place. All Design changes had to be reviewed by the Heritage Council, and we also did a lot of community and stakeholder engagement to get their buy in for the work we were doing. The end result was great – we even won an award for it – but for me, it was the look on the faces on that small team of theatre custodians that made it worthwhile. They were so appreciative of the work and how beautiful it looked. It was a really special thing to be a part of.”

It wasn’t long after the theatre refurbishment that Dustin found himself in the middle of Southeast Asia.

Dustin recalls his first day in Malaysia, “It was all a bit surreal, to be honest. It really wasn’t in my nature to be so spontaneous and yet here I was, ready to spend five months in a foreign city over 4000kms from home. And little did I know at the time, but that five month project would lead to another much larger mixed-use project and I’d end up living in Malaysia for almost three years! It was definitely a surprise twist but it was by far the best career decision I ever made.”

Having grown up in the small Western Australian town of Borden – population 40-50 – Kuala Lumpur was about as far from home as Dustin could get. What was once a staple meal of roast lamb and mashed potato was now a fond memory amongst the spicy noodles and pungent aromas of the Malaysian street food.

But despite the sweltering heat and high humidity it was down to business from the get-go. As the lead project architect, Dustin was responsible for design input and reviews, stakeholder management and consultant coordination, whilst operating remotely from the team back in Australia. All while taking a crash course in local culture and learning to understand the nuances between the Malay, Chinese and Indian backgrounds that make up the city.

“The shopping centre refurbishment was definitely a career highlight. And because I got to stay in KL after it was finished, it was great to visit the centre once it was complete. Every time I caught up with the clients afterwards, they mentioned a new detail or design feature they’d discovered that they were enjoying. It was really satisfying to hear that those little value-adds the team had included had benefitted them so much.”

When asked about his mentors, the key influences in Dustin’s life are his parents, who have conveyed such a high level of moral behaviour and values in him, but are also building contractors, who helped foster his love of construction from an early age.

“We were always building things in and around the house. From Lego and cubbies to pieces of furniture, garden beds and fences outside. I’d spend time with them in the shed and would even spend my school holidays on site, watching houses getting built. I was always fascinated with seeing something get created from nothing – those were definitely the activities that paved my way into architecture.

“In terms of career mentors, I’ve worked with so many brilliant minds and amazing people at Hames Sharley. But if I had to call out one person who’s significantly contributed to my career development of late it would be Director and Studio Leader, Brook McGowan. He’s always been so supportive and made himself available to talk through issues and help me see the bigger picture. Brook was a key point of contact for me during my time in Southeast Asia and has continued to provide frequent support and guidance in my new role.”

Earlier this year, Dusty relocated from Southeast Asia to Hames Sharley’s Sydney office and has recently been appointed Studio Leader for NSW.

“The Sydney office is great! They’re an excellent team and have made me feel very welcome and the opportunity for growth is exciting. There’s already a really strong retail portfolio here, so one of the things I’ll be doing is looking at opportunities for growth in other portfolios, such as commercial, education and health, with a mindful eye on mixed-use opportunities.

“I’ve been with the company for almost ten years now, and what I love is that Hames Sharley really creates an environment that allows people to challenge themselves and grow. No matter what role you play or how long you have been an employee, a sense of empowerment and added responsibility is always just reward for those that honour their commitment to Hames Sharley – and I truly think that’s the secret to work becoming your motivator. So for me, beyond diversifying our portfolio range, it’s important to continue to foster those values in our staff. Because the work we do is one thing, but to have a passionate and dedicated team who loves what they do – that’s the real measure of success.” 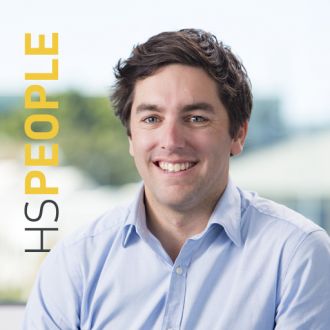