Hames Sharley was engaged as Principal Consultants by the Reserve Bank of Australia to provide architectural and interior design services. Hames Sharley’s responsibilities included the provision of architectural and building services, design documentation, and certification I, an accelerated program to complete the design, Design Development, Tender, Construction Documentation in to be completed by June 2021.

While only a small 315m2 space, the project is situated on a mezzanine floor within the note printing facility, a high-security environment within a late 1970’s Brutalist building that had not had significant refurbishment for many years. Due to changes in the working arrangements, teams, and security requirements for the facility, the RBA nominated an expansion of existing mezzanine space within the existing building to accommodate 3 meeting rooms, 16 workstations, kitchenette, and breakout spaces for the Property Team located at the Craigieburn facility.

The project needs to consider decanting the existing workforce and enabling 10 - 12 staff for temporary working arrangements within the same building during the Construction period. The project also requires reclassification from living quarters (existing use) to the workplace (future intended use) within a contrasting timeframe, requiring significant alterations to Fire, Mechanical, Electrical, IT, and significant refurbishment making the space inviting, functional and flexible.

“Playing with lighting was so important in order to make the space feel open and not cramped. We needed to really focus on sight lines and clever angles in order to get natural light to the furthest end of the wall plate.”

Initial works on the project involve holding workplace strategy and design workshops with the end-users and RBA management staff, understanding the drivers for change in the workplace environment, and how best to utilise the new space.

Following this Hames Sharley undertook numerous Test Fit reviews to provide options to the end-users on the best use of their limited space, with several creative, flexible workspaces for the team to enjoy upon completing the project.

The approved Test fit and concept plan has formalised the layering of existing travel paths throughout the building, thereby creating passages from the current interstitial spaces (spaces between spaces). Making a travel spine within the floor plan, one being east-west, the other being north-south, and freeing the remainder of the areas for additional meeting rooms or breakout spaces.

The Meeting rooms and Breakout spaces have been co-located and intend to function together, maximizing the team’s spaces to interact and to hold outside suppliers’ meetings.

Furthermore, this allows the simplification of the workspaces, combining similar activities and functions. In turn, this ‘grouping’ has reduced the need for acoustic treatments, structure, fire protection and provides a much more harmonious design. 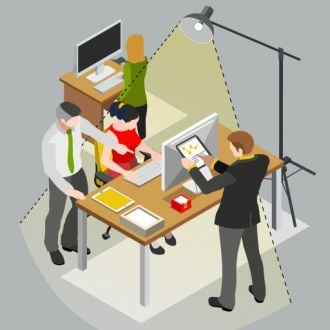 Bringing home into the workplace - why offices are embracing domestic design