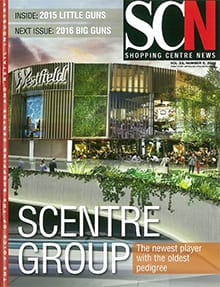 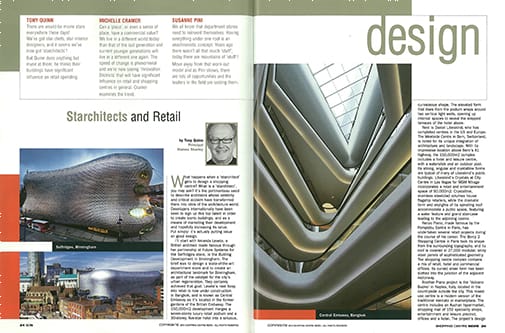 What happens when a ‘starchitect’ gets to design a shopping centre? What is a ‘starchitect’, you may ask? It’s the portmanteau used to describe architects whose celebrity and critical acclaim have transformed them into idols of the architecture world. Developers internationally have been keen to sign up this top talent in order to create iconic buildings, and as a means of marketing their development and hopefully increasing its value. Put simply: it’s actually putting value on good design.

I’ll start with Amanda Levete, a British architect made famous through her partnership at Future Systems for the Selfridges store, in the Bullring Development in Birmingham. The brief was to design a state-of-the-art department store and to create an architectural landmark for Birmingham, as part of the catalyst for the city’s urban regeneration. They certainly achieved that goal. Levete’s next foray into retail is now under construction in Bangkok, and is known as Central Embassy as it’s located in the former gardens of the British Embassy. The 150,000m2 development merges a seven-storey luxury retail podium and a 30-storey, five-star hotel into a sinuous, curvaceous shape. The elevated form that rises from the podium wraps around two vertical light wells, opening up internal spaces to reveal the stepped terraces of the hotel above.

Next is Daniel Libeskind, who has completed centres in the US and Europe. The Westside Centre in Bern, Switzerland, is noted for its unique integration of architecture and landscape. With its impressive location above Bern’s A1 highway, the 150,000m2 complex includes a hotel and leisure centre, with a waterslide and an outdoor pool. Its strong, angular and crystalline forms are typical of many of Libeskind’s public buildings. Libeskind’s Crystals at City Centre in Las Vegas for MGM Mirage incorporates a retail and entertainment space of 50,000m2. Crystalline, stainless steel-clad volumes house flagship retailers, while the dramatic form and skylights of its spiralling roof accommodate a public space, featuring a water feature and grand staircase leading to the adjoining casino.

Renzo Piano, made famous by the Pompidou Centre in Paris, has undertaken several retail projects during the course of his career. The Bercy 2 Shopping Centre in Paris took its shape from the surrounding topography, and its roof is covered in 27,000 modular, shiny steel panels of sophisticated geometry. The shopping centre complex contains a mix of retail, hotel and commercial offices. Its curved silver form has been slotted into the junction of the adjacent motorway.

Another Piano project is the ‘Vulcano Buono’ in Naples, Italy, located in the countryside outside the city. This mixed use centre is a modern version of the traditional mercato or marketplace. The centre includes an Auchan hypermarket, shopping mall of 150 speciality shops, entertainment and leisure precinct, offices and a hotel. The project’s design draws its inspiration from the surrounding landscape and, in particular, the nearby Mt Vesuvius volcano. The building’s form replicates the volcano and its crater, with its sloping, grassed, concrete-structure roof rising up to the edge of the ‘crater’, framing the centre’s main public piazza.

Another, perhaps lesser-known, Italian architect is Massimiliano Fuksas, who has completed quite a few retail centres and stores like Armani across the globe. The MyZeil shopping mall in Frankfurt, Germany, covers an area of 77,000m2 and includes shops, leisure spaces, restaurants and a fitness centre, spread over six floors. The centre has two differing sides, with the more fluid façade facing the Zeil – an important city boulevard – while the opposing side facing the Thurn und Taxis Palace is more formal in appearance. The façade on the Zeil is sucked into the great void of the centre, with its skeletal, curved glazing creating a dynamism, with its almost serpent-like form.

Another centre by Fuksas in Salzburg, Austria, known as Europark 2, is a 50,000m2 centre with over 130 shops, boasting the best sales performance per square metre in the city. This two level centre is divided into two large, glazed volumes, penetrated by serpentine skylights. On the exterior, the landscape design consists of artificial hills, bamboo forest and raised timber platforms. The rooftop car park and plant rooms have been covered in red painted mesh and steelwork, creating a playful and dynamic roofscape.

This small but exciting snapshot indicates we need to lift our game here in Australia, and put more value on the importance of design, and the fact that it sells and reinforces a brand.

Is the food court, as we know it, dead? Urban retail innovation, the role of retail in innovation districts
Latest News
12 April 2022