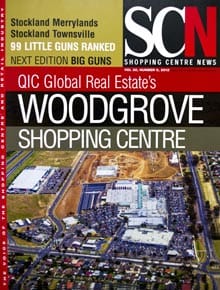 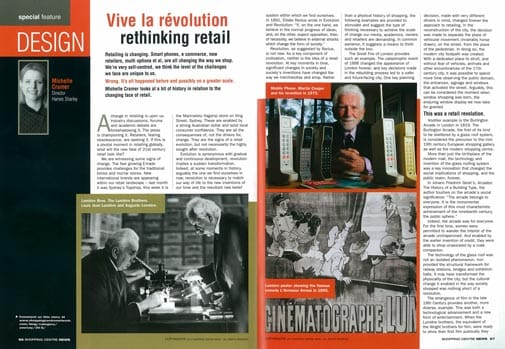 We are witnessing some signs of change. The fast growing E-trade provides an alternative to traditional bricks and mortar stores. New international brands are appearing within our retail landscape - last month it was Sydney’s Topshop, this week it is the Marimekko flagship on King Street, Sydney. These are enabled by a strong Australian dollar and localised consumer confidence. They are all the consequences of, not the drivers for, change. They are the signs of a retail evolution, but not necessarily the highly sought after revolution.

Evolution is synonymous with gradual and continuous development, revolution implies a sudden transformation. Indeed, at some moments in history, arguably the one we find ourselves in now, revolution is necessary to match our way of life to the new inventions of our time and the resultant new belief system we find ourselves within. As Reclus says, “If, on the one hand, we believe in the normal progress of ideas, and, on the other, expect opposition, then, of necessity, we believe in external shocks which change the form of society.” (From Elisée Reclus (1891), Evolution and Revolution, London: W. Reeves, Seventh Edition).

Another example is provided by the construction of the Burlington Arcade in London in 1819. The Burlington Arcade, the first of its kind to be sheltered by a glass roof system, is considered the precursor to the mid-19th century European shopping gallery as well as the modern shopping centre. More than just the birthplace of the modern mall, the technology and invention of the glass roofing system was a key innovation that changed the social implications of shopping, and the public realm, forever. In Johann Friedrich Geist’s, Arcades: The History of a Building Type, the author touches on the social significance of the arcade. He writes: “The arcade belongs to everyone. It is the monumental expression of this most characteristic achievement of the nineteenth century, the public sphere.”(Johann Friedrich Geist, Arcades: The History of a Building Type, Cambridge, Mass.: MIT Press, 1983, pp.428-37.) Indeed, the arcade was for everyone. For the first time in this historical era, women were permitted to wander the interior of the arcade unchaperoned. Enabled by the earlier invention of credit, they were able to shop unassisted by a male companion. The technology of the glass roof was not an isolated phenomenon. Iron provided the structural framework for railway stations, bridges and exhibition halls. It may have transformed the physicality of the city, but the cultural change it enabled in the way society shopped was nothing short of a revolution.

The emergence of film in the late 19th Century provides another, more diverse, example. This was both a technological advancement and a new form of entertainment. When the Lumiere brothers, the equivalent of the Wright brothers for film, were ready to show their first film publically they carefully considered an appropriate location. The decision was made to show “La Sortie des usines Lumière à Lyon” (original title), “Employees Leaving the Lumière Factory,” in 1895 at the Grand Café on the Boulevard des Capucines in Paris. In other words, the film was shown in a retail environment and was done so to capture the broadest audience possible and link the spectacle with a destination of consumption.

The appearance of cinema within the arcade was a natural progression. For example, film programs became an everyday event at the Salone Margherita of Naples’ main arcade, the Galleria Umberto 1, from 1896 to 1898. Guiliana Bruno records this occurrence in her “Streetwalking on a Ruined Map.” “Next to the theatre, and at the entrance to the arcade, were open-air film screenings. Films were projected onto a very large screen and were visible from the street. These public events were sponsored by the arcade’s department store…Cinema, housed in the arcade, was thus grounded in a locus of spectacle and circulation of people and goods, in a metropolitan site of diverse social configurations.” (Guiliana Bruno, “Streetwalking on a Ruined Map,” Princeton, New Jersey, Princeton University Press, 1993, pp. 38-43.) If the technology of the glass roof had made the retail experience accessible to both women and men, the technology of film embedded within the arcade defined the retail environment as a place of destination and spectacle, a definition that remains present and relevant in our current interpretation of retail.

What is the retail zeitgeist of our age? If history were to repeat itself, as it so often does, the proposition here is that the innovation and new technologies of our time – the personal computer (1950), the first mobile phone (1973), the smart phone (1992), the e, m and f commerce (2001), should significantly alter the way we retail and the relevance retail has in our contemporary city making, social interactions and cultural experiences.

We have some emerging statistics, such as “in Australia an item is purchased every four seconds this year using the Ebay app.” (smartcompany 2012). We see some retailers starting to experiment with technology, such as digital change rooms and multi-channel retailing. Convenience is considered essential to aiding our busy lives. Social media and commerce is a rapidly growing phenomenon that allows direct connection between the brand and the retailer to the consumer. But where is the revolution?