City biking, especially in Paris, is described as being as much of mental workout as a physical one, so in a bid to get more Parisians cycling to work safely, the city has invested in its very first bike highway.

As reported in City Lab, in 2015 the city voted unanimously to spend $164.5 million on expanding and improving its biking infrastructure – including its first bike highway the Reseau express velo (REVe).

“To this day, there’s a persisting stereotype of an average cyclist as a Parisian “bobo,” or hipster, biking in the city with a baguette in their front basket,” Hélène wrote.

“But Maguin stresses that this cliché is outdated as more people consider biking for getting around the city. All that’s missing is the right infrastructure to encourage more riders.

“The new REVe network aims to counter that. With these new bike lanes, the city hopes to see daily bike trips increase from 5 to 15 percent by 2020.

“The initiative will not only build highways for bikes, but it will also double the number of bike lanes from 435 to 870 miles, making the system more efficient and inclusive.”

Paris mayor Anne Hidalgo’s initiative to create a more bike and pedestrian-friendly city is also part of a multi-year plan to make the city greener, including goals to reduce car traffic on its roads and the air pollution it creates.

“I hope that biking gets to be considered as a viable alternative means to get around the city, and not just a project run by green parties for the Parisian hipster,” Maguni told Hélène. 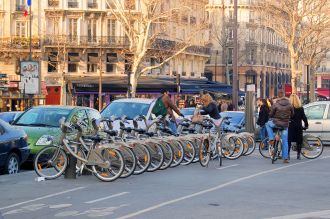