After two decades with Hames Sharley, Derek Hays has amassed an extensive resume of projects that includes Perth’s 100 St George’s Terrace and Forrest Chase Redevelopment. But it has been his establishment and leadership of the National Design Forum – a body dedicated to promoting design discourse across Hames Sharley’s national studios – that has predominantly led to his recent elevation to the role of Director. We talked to Derek about how he got started in the industry, the lessons he’s learned and how his finest moment is yet to come…

When did you first realise you wanted to be an architect? Was there a lightbulb moment?

I didn’t start off wanting to be an architect – I wanted to be a bricklayer. I grew up in a small country town and there wasn’t a lot going on most days, but every now and then a house would be built and after school I would be on my bike over there, fascinated by the whole process. As I got older and started thinking about it a bit more, I thought maybe I wanted to be a builder. That ultimately grew to wanting to be involved in the creation of what’s being built rather the building of it, and that led me to architecture. So, I pretty much had my heart set on being an architect from about age 14 or 15.

You’ve been with Hames Sharley for 20 years now. What would you say is the biggest change in the industry over those two decades?

It would be the speed at which we have to deliver projects, which has increased massively. I think it was a more relaxed profession when I first started. When I say ‘relaxed’, I mean there was more time to consider decisions. There’s more pressure on clients and developers now to get results, and get assets moving or redeveloped, and the speed comes in because of those aspects.

So, while we may be given a certain length of time to do a task, within that time we do quite a lot more because we’ve now adopted the technology that enable us to produce 3D graphics or virtual and augmented reality or whatever. The increase in tech within architecture has been great for us in terms of the speed in which we can test and discard ideas, but equally it’s been a bit of a rod for our back, as clients now expect a whole lot more in the same amount of time to communicate the same ideas. Gone are the days of all those great stories about Frank Lloyd Wright, who would literally disappear for two months and then ring the clients and wow them with beautiful sketches. It’s more hands-on for the client now and we walk through the process more than we ever did before.

Tell us about your path to the role of Director, and how the National Design Forum factored into it.

I’ve been with Hames Sharley a long time, and I’ve stuck around for 20 years because I’ve always enjoyed the people I work with and the projects we have delivered. In fact, I’ve seen the WA studio grow into the largest in the state and the wider national practice expand rapidly too. In that whole time the reality was that the people who made the jump to directorship were more often than not management-based, or portfolio or studio leaders. I looked at the roles each of those represented and just didn’t feel they were a good fit for me. I didn’t want to be director of a portfolio – I’ve worked in each of our ten portfolios other than defence and delivered significant health, retail, residential and commercial projects – I wanted a role that was more universal. That required a discussion with Managing Director Caillin Howard a number of years ago, about carving out a different route to directorship, if that’s where I was heading. That’s where the uniqueness comes in: to a degree, I almost wrote my own job description, discussed it with Caillin and it was agreed. That’s one of the reasons I’ve stayed here so long; there is this level of autonomy that has always existed here, right from the get-go.

The National Design Forum was born out of that job description, to drive design conversations within our business across all our studios; to help discourse and discussion about designing and creating the projects we are working on. One of the biggest components of the National Design Forum is the National Exchange, [a fortnightly multi-studio teleconference presentation], and that came from trying to promote greater clarity and greater communication between the studios. We are one studio across multiple locations but the communications between them was nowhere near as good as it is now.

My passion has always been those bigger, city-changing projects. Fiona Stanley Hospital was that for both me and Hames Sharley. So was 100 St Georges Terrace in Perth CBD – it was our first high-rise office tower with retail podium. Now we’re delivering QT in Adelaide, a 30-storey commercial tower in Brisbane, and Carillion, which is my project in Perth. They’re significant projects of a noticeable size within the city context, and I guess my passion is to keep on delivering projects of that size and scale.

When Carillion gets the green light, without doubt it will be the proudest moment of my career. It’s one of those perfect storms. There are problems in Perth CBD; the city doesn’t have a heart, in terms of retail. If someone asked where the epicentre of retail is in Perth CBD, you wouldn’t know. Carillion has the opportunity to change all of that.

So, it’s a dream project: it’s right in the heart of the city, it’s revitalising an old, past-use-by-date built form, and we’ve got a client who is aspirational about what they are achieving. We went through numerous meetings with the City of Perth and they were so on board and supportive of everything we said. At the Local Development Assessment Panel [LDAP] meeting, we literally could have sat back and let the City of Perth do the presentation. They were selling the design to the LDAP members more than we were. It will be a big game-changer for Perth but also for all of what Hames Sharley has been working towards in terms of delivering a truly, iconic mixed-use development.

What advice would you give to newcomers to the industry, based on your 20 years of experience?

One thing that’s become more front-of-mind over the last seven or eight years is the power of collaboration. Really great projects, in the context of what we do here, aren’t necessarily under the authorship of one person. Our Executive Chairman and founder, Bill Hames has always said that everyone’s got an idea, and everyone can have a good idea. I think that’s a really strong point at Hames Sharley, that we’re open-minded with all the ideas that come to the table. Sometimes someone throws an idea out there that changes your thinking a little bit and compels you to create something better than it would have been if they hadn’t made that comment.

Listening is probably the other incredibly important part of what I’ve learnt over the last 20 years. You’re there to solve a client’s problems through the built form so you’ve got to truly listen to what they want. You’ve got to listen but then bring your expertise and understanding and take them on the journey. It’s a balancing act. 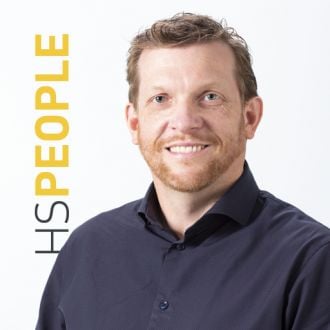