Attack of the $350 Billion Retailer…

It’s coming… a giant of the retail industry, dwarfing its competitors as it strides into view, trampling traditional Australian shopping culture into the dust, and smashing any who stand in its way.

Yes, it’s safe to say that the imminent arrival in Australia of sales monster Amazon has generated no small amount of fear in retail circles. Already local shopping concerns are doing the equivalent of stockpiling canned goods and shoring up their homes with sandbags, and really, who can blame them? There’s not a great deal of room for interpretation when Amazon employees are quoted in the Australian Financial Review as saying, “We are going to destroy the retail environment in Australia.” (At least, that’s how the situation was painted for Watermark Funds Management’s chief investment officer, Justin Braitling.)

The strategy for Amazon’s presence in our country is simple enough: undercut the opposition so dramatically that consumers would have to be idiots to shop anywhere else. With Australian retail markups among the highest in the world, there’s plenty of room for this American interloper to manoeuvre – Amazon’s current promise is to trim 30 percent from its competitors’ prices – and the phrase “Your margin is our opportunity” is being bandied around with increasing frequency as a mission statement.

And the company isn’t likely to limit itself to its usual online methods. We can expect all the bells and whistles of US Amazon (its subscriber service, Amazon Prime, has upgraded to guarantee delivery within an hour) as well as a grocery shopping alternative, Amazon Fresh, the launch of which is responsible for the delay of the company’s rollout until September. We could even see a bricks-and-mortar version, depending on its success in the States; Amazon Go requires you to log in with your mobile then walk the aisles, selecting your goods and trolleying them. When you’re done, just walk out – your phone is pinged and your bank account charged without the need for a checkout. These advances all beg the question of how far are Amazon prepared to go? If the world of eCommerce is so wonderful then why invest in physical outlets at all? Is Amazon succumbing to the inevitability of the need for a more humancentric, interactive approach?

Obviously, it’s hard to tell what the exact impact of all of this will be; the data just isn’t available as to how far Amazon intends to go to engage with real-life customers as opposed to online. Analysts, however, are suggesting local retailers could be hammered to the tune of $4 billion.

Local retail moguls like Gerry Harvey are talking a good game – he’s become a symbol of the resistance, swearing to take the fight back to Amazon, an Aussie David to Jeff Bezos’ Goliath – but how on earth can you compete with a well-drilled organisation that has indomitable global brand recognition, a reliable reputation and, let’s face it, better prices?

By changing the rules.

Clearly, a straight fight is out of the question – price point versus price point, there can be only one winner – so Australian retailers need to start thinking differently. It’s not enough to declare constant sales and rolling price reductions; when it comes to attracting shoppers, the exchange of money itself needs to be (whisper it) secondary.

Scary as it may look now, Amazon’s foray into Australia is more of a symptom than a cause; in truth, retail has been on the cusp of great change for a while now. It’s a gradual process – an evolution, not a revolution – and one about which Hames Sharley has been assembling data for some time, following retailers’ early panic adoption of technology when e-commerce first hit the scene. And the thinking behind retaining consumers, whether it’s in the face of buying online or buying from cheaper physical stores, is much the same: stop selling them products and start selling them destinations. In short, retail needs to become a matter of place consumption.

The approach is simple enough, and it all ties into the concept of Dwell Time – how long today’s time-poor consumers can be encouraged to spend at a retail centre when they could save precious hours simply buying online, for example. It’s no longer sufficient for a retail environment to offer products alone. Instead, consumers must be attracted by a “whole of life” approach to shopping, where they can buy what they need, but also benefit from a more holistic experience.

Here’s an example: a few years ago, French clothing retailer Colette opened an “ironing school” in its basement. When a male customer purchased a shirt, he was made aware of the classes and encouraged to sign up for a pressing engagement. At that moment, the retail transaction became less about the moment of purchase, and more about what comes after. Not only had the consumer bought a shirt, he’d also the acquired the skills to take care of it in the months following. Hot on the heels of the ironing academy came an in-store yoga school… The shopping experience has become educational and enriching as well as transactional.

London department store Selfridges has also been experimenting with this “whole of life” style. In 2014, it held a Dance Party, at which customers were encouraged to let their hair down, learn some uncomplicated moves, and experience how ‘dance happiness’ can change consumer behaviour. It was a simple touch of theatre that surely stuck in the minds of customers, engendering loyalty to the Selfridges brand far above that generated by low prices.

So yes, soon Amazon may be in the strongest position to compete with Australian retailers on price alone, but local outlets should be more than capable of holding their own by offering the things money can’t buy: lifestyle, experience, and knowledge. Shops no longer need to supply just food, or clothes, or paint, or nappies… they can participate in making the human condition itself more fruitful and advanced. 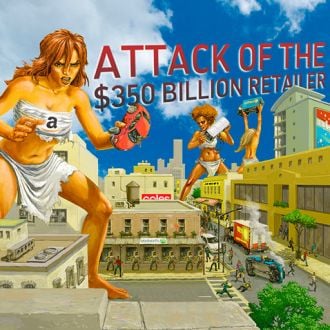