How app developers are creating infrastructure networks without lifting a brick

A decade ago, it would have been hard to imagine that a piece of software could reduce the load of a major public transport network by tens of millions of people each year. The software is ephemeral, people would have said. You can’t live in software, you can’t park a car in it or drive to work in it.

But that was before the age of collaborative consumption. French ride-sharing platform BlaBlaCar, which connects drivers with empty seats with people looking for a ride, now claims to transport more people each month than the Eurostar – the high-speed rail line connecting London, Paris and Brussels.

The dawn of apps like Uber, Airbnb and thousands of others have shown just how wasteful city administration has been. Huge efficiency gains can be made by utilising excess spaces, excess seats, and, well, excess anything else.

“[BlaBlaCar] is a brilliant example of creating a new transportation infrastructure out of an existing resource, namely empty seats in cars,” says Rachel Botsman, founder of Collaborative Lab and widely considered a thought leader of the ever-growing “collaborative consumption” movement.

“All of these examples have a central principle that is core to most urban planning goals: increasing utilisation of resources and improving efficiency. They are using technology to unlock ‘idling capacity’, the untapped social, economic and environmental value of assets, and create more efficient systems of matching supply and demand.”

In the same way that the invention of solar panels or hydropower or nuclear energy created new demand for unutilised resources, so, too, have the myriad collaborative consumption platforms popping up around the world.

Botsman points to JustPark, which matches drivers to unused commercial and private parking spots (like that unused second car spot in the driveway), as well as bike-sharing platform Divvy, as other examples of systems simplifying the user experience and taking traffic off the roads.

“It is estimated that 30 percent of urban traffic is people circling looking for parking and that people will waste 102 hours of their lives in search of a spot,” Botsman says. “So why not take all the underutilised spaces available for parking and put them in a marketplace?

Other startups like Cargomatic are trying to make more efficient use of freight trucks and containers.

There are others in the pipeline that Botsman thinks has great potential. Startup Getable has created an on-demand rental marketplace for idle tools and construction equipment. And Munirent makes it easy for public agencies to share equipment.

“It’s crazy when you think about it that one council has, say, a road roller that is sitting there not being used and another council spends thousands of dollars buying another roller that will also be underutilised,” Botsman says. “Don’t governments have a fiduciary responsibility to figure out how they can better use abundant public resources that are sitting idle?”

Then there are the space-sharing platforms, which match supply with demand for things like gardens (Landshare), offices (Liquidspace), storage (Sharemystorage) and retail (Storefront).

One is Melbourne startup Hotdesk.net, which was launched in July 2013 and allows people with office space to hire it out on demand. Most of the spaces advertised on the platform are commercial co-working spaces, says founder Steve Glaveski, but he estimates about 30 percent are existing businesses with some space to spare.

“That’s about increasing their working capital when they’re paying for this space that nobody is using,” Glaveski says. “But it’s also about bringing new people into the space and changing the dynamics with new people and new ideas.”

Big enterprises, with secrecy around their intellectual property and large workforces, don’t usually go for this he says. But small and medium enterprises are often happy to coexist.

“I think the old way where businesses operate in isolation, that’s changing,” Glaveski says. “A lot of businesses see the value of exchanging ideas.”

It’s early days but the number of inquiries coming through Hotdesk has increased tenfold in the past year, albeit off a relatively low base, Glaveski says.

And it’s not just about utilising wasted space. It also takes traffic off the road by allowing employees in flexible workplaces to work in spaces close to home. The business is now expanding to Asia.

Despite the potential gains in city efficiency, the relationship between collaborative consumption startups and government officials isn’t always cosy.

In Victoria, taxi services commissioner Graeme Samuel has ordered a crackdown on Uber, the car service that is shaking up the taxi industry, accusing it of “thumbing their nose” at regulators. Airbnb has been accused of operating illegally in cities including New York.

Botsman says regulators, who once thought this was a passing fad, have failed to appreciate the gains on offer and struggled with how to regulate businesses that don’t own the assets they offer.

“The biggest mistake I see regulators making is the belief that they can reverse the consumer story,” Botsman says. “Take Uber. Many people were not satisfied with existing taxi offerings – did regulation bring reliability, consistency, or even a safe experience? Once the genie is out of the bottle that a new way exists and the public decides that new way is better, no regulator can reverse that story.”

But Jennifer Evans-Cowley, Professor of City and Regional Planning at The Ohio State University and a leading thinker in planning and technology, says cities are doing their best to think through the implications of new systems in a disruptive age.

Sometimes the relationship can be unexpectedly rosy. Uber has reached an agreement with Boston authorities around data sharing. And Portland, through the Oregon Department of Transportation, has partnered with GPS tracker Strava for bicycle routing information.

But authorities also have legitimate concerns, like data privacy. “As an example, one of the ride services conducted a data analysis and reported out the extent to which people were using the service for ‘overnight hookups’,” Evans-Cowley says. “This kind of thing is what should have residents concerned about their privacy.”

“Cities are for the most part being thoughtful in saying, wait a second, let’s think about this,” Evans-Cowley says. “What are the implications of these new services/technologies. How can we partner?” 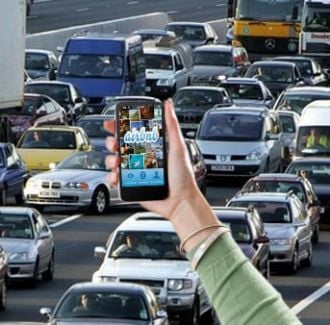