Why the arcade is ‘almost right’

This article is an appraisal of the arcade as a precursor to the department store and a consideration of why the arcade as the spatial type is ‘almost right’. It is a critique of the Queen Victoria Building (QVB) and The Strand in Sydney as exemplars of this type and suggests the idea that what is old and works well may be used again.

The appraisal positions the arcade as a historic urban retail typology made relevant once more and sets criteria for what makes a shopping environment urban. Considered foremost is the principle of passage through the built form as part of a long journey through the city, and that a visit to the city is eminently experiential.

The Arcades date to the ‘Belle Epoque’, a period of relative stability and prosperity in Paris in the latter half of the nineteenth century. The arcades predate and engender the department store. They were a backdrop to bourgeois city dwelling; of idle leisure time spent actively, of promenade and curiosity, the exploration of their surrounds. Walter Benjamin in his project on Paris’ Arcades describes the urbane sophisticate and observer, the ‘flaneur’, a purposefully errant wanderer of the city’s walkable paths and arcades who submits to the unknown in search of novelty, beauty and authenticity. He discovers ‘the city as something bristling with mystery, and the sense which he always keeps alert is that of curiosity….’ - Cesare Pavese as quoted by Italo Calvino in ‘The City as Novel in Balzac’.

Benjamin reveals the mechanism by which the ‘flaneur’ later became trapped within the wholly contained interior of the department store – when the culture of the authentically experiential stroll was replaced by one of controlled suggestion: where the ‘flaneur’, upon crossing the threshold of the department store, was no longer the curious yet uncommitted passerby, but, without even considering a purchase, was instantly turned customer and bombarded by the owner with entertainments, ornaments, veneers and every kind of ersatz. The real sensory immersion of the arcades, with its aroma, temperature and hubbub, was pared down to its smooth commercial essentials in the department store – shopping was no longer a part of city life, and the environment in which it occurred was an illusory substitute for the real.

The open and urban nature of the arcade exists in contrast to the hermetic and labyrinthine container that is the modern-day department store and suburban shopping centre – the critique that follows juxtaposes the passage of the arcades with the ‘scripted disorientation’ of the shopping centre (as described by Daniel Herman on Jerde in the Harvard Design School’s Guide to Shopping).

The QVB arcade is essentially outdoors, gated only at night after the last train leaves Town Hall Station. It is a sheltered street, or laneway, bathed in daylight and naturally ventilated. Apart from its wrought iron gates, which are seldom shut, it is completely open at its ends, democratic, accessible to all.

The natural ground plane slips in through the gates on York Street and leaks out downslope on George Street with no level change or threshold to arrest its progress. The patterned mosaic tiling transforms the ground to liquid so that it seems to heave as it sounds with the clicking heels of the thronging crowd who slide in through its gates with the same unencumbered ease.

Essential to the success of both the QVB and The Strand arcades is the ability for the pedestrian to see, before entering, the path through to light and release from the space at its end, to know that the passage connects them to the ‘other side’ and furthers their journey and purpose from one requirement to the next.

John McMorrough writes on post mall urbanism in his essay ‘City of Shopping’ (Harvard Design School Guide to Shopping), that ‘through the interiorised activity of the department store shopping’s function as the urban connector was lost’. He praises the arcade as ‘an evolved version of the street’ and a ‘connective element fully imbricated within the urban pattern…’ In this description, he echoes a previous description by Dulaure: that the arcade is a ‘lovely work of art framed by two neighbourhoods’. Thus, the real achievement of the arcades is that they have the potential to reconnect completely different environments, each with their own unique character, to be explored by those progressing from one to the other.

Uncontained, essentially external, the Arcades permit the pedestrian their freedom, then, once oriented, the invitation to browse wares on display willingly and at leisure. As functioning arteries of the city’s circulation, the arcades facilitate a constant flow of pedestrian commuters, residents, tourists, businesspersons and workers between one requirement and another. The simplicity of the mid-block connection, its freedom, its lack of threshold, it’s semi-interior is bathed in light and open at either end for passage between ordinary needs: station, workplace, market, quay, and residence.

Compared to the aridity of the suburban centre, the city arcades, because they remain surrounded by varied and accessible activity, sustain visitation by curious explorers. These tourists in their own city are engaged in a topographical exploration of their city’s fabric – it’s walkable paths, it’s laneways and arcades – and being tourists, thirst for authenticity in environments frequented and activities sought.

Diametrically opposed to the passage, as building type, is the labyrinth. Our modern-day department stores and shopping centres are huge hermetic containers with labyrinthine circulation, where beige and vanilla floor tiles are odourless and the air monochromatic, and customers are manipulated to perambulate in inescapable circles and on ceaseless escalators. Air conditioning subtracts aroma and rarefies our experience of space just as fluorescent light empties it of all ambience – our capacity for perception is compromised in the pursuit of comfort and a technocratic requirement for control. This type of overly engineered space results in spatial estrangement – alienation and anxiety as a psychological and spatial condition.

That the labyrinth as building type succeeds in its ensnarement of the consumer is certain, this has been understood since the advent of the souk and bazaar and it has evolved via the arcades and department store into the modern suburban shopping centre. To work on us it imposes a ‘transfer’: engineered dislocation and a manipulative hypnosis that renders the unguarded consumer palpable – open to suggestion and advertisement that is arranged to bombard at each juncture. The spell breaks as soon as the more reluctant participant realises they are disoriented – then anxiety sets in, the customer is lost and must, out of a necessity brought on by their phobia, escape.

The arcade is the antidote to this predicament; it shows us the way out.

As passage, the arcade can be used to break through monolithic mega-structures and reconnect former neighbourhoods. Suddenly the monolithic suburban shopping centre is the catalyst to a regeneration of its immediate context and the newly externalised and traversable centre is a participant in a wider network of activities. Equally an understanding of the power of retail mechanics and circulation can be employed to reclaim and energise abandoned and disused fragments of the city centre. The arcade is the typology that opens up these opportunities through connectivity.

This article was first published in Shopping Centre News, May 2015. 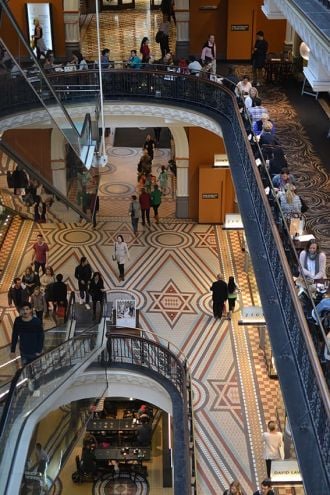