Building for the Biennale

With the Fremantle Biennale closed for another two years, we look back on Hames Sharley’s contribution to the specially created artworks.

After three weeks of presenting site-responsive installations and art across a host of sites in the port city, this year’s Fremantle Biennale wrapped on 24 November. Set up with the aim of promoting new ideas about and interactions with the city’s historic and cultural backdrop, the festival programme incorporated more than 20 projects that showcased the work of local, national and international designers and artists.

On the menu was a series of 13 separate works spanning the Fremantle shoreline, each capable of being viewed alone but combining to form a visual art trail from Victoria Quay to the Fishing Boat Harbour. Going under the blanket title of UNIT, the works were undertaken by a range of Perth architectural practices, including Hames Sharley, which created the fourth stop on the trail, an installation called Fluther.

“The site we were given was next to the Maritime Museum in Fremantle, surrounded by port buildings and in close proximity to the HMAS Ovens submarine,” says architecture graduate Oliver Fenner, who worked on the concept and creation of the project. Taking the form of a cube of scaffolding over which floated a jellyfish-like shape, Fluther encouraged viewers to place themselves beneath an imaginary sea and become part of its undercurrent.

“The jellyfish sculptures also connect the pavilion to the submarine because submarines are like man-made jellyfish drifting through the ocean,” Oliver explains. “And like an attack submarine, the man o’ war jellyfish is powerful enough to kill. The scaffolding was a reference to the construction industry of Perth, in which Hames Sharley plays a big role.”

Recycling was a major consideration of the piece, not least because plastic pollution and global warming were thematic focuses of the Biennale as a whole.

“Early in the process, the team agreed to use as much recycled material as possible,” Oliver says. “We tried to minimise the amount of waste created and that was a challenge in itself. But we managed to make the entire pavilion out of 100 per cent reusable or recycled materials, and the final result has a unique aesthetic because of it.

“The jellyfish objects are made from fishing nets and recycled plastics from local retailers, referencing the boating community of Fremantle and the area’s long connection with the ocean and river.”

With the nets supplied by Northern Star Ocean Products, the recycled soft plastics that filled them sourced from local retailers, and the scaffolding provided by ICS, the team’s environmentally conscious approach generated a pleasing level of community interaction.

“It was an opportunity that doesn’t often come up for centres, local grocery stores and seafood suppliers, trying to source enough material to fill a 5x5m cube,” Oliver says. The project was also supported by local businesses such as Blue HQ, who helped fund the effort. “Everyone we came across was extremely keen to help, which I think was because it was something new and exciting. The people we met and their positivity about the project was extremely nice, and definitely an abiding memory.

“Besides the added activation and boost to the local economy that events like Fremantle Biennale create, the process deepened my knowledge of the area. Community events like this connect people to the places where they are held and make them more likely to visit in the future.”

Hames Sharley would like to thank the Biennale Organisers and the UNIT team for all their help and assistance. 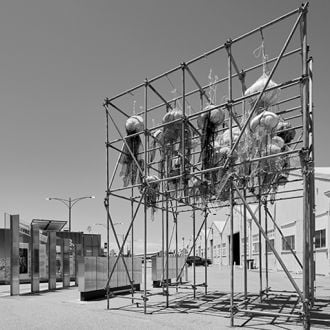