Whether it’s Scott Morrison getting his underwear in a bunch about signage or the toy company behind Barbie launching a range of dolls that can be identified as either male or female, gender neutrality is becoming a topic that is garnering a great deal of attention lately. And with inclusivity an important consideration in all modes of design, it’s worth celebrating the milestones when we reach them.

One such marker was passed in September with the launch of the first non-gender-specific toilets in Darwin’s Casuarina Square shopping centre. The rest rooms were born out of a number of conversations about community engagement, resulting in centre owners the GPT Group consulting with Hames Sharley on the design of fresh facilities.

The new toilets have already received positive feedback from the public, suggesting Casuarina Square could act as a model for similar updates to refurbishments in other centres and public spaces around Australia. In that regard, they would reflect an increased presence of unisex facilities all around the world in recent years.

Colleges and universities have been pioneers of the practice, with some UK student halls featuring non-specific washroom facilities as far back as the early 90s, and more than 150 US campuses including unisex public toilets by 2014. A year earlier than this, Brighton and Hove City Council in the UK introduced public conveniences that bore neither the traditional male nor female symbols on the doors, displaying non-specific icons instead. Similarly, the Vancouver Park Board made its first moves to introduce gender-neutral toilet signage in 2014, with the city as a whole becoming the first to change building codes to require unisex facilities in public buildings.

Although rest rooms are also adopting non-specific gender useage in several Asian nations – perhaps signalling increased acceptance of a more diverse outlook – by all accounts the move towards greater inclusivity may take some time yet. However, the gradual acceptance that neutral ground can be found is surely a sign of positive change ahead. 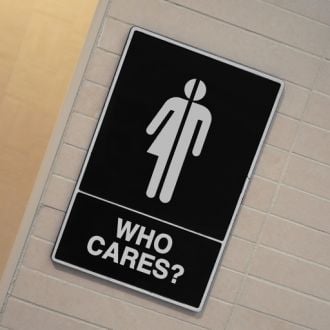