A Look into the Future of Building Information Modelling

As Tony Abbott continues his push to become Australia’s “Infrastructure Prime Minister” – laying the groundwork for a global infrastructure institution to be established as part of the November G20 talks in Brisbane - government and private sector building and infrastructure owners are being asked to build more, with less.

Increasingly, those owners and the architecture, engineering and contracting firms working for them are wising-up to the productivity benefits and cost savings that new design technology will bring for the industry - specifically the Building Information Modelling system, or BIM.

The evolution of BIM

BIM works like a virtual rendering of the project, but differs from technology like CAD (computer-aided drawing) because all the parties involved can input their own design information as the virtual project is being ‘built’.

Critically, BIM goes one step further and enables 3D designs that include the characteristics and functionality of the project, to be overlaid with millimetre-specific data about everything from the measurements of individual components, through to a three or four-decade timeframe for maintenance that will streamline future operations.

A 2010 report from Allen Consulting Group, commissioned by the federal government, found that BIM could improve productivity between 6 percent and 9 percent, and estimated that consistent adoption of the technology through the building sector until 2025, with usage at about 16 percent, would mean an economic benefit of $5 billion for Australia’s GDP.

Jump to 2014, and a McGraw Hill report released in March showed that 50 percent to 75 percent of firms expected to be using BIM by the end of 2015 on more than 30 percent of their projects. A positive return on investment was reported by three out of four firms using BIM, with one in three reporting a ROI of more than 25 percent.

Founder of BIM and design technology consulting firm AEC Connect, and chair of the BIM steering group at Australian Institute of Architects, Dominic Holzer, says architects first started using the technology in its early form nearly 20 years ago, but in the past three to four years it’s becoming “standard practice” for them, with more engineers, collaborators and contractors also coming on board.

“Owner-operators haven’t quite seen what is in it for them. They are quite cautious, waiting for somebody to take the lead in Australia. In other countries the situation is a bit different,” Holzer says.

The UK government mandated the use of BIM about three years ago.

“The BIM required in the UK is not just to facilitate better management of architects and engineers but is specifically targeted towards information management and handover to owner-operators on government projects”.

In Australia, buildings like Coca-Cola Place, and 1 Bligh Street in Sydney are examples of commercial construction projects using BIM, while oil and gas giants like Woodside are ploughing money into research on BIM potential for their infrastructure.

Key health clients are starting to request BIM use, Holzer says, with the Perth Children’s Hospital, and the $1.85 billion Royal Adelaide Hospital upgrade already using it.

National BIM manager of architecture firm Hames Sharley, Brook Lawton says the savings potential is huge. “The cost of fixing mistakes on site is disproportionate to how easy it is to fix on a computer before construction starts. But it’s hard to put a dollar value on it”.

The technology means zero product wastage on sight, zero mess and zero time wastage because every part of the construction process can be pre-planned, right through to when the manufacturers in China will cut and compile certain components for shipping.

Lawton says there’s even capacity for offshore manufacturers to be told exactly what order to pack the components for shipping, to make unpacking on site more efficient.

But Australia isn’t quite there, yet

“It’s like when everyone went from drawing boards to CAD… It’s not that people changed because they saw everyone else was changing to CAD, it’s because they realised they weren’t winning jobs without it,” Lawton says.

The same is happening, he says, with BIM technology. The Australian government is “very close” to mandating BIM on its projects, he says: the NSW State government already has made it a requisite for their infrastructure projects, from everything from roads to hospitals.

A July report about boosting infrastructure productivity from the Productivity Commission recommended that BIM is considered for use on government projects because of its cost benefits and whole-of-life project potential and that government designs should be provided in BIM format from the outset.

The benefit of a government mandate will be to bring about a more formal set of BIM systems for usage. The not-for-profit group, NATSPEC, is already a leader in the industry in publishing guidelines and documents on how to ‘get started’ for newcomers to the technology.

A change of mindset

BIM might be heavily based on technology, but Dominic says the thing to remember is that it’s a process, not a technology. “People sometimes think it has to do with buying a piece of software but really it’s about a process and a change of mindset in how we approach projects”.

While Holzer says the potential for BIM is extraordinary, the software is expensive and requires annual licensing fees, and staff still need to be trained how to use it.

“It’s not a silver bullet, there is a lot we still need to work on and there’s a lot of development happening in the BIM space, smaller organisations certainly struggle with it.

“But this is where the future lies: connecting building data with other data and resources to tackle societal problems in that context”.

About the author: A lawyer-turned-journalist for the Australian Financial Review, Claire Stewart now works as a Sydney-based freelancer, combining business writing with reporting across the Middle East, Afghanistan and the Pacific. 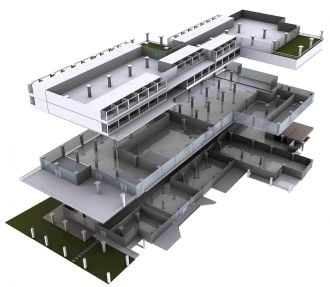