Tech in the (future) city

The hum of the city is getting louder and with almost three-quarters of the earth’s population residing in urban spaces by 2050, we are bracing to turn the dial up to eleven! Punctuating the urban landscape of the future will be the beat of the footprints of technology. By 2050, Cisco forecasts that there will be 50 billion devices connected to the internet. The interconnectedness of technologies, known as the ‘Internet of Things’ is progressively transforming the urban landscapes we live in. In the next few years, we are poised to see upwards of 16 billion everyday devices connected to the web, from household appliances to cars, billboards and shopping trolleys.

What’s changing, now and in the future

Sensors already relay data about our energy consumption, the temperature and traffic conditions, for example – components that we now refer to as ‘smart grid’ systems.

But the implications for device connectedness in urban planning for public places are far-reaching.

Technology is at the heart of urban design innovation and strategic thinking globally to address our way of living, working and commuting in the future. Technology, it is suggested, will help our cities cope with the twin issues of sustainability and rising population.

Futurist and sustainability specialist Maria Atkinson of Atkinson Consultancy, says that we will soon see the rise of the ‘city activation’ model, which essentially activates new spaces by bringing them alive with features that encourage us to stay and enjoy, not just move through. “Government will have an extraordinary role in designing, from a precinct and planning level, to ensure that every part of the urban streetscape and open space is utilised,” she says.

This vision will include creating new green urban public spaces, as well as renewing existing facilities with parkland-type features.

The trend of multi-functional usage of buildings will emerge as a major sustainability feature, Atkinson says. “The notion of a single use for dwellings will quickly collapse. Shopping malls will feature accommodation, childcare and healthcare facilities and other support services. High density will produce high levels of creativity with the use of space,” she says.

Urban planners, architects and future city strategists know that building eco-friendly, digitally connected houses is not enough to create a new model of sustainable living to cope with emerging population pressures. What is needed are vibrant communities.

Creating parkland and public spaces, as mentioned by Atkinson, helps create bio-diversity and micro-climates. It also provides a role for retired senior citizens to play as well as a place for children. For example, if older generations share spaces with children, this improves general safety (passive surveillance) and can be supplemented and supported by 24/7 camera systems that also monitor safety and security.

While technology can alienate, it can also provide cohesion. Mobile phone usage is actually increasing tendencies to linger in public spaces, according to recent research from Keith Hampton, associate professor of communications at Rutgers University in New Jersey, US.

Hampton says that technology use in public spaces needs to be factored into conceiving urban design. “Just as we would provide water fountains, food, or other amenities, we have to think about how the infrastructure of these technologies fits into public spaces. Power outlets, table sizes that accommodate different types of uses, seating arrangements that encourage different types of interaction – on and offline.”

Atkinson adds that the future of public spaces will also feature a “push and pull” technology streaming effect, meaning that information will be streaming from public outlets such internet-connected public screens and from the individual via Google Glass-type wearable technology.

“Through the widespread use of big data, telematics and automated flows of information in the public space we will witness a level of personal and public connectedness that will be unprecedented and we need to design for that,” she says.

The rise in population will lead to a boom in high-rise living in urban spaces, another factor that will accelerate demand for well-designed public spaces.

Micro-apartments will have a growing and legitimate role in the urban housing market, says Tony Arnel, global director sustainability at the engineering company, Norman Disney & Young. “The ageing baby boomers want security and amenities and proximity to where things are,” he says. As well, the pressure for affordable inner city housing is contributing to smaller apartment footprints. He notes that micro-apartments will alter our concepts of how we engage with the city, forcing apartment dwellers into public spaces for leisure, eating, entertainment and socialising. Cityscapes will have to accommodate that rise in demand.

Vertical living is also driving innovation in transport technology, with futurist Ross Dawson suggesting that the concept of “hyper-speed vertical train hubs” could have a place in future Australian cityscapes. This extraordinary innovation involves small train carriage “pods” travelling vertically up magnetic tracks on the outside walls of high-rise apartments so the passenger can alight. Using swivel seating similar to those on Ferris Wheels, the passengers are not tipped onto their heads!

The futuristic high-speed trains – already underway in Asian cities – also act as technology hubs. Commuters can connect their devices and stream information or receive it via public screens.

With 50 billion devices connected to the internet by 2050, the design of our cities is being reshaped by our excitement about, and dependence on, technology. As our future cities offer us less personal space, but more communal space, the pressure is mounting for urban designers to provide usable, safe and digitally-connected public spaces, and to find extraordinary solutions, such as vertical trains, to solve the more intractable of our urban issues.

About the author: Natalie Apostalou is a freelance journalist and editor of 16 years’ experience. Mastheads that have published her work include Harpers Bazaar Australia and My Business magazine. 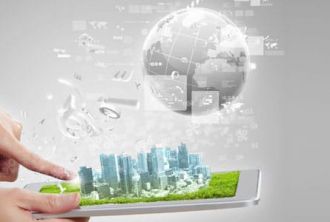