What architects can learn from designing with children

It makes perfect sense. If you need to design a new school or playground, who better to help than the children who are going to use it? Gradually, more architects and landscape designers are bringing young people into the design process. Now a new study has looked at what architects learn from children about how to break down their own creative barriers. As one architect put it, children can: “bring an energy, an imagination, an honesty, a moodiness sometimes which I quite like”.

The value of children’s participation in design has been acknowledged in research studies since the 1960s and 1970s. In 1977, the urban planner Kevin Lynch launched the groundbreaking UNESCO project Growing Up in Cities which was at the forefront of showing off children’s creative capacities.

But until now little research has focused on the impact of children’s ideas on the design process, or on the architects themselves. Our research project at the University of Sheffield’s school of architecture has looked at the way architects and children communicate with each other.

Now half-way through the research project, we have completed two case studies and surveyed 16 architects and landscape architects who have worked with children aged one to 18. They were commissioned to design anything from a playground installation and a children’s museum exhibition to a school science pavilion and a school library.

Design has often been associated with what’s called “possibility thinking”, which requires openness and the ability to think through possible scenarios. According to one architect who has worked extensively with children designing schools, these skills are close to what children do in their own creative moments. He said:

“I think all creative processes in some ways are a childlike kind of process that allows you to engage with something in a more immediate kind of way. So in some ways, I think everybody involved in design has to be in touch somehow with some of those kinds of facilities”.

The architects we interviewed overwhelmingly thought that children brought fresh perspectives and uninhibited curiosity, leading them to explore alternative scenarios. “We always try to make creative detours with the children and try to trigger their imagination and work – on purpose – outside their everyday life,” one explained.

Whereas adults were perceived by the architects to be limited in their thinking by the practical concerns of the every day – from time pressures to the liability culture within the construction industry – children were able to concentrate much more on experiencing and exploring space. This widened the scope of creative exchanges with the designers.

Children respond in the moment and are less likely to self-censor their ideas and responses. Architects said that children were spontaneous and honest about what has been successful and what hasn’t. This gave the architects the freedom to embrace unexpected scenarios.

As one architect put it: “you’re less concerned about saying the wrong thing or if other people have other agendas.” Dialogue with the children “is always unpredictable”, another architect commented, which arguably explains the emergence of new communication modes in their exchanges, such as improvisation.

The architects in our research watched as children bolted things together, glued bits of wood, plastered or brick layered. One of the architects said it “very much felt they were kind of co-designers in the process”. Another landscape architect thought that “children can handle virtually everything in a design process”, having experienced first-hand their creative inputs in designing a multi-functional outdoor space.

But it is not always a totally rosy process. Children can be disruptive and unpredictable to work with. An architect who worked with primary and reception stage pupils designing schools and playgrounds said:

“I am less comfortable in those environments where […] you’re going into the unknown really. But I know from experiences that having done that, time and time and time again, working with kids through community groups on their projects, that it’s a really valuable thing to do. I do think it has potentially changed how I engage with private clients”.

Such tensions, according to this architect, nurture the transformational potential for architects to introduce a renewed imaginative approach to their work and, ultimately, their professional identity. This potential is big. We will continue to explore it.

Thanks to Rosie Parnell, Jo Birch and Maša Šorn, who contributed to this article. 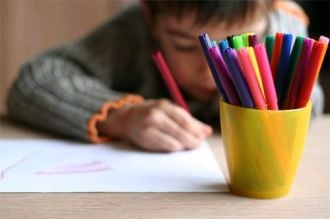