The appalling misjudgment in allowing commercial advertising on the ‘sails’ of the Sydney Opera House calls into question the special custodial role of our public buildings, major public artworks and iconic infrastructure as symbols of shared community and cultural values. The decision reflects poorly on those who made it, on the bullying provocateur who demanded it and, simply by association, on the nation as a whole.

And let’s be clear what happened here. It was commercial advertising on an iconic public building, pure and simple. The location was chosen because of the iconic reputation of the Opera House itself - certainly not because there was any reciprocal promotional value for the Opera House or NSW, as has been suggested by the Premier Gladys Berejiklian in defense of her decision. If promoting the Opera House was indeed the intention, it was tastelessly executed and poor-quality marketing that could have been achieved in any number of more powerful and legitimate promotional formats.

At best, these cheap antics have caused a collective ‘cultural cringe’ but at worst, they must have been viewed around the world with shock and anger, dismay and perhaps disbelief. Imagine, for a moment, the Statue of Liberty being requisitioned by presidential decree as an advertising billboard for say the NASCAR racing series. Now yes this has been done! But only in the safe and legitimate ‘virtual’ world of advertising; not literally by daubing the statue with digitally painted logos, as happened with the Opera House.

The lack of respect by all involved sets an unfortunate precedent that hopefully will not be used by others in future. But more importantly, it questions the very thinking and judgement of our leaders. Do they so misunderstand the powerful role of icons like the Opera House in symbolising a kind of collective cultural consciousness and a unified pride of being Australian, that they are happy to auction off our national heritage to the highest bidder? One hopes not, but this sorry tale is a timely reminder that the community must be ready to voice its anger strongly in the defense of those symbols of a shared Australia we hold so dear. 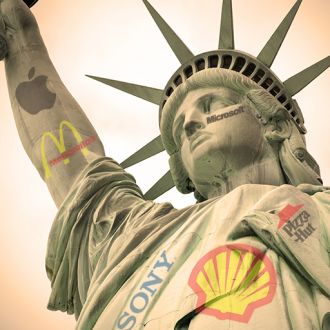