Finding a sense of place in a disconnected world

While business deals were once struck on the promise of a handshake, the introduction of email and project management technology has meant that even a phone call to a client or business associate is a rarity these days.

The irony is, that while nothing beats the connection of meeting face to face with partners, clients and collaborators, the technology that keeps us apart is also bringing us together – allowing modern businesses to pull on expertise from all corners of the world to better suit the needs of their clients.

So how do businesses looking to stay ahead in this technology-savvy, hyper-connected, yet physically disconnected world, still provide good old fashioned service?

Associate Designer at Hames Sharley, Jess Hames, says she sees technology as both a blessing and a curse in design.

“Technology enables us to carry out remote projects with relative ease and spread our expertise across state lines, but it also denies us the human connection we crave from a space and our clients,” Jess said.

Working from the concept phase of design projects right through to planning, Jess’ skills are diverse, which is why she often gets “called up” to work on everything from interior projects to education and retail.

So when the opportunity arose to work on a “quick” ten-week design job for Western Australia’s Edith Cowan University over the 2015-16 summer break, Jess was ready and raring to take on the challenge.

“The brief was to refurbish the largest lecture theatre and its lobby at Edith Cowan University’s Mount Lawley campus, in Perth, but I was actually based in Brisbane at the time,” Jess said.

“I went into it knowing that distance would be a challenge – but while the technical and logistical side of things ran smoothly, I found the lack of connectedness to place the trickiest aspect of the project.”

Taking the project on from concept to documentation, Jess said the client brief was already formulated when she started working on the job and was laid out so clearly that she had a thorough grasp of what was expected from the outset.

“From a functional perspective, the project was fairly easy to manage from the other side of the country,” she said. “I had a project team on the ground in Perth who assisted with liaison and logistics, and had regular phone contact with the client to keep communication open.”

The unexpected challenge for Jess was getting her head into what the spaces felt like, without being able to physically experience them.

“I had never been to the University myself, so was really reliant on the quality of documentation coming over from the team in Western Australia, who assisted me by taking panoramic photography of the theatre and lobby area we were designing,” she said.

“We also had really good drawings from the original architects which helped a lot.”

But Jess said it’s the things you pick up subconsciously when you’re physically present in a space – the sound and smells, the look and feel of the nearby buildings and natural areas – that give you an understanding of how it fits in the context of its surroundings.

“Because it was a cosmetic refurbishment, I needed to have a really thorough conceptual understanding of the space before I started to design it – not only to ensure it met practical needs such as hearing augmentation, wheelchair access, better sightlines and improved acoustics, but also to ensure that it fit within its environment,” she said.

“After receiving the first lot of imagery from the Perth team I had to ask them to go back and get more: the surrounding buildings, rooms, corridors and the natural environment around the University – all the things you don’t think about until you’re not there.”

The resulting design made good use of the second site visit, drawing inspiration from the subtle timber-lined concrete beneath the existing walls, and linking the space design to Edith Cowan University’s Joondalup campus – which sits on the site of an old pine plantation – by integrating the concept of a pine forest into the design.

“The lecture theatre and lobby sat within a really beautiful building that had a lot of expressed timber-lined concrete finishes, which had been clad over and covered up,” Jess said.

“The idea was to peel that layer off and reveal the existing beauty of the building underneath, while also introducing a lot more natural timber into the space as a nod to the nearby pine forest.

“The timber created an acoustic control for the walls and just made the space feel a lot more inviting and warm.

“If you’re spending a lot of time in a lecture theatre the last thing you want is to be surrounded by hard, man-made finishes and stark paint – so adding that natural element made it a nicer space for people to be in.”

The lobby area provided an opportunity for Jess to bring her pine forest concept to life.

“The lobby was just a corridor really, and not an inviting space at all – the idea was to make it into an area that people might actually want to inhabit, somewhere to sit with their friends, or plug in their laptops to do some study,” she said.

“We took the pine forest idea and created a series of timber pod structures which we suspended from the ceiling to reduce sound in the lobby, to create little alcoves with varying types of seating, including benches for working and bean bags for relaxing.” 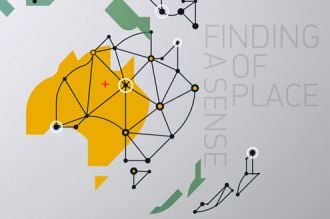