How a ‘happy index’ could increase a city’s joy

We’ve heard of smart cities, but what about happy cities? Bristol’s Happy City Initiative – one of the world’s most renowned wellbeing research centres – is attempting to measure the city’s happiness in order to increase it.

In an article The pursuit of happiness: could a ‘happy city index’ end Bristol’s blues? recently published in The Guardian, Ajit Niranjan explains that the Initiative’s founders believe examining happiness on a citywide scale will broaden the focus of local policy-makers beyond just economics.

However, as Niranjan writes researchers believe the combination of personal data with sweeping city statistics is needed to paint a full picture of wellbeing.

“Our research found that a person’s overall wellbeing is predicted almost equally by those ‘life in the city’ indicators as much as by what’s happening in their personal life,” Dr Wren-Lewis said.

This idea relates to Bristol more so than any other city in the UK.

“On the surface, the city is flourishing: its GDP per capita is the highest of all England’s “core cities” and its workforce is both well educated and well paid. Many cities view it as a model to aspire to,” Niranjan writes.

“A short bus ride from the city centre’s rainbow-coloured houses and trendy waterfront bars, though, a different, darker Bristol quickly emerges. A total of 16% of Bristolians live in the most deprived neighbourhoods in England. Child poverty ranges from just 5% in affluent wards to 50% in others.”

“What makes people around here happy is keeping busy,” local electrician Dean Turner told Niranjan. “They just need work. You don’t need charities spending all this money to tell you that.”

However, his son Darren believes there is more to happiness than just employment.

“Where I live now people smile at you in the street even when they don’t have much. I didn’t think a place like that existed in Bristol … If measuring happiness helps government get that, then maybe there’s hope for the city,” Darren said.

Despite the flaws and mixed public views, Niranjan writes the mayor of Bristol Marvin Rees, has suggested that the Happy City measurements be welcomed into the council’s decision-making processes. 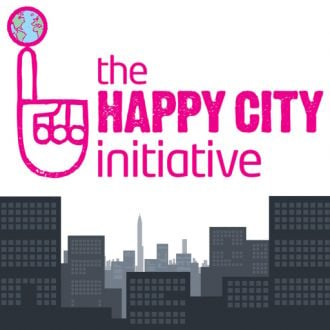