The silly season is well and truly upon us, with summer festivals and major events ready to invigorate just about every Australian city and town over the coming months.

From Lorne’s Falls to Hobart’s Taste and Adelaide’s Fringe, cultural events transform our cities over the summer months as Australians come out of their winter hibernation to make the most of long sun-drenched days.

But how do these annual events and festivals impact our towns and cities? What do they bring to our urban spaces and communities? And what can councils and urban planners do to ensure city spaces are adaptable enough to meet the needs of large-scale annual or one-off events and the people and pockets they bring?

Carolyn Morris, Regional Director of International Festival and Events Association (IFEA), based in Georgia, USA, says that annual cultural events strengthen cities, put them on the map, and create a sense of community pride.

“Festivals and events are a key component of developing a sense of community and pride, generating economic growth, accentuating natural and manmade assets, and giving the city its identity, both regionally and nationally,” she writes.

“When residents gather in a comfortable environment, relationships form and strengthen, providing a platform for local governments to display their value and services.

“When staffed with community volunteers and/or governmental staff, such events provide the basis for bringing people together toward a common goal. Working together like this can only strengthen the community and, like it or not, most communities must continue to grow to exist.”

On a larger scale, a paper from The Organisation for Economic Co-operation and Development outlines the myriad of benefits that come with hosting or staging a global event such as a World Cup or Olympic Games.

“Whilst many benefits and impacts can be felt in the physical and economic realms, there will also be substantial scope for environmental, social and cultural benefits if plans are developed well,” the paper states.

The paper also states that while major events provide countries and cities with an opportunity to define themselves, there are also challenges that come with being under the spotlight, which is worth considering.

“Major events offer exceptional opportunities to define the identity, values, unique assets, and long-term contribution of a nation to the global realm,” the paper states.

“Because such events bring a “global audience” to a nation or city for a period of time, there is a unique opportunity to brand and communicate.

“However, the presence (both real and virtual) of such an audience, and of the world’s media, will also uncover and highlight weaknesses or contradictions in the identity of the hosting national/locality. You have to be ready for the global spotlight and use it well.”

Director of Urban Development at Hames Sharley, Chris Maher, says that no matter the size or scope of the event, it’s important for governments to see events as an opportunity to reassess, reinvigorate or repurpose their urban spaces.

“Cities are now realizing that it is not only daytime events that require this level of attention. Over time, evening events aimed at invigorating the nightlife of cities can add millions to a city’s economy. Paris and Amsterdam have recently appointed Night Mayors to help coordinate and integrate new nighttime events and reinvigorate their urban centres.”

“Another great, recent example of urban planning having a real impact on a major community event is Perth’s Journey of the Giants held in 2015. That event saw 1.4 million West Australians descend upon the CBD to witness the spectacle of two huge robotic puppets traversing the city streets on a journey that ended aboard barges travelling west up the Swan River. The logistics of planning similar future events throughout Australia can only benefit from carefully considered urban planning and a recognition of the importance that such events have on local communities and the economy,” he said.

“How will a city work to adapt its urban spaces and infrastructure to these one-off reoccurring or annual events, and what will these spaces be used for in the interim or after the event is over?”

Author of, A lasting legacy – How major sporting events can drive positive change for host communities and economies, Greg Pellegrino, agrees that a major event whether it be an entertainment festival or a sporting event can provide cities with an opportunity for change.

“These kinds of events can be a significant catalyst for change, elevating the host’s global stature and turbocharging its economic, political, and social development,” he writes.

“Hosting a major event gives a city or country permission to move quickly and decisively on a wide range of issues and activities that would normally be mired in endless debates and bureaucracy.

“It provides a common focal point for people to rally around. It provides a rigid deadline that accelerates infrastructure development and other large-scale improvement activities that might otherwise take decades to complete. And with the whole world watching, it provides a strong incentive to do things right.”

For cities that have already managed to snap up a major sporting or entertainment event, Chris Maher says it’s also important for governments and councils to think broadly about how to leverage tourism opportunities before, during and after high-profile events.

He says that smaller cities – such as Hobart, with its post-Sydney to Hobart ‘finish line’ festival, can often do this very well.

“In a way the smaller the city the better it is at adapting to and embracing an event or festival,” he says.

“Hobart repurposes its waterfront from a finish line to a food-lover’s paradise flawlessly with its Taste of Tasmania event launching just two days after the race.

“The entire city embraces the race by not only accommodating it but celebrating it, and strategically using the spotlight to showcase everything the city and state have to offer. These events become a traditional part of the social fabric of the city.

“No matter which way you look at it, major events and summer festivals provide an opportunity to revitalise cities – from a community, planning, infrastructure, and economic perspective, events put cities back on the map.” 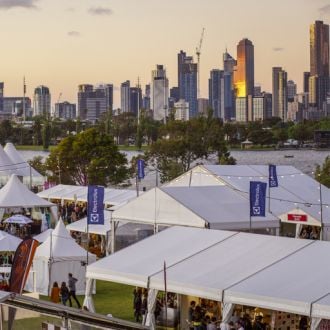