How to design apartments that sell faster

As architects, the idea of a shiny new project is always exciting. But too often our thinking-versus-drawing ratio can be out of whack. It’s so tempting to dive in on day one to get started on drawing and simply react – to the site, the brief, the budget – working only from our past experience.

But we have found over the decades that the best response – the one that yields the most original designs – is measured and carefully considered.

This means spending time analysing the brief, thinking, researching and speaking to all involved parties. It means not lazily relying on what has worked in the past. It’s about generating an understanding of the rules first and then rigorously challenging them to break the standard design curve.

It’s not just about the design or the architecture – although that’s intrinsic, and we need to be exemplary at it. Where we as architects can create a point of difference is how we go about solving the problems.

Take, for example, our work on the Ergo apartments in Adelaide.

One of the biggest issues for developers of residential apartments is gaining the off-the-plan presales to trigger the finance to commit to building.

Part of our research is to really understand the developer’s viewpoint. We researched the whole issue of pre-sales and the target market, and then we talked to all stakeholders involved.

To encourage presales, our design team designed several different floor plans, with only four or five of each type within the development. We created scarcity rather than monotony.

That simple step – designing various options in limited numbers – resulted in faster presales and it meant a higher number of people bought into Ergo as occupiers rather than investors.

Why? Imagine you’re a couple who went to look at the plan to consider a purchase. Rather than there being 80 or 90 apartment, your options have been narrowed down to just four or five contenders that you absolutely love. You worry that unless you put down a deposit, you’ll miss out, so you’re inclined to act fast.

Also, when owners come to sell, their apartment will not be one of 80 identical apartments, of which six might be for sale at the same time. This kind of situation inevitably forces down sale prices and then brings everybody’s values down (in the block and surrounds). By designing scarcity of product into the apartment, we reduce this phenomenon, helping to create a greater propensity to invest in medium- to high-density housing.

That’s a simple example of a design approach that understands the economic environment.

The architect’s role is to look forward, and back, and to attempt to articulate what the future might be and then translate it into built form.

Too often, a project’s scope or briefing document is limited by a client’s past experience; what was selling like hotcakes last year, for example. But even in the space of three years a community’s desires and expectations can change dramatically.

In fact, no two project environments are alike.

Gone are the days of architects acting autonomously. It’s about having a place at the table with the developer, understanding the finance, the leasing or sales mechanism, the investors and the patrons. These are not impediments, but useful tools to work with to create the greatest value to the outcome.

It’s impossible to solve a problem unless you understand all of its complexity. The architect must understand what these are, and all the key performance indicators required from the parties involved. You can’t break rules properly until you understand them.

There’s a cost factor – obviously putting more time into projects costs more – but architects are adding a lot of value when we offer a service that is beyond the ‘standard operating procedure’ of a quantum far exceeding the small additional investment of time and thought.

As long as architects deliver on the promise of research and added value, we can be comfortable in charging for the extra time it takes to get everything right.

Architects need to combine our idealistic education with the acceptance that commerciality isn’t bad.

It is only an issue if it is at the expense of a quality built environment. Money cannot erode the quality or essence of what we do if we make a considered, thoughtful, well-researched response to the concerns of everyone involved.

Caillin is the Managing Director of Hames Sharley. He has a high level of understanding in urban design, architecture and interior design particularly in the commercial, retail, residential and institutional sectors. Caillin has established himself as a versatile designer and manager with experience in a wide range of projects of varying sizes, complexity and focus. He brings to any project his excellent management, interpersonal and communication skills and his ability to adapt and analyse briefs and conditions to successfully deliver a task on time, on budget and over expectations. 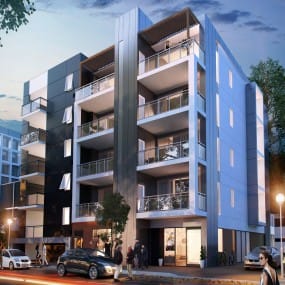