There might be a simple solution to the scorching temperatures city folk suffer compared to their country cousins.

Using lighter coloured bitumen (instead of the black stuff) could reduce city temperatures by as much as seven percent. And, because lighter-coloured surfaces do not generally absorb as much light, or retain as much heat as dark surfaces—it may mean we all save on our electricity bills by reducing the need to artificially cool homes, according to sustainability expert, Michael Mobbs.

The City of Sydney has decided to trial Mobbs’ idea by creating a lighter-coloured pavement in Myrtle Street, between Abercrombie and Smithers streets in Chippendale. The trial will investigate whether there is a significant impact on “local energy bills, public health, and on surrounding biodiversity”. 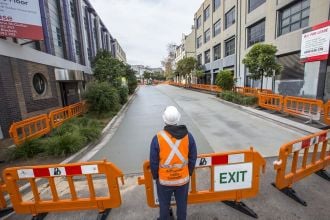