The art of bellringing

Perth’s downtown core, although a short distance from the Swan River, was once isolated, both physically and mentally, from this natural beauty. For years the City of Perth has planned and worked to bridge the gap between its centre of commerce and the potential centre of community found at the waterfront.

This important project began more than a decade ago with the construction of the iconic Bell Tower at the heart of the Barrack Square Redevelopment. Sometimes referred to as Swan Bells, this tower houses the historic St Martin in the Fields bells, but also serves as a modern WA landmark and a symbol for Perth, drawing crowds to learn, relax, and socialise on the banks of the Swan River.

Bells have rung out from the Church of St Martin in the Fields in Trafalgar Square for more than seven centuries. First used by the monks of Westminster, this historic church has undergone many changes to become a prominent London landmark, including a major rebuild in 1720-1726. At this time, a new set of twelve change ringing bells was installed within the church and the story of the Swan Bells bell tower began. For more than 250 years, this set of bells played a special role in London’s history, ringing for significant events like royal coronations, New Year’s celebrations, and (also significant for Australia) Captain James Cook’s return to London in 1771.

By 1988, the weight of the massive bells had become too much for the aging tower, damaging the structure as they swung. Instead of melting them down and having them recast, as is typical practice with bells of such significance, the bells were presented to the people of Perth as a gift from the Cities of London and Westminster to celebrate the bicentenary of British settlement in Australia.

Shortly after, five additional bells were cast for the set and the City began plans to build a new home for these venerable bells. Unfortunately, at this time, the story takes a long pause as political and public debate regarding the site, budget, and building design continually hamper progress. Finally, more than a decade later and after considerable public consultation, the first stage of the Barrack Square Redevelopment was approved as Western Australia’s Millennium Project and a final Millennium bell was cast to round out the set of eighteen. The Redevelopment plans include new jetties and pavilions with shops, cafés, restaurants and event spaces, mooring facilities and ferry terminals, considerable landscaping and water features, community art projects, and the construction of the carefully designed Bell Tower to house the newly named Swan Bells.

Architectural firm Hames Sharley developed a truly unique design for what is often referred to as the world’s largest musical instrument. Through a process combining original design, community input, and careful redesign, Hames Sharley came up with a final plan for the tower that seamlessly mixes modernity with history, celebrating Perth’s lasting connection to the Swan River.

The tower itself is 82.5 metres tall, impressive, yet not domineering in the face of the CBD backdrop. It consists of a futuristic tinted glass spire, ringed with gleaming steel extensions and a rigid concrete structure. Inside, a spiral staircase or lift takes visitors upward, past the bells, to an observation deck offering views of the city skyline and the majestic Swan River. From here, the glass spire continues upward, revealing modern steel lattice-work within, and reflecting a spectrum of natural light without. State of the art engineering techniques allowed the spire to be constructed in parts off-site and hoisted by crane and pieced together on site. This was accomplished by using bolts in the joints of the spire as opposed to welding.

A set of four weathered copper-clad sails envelop the tower’s main concrete structure. The copper sails were chosen to portray the significance of both the city’s maritime history and its strong connection to the mining industry. The bell chamber lies behind the sails in a concrete housing, rigid enough to minimise the vibrations and powerful lateral forces created by the ringing bells. Keeping with tradition, the Swan Bells hang in the new Millennium tower at the same height that they once hung in the Church of St. Martin in the Fields, 16.5 metres. Breaking from tradition, the architectural team designed soundproof viewing galleries to allow visitors to see the bells and watch as bellringers perform their art, a first of its kind innovation.

To complement this imaginative architectural landmark and expand the community atmosphere of Barrack Square, landscaping, water features, and art projects were installed around and leading up to the Bell Tower. A welcoming invitation to the southern entrance of the tower is presented by a reflecting pond framed on either side by timber boardwalks. The boardwalks are inlaid with ten original 3.2m x 2m mosaic tile art pieces, contributed by local artists as part of the ‘State Images’ competition and representing ten regions of Western Australia.

Local students were also given an opportunity to take part in the landmark’s construction through ‘Sign in 2000.’ Students from across the territory provided their signatures to be printed onto ceramic tiles which were permanently displayed around the site. In acknowledgement of their efforts, the construction, engineering, and architectural teams’ signatures were also incorporated into the project.

The newly revitalised Barrack Square with its striking centrepiece, The Bell Tower, was officially opened to the public on December 10, 2000. Thousands of Perth’s citizens attended the historic occasion to view their new icon and hear the Swan Bells ring in celebration for all of Western Australia.

Since then, the Swan Bells have been rung to celebrate, commemorate, and observe important events, for Australia and for the world. These events include the momentous New Millennium and every New Year since, Australia Day, ANZAC day, and a performance of Tchaikovsky’s 1812 Overture during the WASO Symphony in the City concert. They are also used for more solemn occasions such as remembrance for the 2009 Victorian bushfires and the victims of September 11, 2001, and to raise awareness for victims of domestic violence, individuals killed in work-place accidents, and childhood cancer. The Swan Bells have thus been recognised as the most frequently rung set of bells in the world and, despite controversy, The Bell Tower has earned its place as a part of Western Australia’s history.

More than one million people have now toured The Bell Tower as it attracts regional and international tourists, music, history, and architecture fans, and citizens of Perth escaping the bustling CBD alike. The Barrack Square Revitalisation and its Bell Tower have become a jumping off point for a complete Waterfront Redevelopment. As a result, the business district of Perth has been extended to a place of community and interest on the shore of the Swan River. 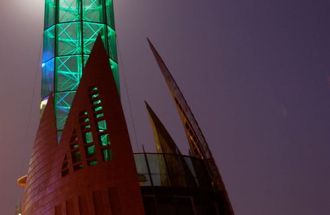