A study for the Perth and Peel regions

Perth is in the midst of an unprecedented transformation. In the face of dramatic population growth and demographic change, it is critical to examine whether current and planned housing stock meets the needs of Perth’s present and future residents.

The Housing We’d Choose: a Study for Perth and Peel was inspired by the Grattan Institute’s study The Housing We’d Choose, which was conducted in Melbourne and Sydney during 2011 and found a mismatch between the stock residents said they would choose and what was planned or available to them. This study sought to understand whether a similar mismatch existed in Perth and gain a further understanding of trade off behaviour.

Accordingly, The Housing We’d Choose: a Study for Perth and Peel report represents the culmination of an intensive period of qualitative and quantitative research, investigating the relationship and gaps between the current housing stock in Perth, what is currently being built and what is driving the housing choices that consumers make. One of the key objectives of this research, the first of its kind in Western Australia, was to provide a better understanding of demand and supply drivers together with the main influences on people’s choice of housing type and location in order to guide the preparation of future government strategies.

The value of this study is embedded in the interrogation of the decision making process as to how people tradeoff house type, location and attributes. This provides government and industry with the behavioural patterns to inform policy and investment.

Perth’s current housing stock is largely characterised by detached homes in the suburbs, many of which have four or more bedrooms. While this meets the needs of many, it is problematic for others who need something small and affordable in which to form a new household, or who may want to downsize to a smaller dwelling in the location they have come to know over many years. In addition, it is becoming less socially, economically or environmentally viable to continue Perth’s traditional pattern of development that focuses on providing large, detached dwellings on the urban fringe.

Both Directions 2031 and Beyond and the State Affordable Housing Strategy 2010 to 2020; Opening Doors to Affordable Housing recognise the importance of improving the density and diversity of our housing stock. This study was commissioned by the Departments of Planning and Housing to test the appetite of the residents of Perth and Peel for these concepts and to understand the factors that influence the types of housing they choose.

The study was conducted in four stages:

The research was based in part on the methodology used by the Grattan Institute with some modifications to take into account the findings from the focus groups and the Western Australian context.

Five focus group sessions were held in Perth, plus another in Peel, attracting a total of 62 participants across a full cross section of age, income and household types. The focus groups considered a range of 18 dwelling types in order to develop a series of unconstrained housing preferences.

What Matters Most? On-line survey

Based on some of the information gained during the focus group sessions, the first on-line survey attracted 866 respondents, who were asked to identify the housing attributes they valued the most when not constrained by income. 76 attributes provided as part of the on-line survey, and participants were asked to select the most important, and then rank their top 4.

The second on-line survey attracted 1,071 respondents who were asked to indicate their housing preferences when constrained by income. This on-line survey considered 16 house types, notionally available across 9 regions. All respondents were presented with a range of house types affordable to them and based on this, were asked to rank their top 4.

Key Issues and Ideas Addressed in the Project

The findings of The Housing We’d Choose: a Study for Perth and Peel highlight a number of issues for government and industry as they seek to provide a housing profile that better matches sustainable urban development and policy objectives as well as Perth residents housing choices.

Safety was one of the most important factors people identified when choosing where they preferred to live and the type of home they wanted. Both industry and government need to ensure that neighbourhoods and individual homes are designed in a way that provides both real and perceived security to residents, although community safety is a much bigger issue than housing design.

The relatively low appetite for four and five bedroom dwellings suggests a shift in emphasis towards small and medium sized dwellings is needed. This will not only cater for existing demand, but also the changes in household types that are forecast for the future. Lone person households are expected to form an increasing proportion of Perth’s population.

While the need for storage space and amenity may maintain their appetite for medium sized dwellings, they are less likely to want four and five bedroom homes.

Many people chose semi-detached housing as a trade-off from separate housing in order to meet affordability and location constraints. The willingness to accept this form of housing over apartments may in part reflect Perth people’s perceptions about apartment living and their lack of experience with this kind of dwelling when compared to semi-detached housing. Industry has both a challenge and an opportunity to address these perceptions by designing and building apartments that provide a high-quality living environment.

The study also revealed a desire for greater diversity of housing within both existing and new neighbourhoods, which translates into an opportunity to develop a mix of varied and affordable housing in all suburbs in the future.

People’s reluctance to accept apartments and the high cost of construction in Perth can make them difficult to deliver, and less appealing to the market particularly in areas with limited amenity. As congestion increases in Perth and Peel, and the resultant travel time and costs escalate, some people may seek to move closer to their place of work. In so doing, they may be more prepared to ‘trade-off’ their preferred housing type for a smaller dwelling in a more amenable location.

At face value, apartments in the right location present an opportunity to improve both diversity and affordability. These findings aligns with WAPC Statement of Planning Policy SPP 4.2 - Activity Centres for Perth and Peel which aims to increase housing in and around appropriate centres as well as create a greater diversity of entertainment, social and transactional uses in centres.

Respondents expressed a strong preference to live in a separate house, however, many also indicated that they will trade-off to denser forms of housing in the right set of circumstances.

Price is considered one of the most important drivers of these decisions. State and local government and the housing industry need to encourage opportunities for supplying a greater diversity of housing types, such as through partnerships, use of incentives, and the application of higher densities in locations with good amenity and access to quality public transport.

Delivery of housing with sustainable features such as solar panels and water tanks was identified as important to study participants, however, most were not prepared to shoulder the upfront costs. Smarter packaging and pricing of sustainable features will be key to increasing demand for all sustainable homes. People have a clear desire for climate responsiveness and reducing household running costs. The challenge is delivering these at a cost that people are willing and able to pay, up front.

The findings of the study confirm that many Perth residents are prepared to choose the compact housing types (particularly semidetached homes) required to meet the 47% infill target identified by Directions 2031. The challenge will be to create planning frameworks that respond to and deliver the types of housing that meet this demand, while meeting infill housing targets.

The findings indicate a lack of affordable housing options for both purchasers and renters with a number of respondents unable to afford any of the housing options available to either buy or rent.

The results also suggest that a significant proportion of future housing demand will come from renters seeking to switch tenure, indicating a strong demand for affordable purchase alternatives.

Among the intended outcomes of the Strategy is increased density and diversity of housing, more use of affordable construction techniques and better alignment of housing stock to the number of occupants. This research provides greater certainty about the appetite for these concepts and will help to inform industry as well as local and state governments in the delivery of their housing strategies.

Taxation was identified as a major impediment to downsizing because it penalises the transaction of land. There are few incentives for older people to change the house in which they live to one more suited to their household composition. A different tax structure or incentives may assist to encourage downsizing.

Identification of this issue will hopefully inform the next round of taxation reform and improve opportunities to better utilise our existing housing stock.

Key Contribution the Project Makes to Planning Practice and Learning

This research project was conducted by Hames Sharley and Curtin Business School with support from the Western Australian offices of the Housing Industry Association, Planning Institute of Australia and the Property Council of Australia.

Undertaking Perth and Peel specific research into the types of dwellings people want to live in and where they want to live provides unique insight into household decision making factors. Prioritising these factors into those that are foremost in households minds and those that are ‘nice to haves’ arms housing and planning policy makers and housing industry providers with What Matters Most and what Trade-Offs people are prepared to make to live in their desired location and dwelling type.

The research began with participants being able to express desires unfettered by budget and in its later stages probed decision making under real world financial constraints. This approach allows an understanding as to whether priorities change when affordability is taken into account. Central to the analysis was the comparison with the stock Perth currently has and the types of dwellings residents say they would choose.

The Housing We’d Choose: a Study for Perth and Peel is an important unprecedented benchmark and source of information which has allowed myths to be dispelled, around factors such as the number of bedrooms that households demand. Other long held views such as the desire for the separate house being part of the Western Australian dream was able to be confirmed.

The pressures and challenges that brought the study into being, such as population growth, demographic shifts, congestion and travel times and the value placed on amenities are evidenced in the results which show a preparedness to trade off to a smaller semidetached dwelling if it allows the household to access their preferred location.

The Housing We’d Choose: a Study for Perth and Peel marks the beginning of an important conversation about Perth’s future. Both government and the development industry now have a much better understanding of the real life choices that Perth residents are prepared to make when deciding the location, size and type of house that they want to live in. The collective challenge is to deliver housing that responds to these choices.

All levels of government and developers will need to find opportunities to remove the barriers, reduce the costs and increase the efficiency of delivery of the diversity and density of housing, particularly closer to the Perth CBD. 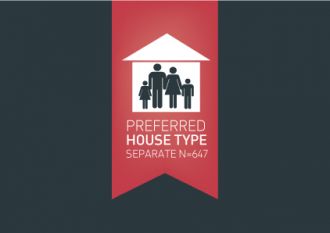