The Social Life of Mining Towns

On 25 August 2013, Michelle Cramer, Director of Hames Sharley, presented “Where is Home? The Social Life of Mining Towns” at the Victorian Planning and Environmental Law Association’s annual conference. The headline of the conference was “From Here to There. Business as Unusual.”

The presentation considered the way that the mining industry in Australia is changing the social life of the nation both within and outside traditional mining areas. Rather than an economic activity that is occurring ‘elsewhere,’ the mining industry is having an impact on our cities and regional centres, not just through the economy, but on the way in which we live. This presentation outlined how the mining industry is driving infrastructure and population changes across the country, new modes of employment and services, and the role of normalisation in evolving mining projects to mining places. In 2013, Australia’s mining industry is very much business as unusual.

The Heat of Industry

The scale of the mining industry in Australia is clearly evident in a satellite heat map of Australia. It is both a mapping of our urban centres, showing clearly Sydney, Melbourne, Brisbane, Perth and Adelaide. More intriguing is the heat generated in areas typically identified as remote Australia. This is the heat of industry: the Pilbara, Surat Oil and Gas Basin, Coober Peedy, Kalgoorlie. The heat map shows the economic and social performance of our urban centres literally overlayed on a foundation of hard rock mining, oil and gas.

Hard rock mining generally refers to on shore mining. Oil and gas mining are more generally off shore. Both create an employment structure, and therefore a family lifestyle, that is significantly different to the traditional white and even blue collar workers of Australia. In terms of employment, the term FIFO has become ubiquitous with the Australian mining industry. Desperate for and short of available and appropriate workers in remote regions, mining companies have enabled the fly-in, fly-out method of employment, and its more recent cousins drive-in, drive-out, and bus-in, bus-out. FIFO is shift work on steroids, where programmes such as 10 days on 10 days off, or three weeks on to one week off are the norm. It has traditionally relied on flight, either commercial or private company aircraft delivering the workers to their place of employment, and into their temporary ‘donger’ accommodation. While this method still exists, new models of work-life employment are evolving in the Australian mining industry and which are having a significant impact on the way we live in major urban centres and regional cities.

If the mining camp is the postcard of mining in Australia, then the mining town is rapidly the social heart of the industry, and the major centre, such as Perth, the headquarters. Understanding the way in which these three tiers of place work together is key to the matrix of the mining industry’s influence on urban Australia.

In the first instance, mining camps are evolving from temporary dongers to state-of-the-art facilities driven and enabled by technology. Roy Hill by Brookfield Multiplex provides an exemplar for delivering a mining camp appropriate to the 21st century. In the past, Brookfield Multiplex has relied on other parties to provide their housing. But with changed expectations around what is acceptable in camp life, the company is investing in its own people. They are building a company camp. In terms of FIFO, this is the ‘In.’

Outside of the individual camps are the regional centres that have traditionally provided the local towns for these camps. There are 25 plus centres identified by the online community “Mining for Families” as possible mining town destinations for families. The website profiles each centre in terms of their assets and opportunities, by describing what it is like to live in the town with respect to child care, education, job opportunities for non-mining workers, retail, places to eat and recreation. In the past, these towns were limited to places like Karratha. Born in the 1960s, the original mining towns of the Pilbara were designed and built by engineers, for engineers. At that time, it was never conceived that these towns might be anything other than a remote centre supporting camps. In some places that legacy endures today.

However, emerging in the 21st century is a new-style mining town. Busselton, in Western Australia’s south-west, is a lifestyle town quickly becoming the home of choice for Western Australian mining families because the lifestyle it affords is better than that in, say, Karratha, but with an expanding airport is equally as accessible to the sites of industry. Currently under construction is Exmouth. The plan involves 120 to 150 workers housed in six accommodation properties commuting daily by plane to Paraburdoo, leaving at 5.30am every morning and returning at 6.30pm each night in order to spend more time with their families. The benefit of these towns is that they can be both the ‘In’ and the ‘Out’ of FIFO; ‘In’ in that they provide mining employment associated with mining companies, and ‘Out’ in that they can be a place to live a plane’s ride or car drive away from a working mine.

The ‘Out’ in FIFO is best understood by mapping private and commercial flight maps in Australia. This private flight map shows permanent chartered routes of one airline and it highlights major centres as origin points around the country. In this diagram it is clear that major capital cities and secondary cities like Townsville play a significant role in providing workers to mining environments.

The map also suggests that major capital cities provide headquarters for mining companies. Melbourne, for example, provides the HQ for Esso, Rio Tinto (management office) and BHP Billiton. However, this is a temporal arrangement tied to the competitive nature of cities. In a situation where 24 hour a day mining is the norm and robotics have transformed the need for humans to undertake certain jobs, the headquarters can be anywhere. For example, the Rio Tinto ore trains, the longest of their kind in the world, are driverless and are operated from a computerised operations centre at Perth Airport. They happen to be in close proximity to the Rio Tinto private planes that transport workers to mines, but could equally be operated from anywhere in the world, including the UK where the multinational’s HQ is located. For a city like Melbourne, this means the need to remain competitive and attractive to mining companies.

The competitive advantage of place can be considered in terms of statistics. The Australian Bureau of Statistics (ABS) has been mapping the mining industry since its modern incarnation in the 1960s. This research identifies that the number of people who say their occupation is directly related to the mining industry and reside in a major centre has significantly increased in Perth and Brisbane from 2006 to 2011. However, all other major centres have witnessed a decline. This decline has occurred even though the ABS also advises that worker numbers over the same period have significantly increased. This either means that a majority of mining employees are choosing to hub from Perth or Brisbane or, as this data from the ABS suggests, they are choosing to hub from regional centres.

In the last census of 2011, the ABS classified 10 regional centres as booming, which means a significant population increase above the national average of around 2%. Some towns experienced a population increase of closer to 8%. This also means new design challenges for these towns, how to respond, for example, to housing needs, education challenges and medical services.

As people and assets continue to invest in regional Australia, it is also important to consider Australia’s significant military bases and their proximity to mining assets. The current location of military bases, and the Defence White Paper, suggests we are significantly exposed in the north-west. This suggests the opportunity to further reinforce, in terms of population and services, the mining region of Western Australia’s north-west with housing, employment and facilities that comes with troops on the ground, such as that at Lavarack in Townsville or Larrakia in Darwin. This further supports the growth of the mining town.

The Concept of Normalisation

To evolve the ‘engineered town for engineers’ concept and to combat anti-social behaviours associated often recorded in the press, many regional mining towns and regions are transitioning through what is referred to as the concept of normalisation. In simple terms, this asks how can we evolve traditional mining projects to mining places. These initiatives are being undertaken by both the public and private sector in support of better urban environments for the workers and families of the mining industry.

The Pilbara Cities vision is a regional government response to build the population of Karratha and Port Hedland into cities of 50,000 people, and Newman to 15,000 people by 2035, with other Pilbara towns growing into more attractive, sustainable local communities. Pilbara Cities has committed more than $1 billion in Royalties for Regions funds with relevant local and state government agencies across the key focus areas of infrastructure coordination, land availability and development, community projects and engagement and economic diversification.

The House of Representatives Standing Committee for Regional Australia has identified the following areas for action in mining areas: improving the supply of affordable housing and access to health services; encouraging the provision of tertiary education, training and mining industry jobs for residents of mining towns; and, initiating community volunteer days, social contracts, and mandatory ‘bus-in, bus-out’ policies to increase civic pride in mining towns.

LandCorp, the public-based housing provider for Western Australia has identified a Pilbara vernacular that supports built form outcomes that are responsive to place. These include values that: respond to climate; incorporate the natural landscape; build on the Pilbara character and identity; enhance liveability; and, mobilise for change.

The mining companies themselves have a number of online communities that support family life in mining environments. FIFO Families, started by two mining wives, is now one of the most significant online communities for bringing mining families together, encouraging women in the mining industry, and supporting business initiatives. Mining Family Matters, also an online community, focuses on supporting family life by providing information on mining towns, how to manage daily functions, such as online shopping, and profiling families who are making the mining industry their home. 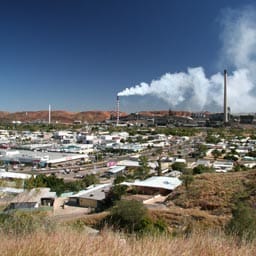