The Swan Bells is the world’s largest musical instrument. 12 of the bells originated in the Church of St Martin-in-the-Fields, Trafalgar Square, and together with six newly cast bells, form the ring of 18. Designed by architects Hames Sharley, the Bell Tower is the home of the Swan Bells and rises 82.5 metres high, the height essential to ensure the tower is not lost in the city backdrop.

The design consists of the main concrete structure, forming the enclosure for belfry, ringing room, sound chamber and public viewing areas. Transparency is achieved by a full height glass curtain wall on the riverside and the glass spire to the North side, facing the city. This spire houses a lift shaft and spiral stair, serving all six levels up to the Viewing Deck, and then soars upward in a narrowing, lattice steel and glass-clad structure, topped by a futuristic, finned upper spire. The copper clad external sails evoke strong links to the Swan River, with the weathered copper sheeting referring to the state’s mining history.

As an instrument of commemoration and celebration of the new millennium, the Bell Tower reflects an acknowledgement of the past and confidence and hope for the future.

One of the fundamental design processes for the concept of the Bell Tower was the public consultation conducted by the government’s media consultant. The mechanism for public comment was arranged through focus groups and exhibition tours of the concept drawings around the state and metropolitan areas.

Hames Sharley recorded the public comments and collated the responses to discover the majority of the public preferred a historical context for the design of the Bell Tower. Hames Sharley subsequently investigated the historical context of Barrack Square and found that boat building was a prominent activity which eventually led to the Bell Tower’s design being evocative of boats and sailing.

Another idea was to design a Bell Tower that was secular. Although the bells originated from the church of St Martin-in-the-Fields, London, they were gifted to the people of Western Australia in 1988 to commemorate the Australian Bicentennial and were regarded in a more profane light.

These ideas and the architects’ vision of a contemporary iconic structure that celebrates the millennium led to a design review of a series of options and the eventual decision to separate the functions of the Bell Tower: The Bells - historic and solid; The Tower - modern, lightweight, technologically advanced and iconic.

The main reason for this separation was due to the total girth of 18 bells - this would have been economically prohibitive to design a slender tower. The development of the decision to form two parts enabled the Bells to be housed in the “sail” clad chamber at the historical height of 16.5 metres as when they were in the church of St Martin-in-the-Fields, and the tower to be of sufficient height to make an iconic statement.

As there are no historical precedents for secular bell towers, the architects chose to project the idea of the Millennium Tower as the technology of the future that has an overlay of meaning that referred to the history of the bells, the site and that of our state. The tower was to reflect technology and aspiration for the next millennium and the bell chamber was developed as a musical instrument with the historical association of copper cladding. The design concept was also deliberate in an attempt to demonstrate the state-of-the-art design, engineering and construction at this time and be representative of Western Australia’s skills in these fields. 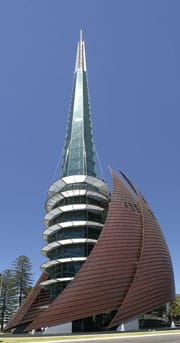 Whilst representing the future, the design necessarily had to honour the past, not only recognising the age of the bells but also reflecting on the historic sense of the place itself. The intention was to have the modern and the old juxtaposed against one another, crystalline against solid, fragile against robust, a structure with dynamic references.

Designed around the fundamental principle of juxtaposition, the old bells are housed in a very rigid concrete frame and are covered with a layer of the copper clad “sails” reminiscent of the heritage of the place as a centre for boat building and sailing. The use of copper is also an attempt to employ an ancient building material fixed to the structure using age-old roofing details, and the copper sails are reflective of the maritime history of the area and the importance of mining to the state. On the other hand, the crystalline materials of glass and steel housed in the new millennium tower and associated lobbies are intended to reflect the state of building technology available at the turn of the century. 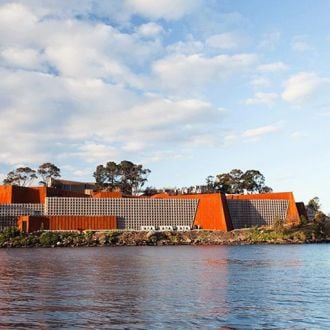 The MONA effect – how an iconic building can transform a city 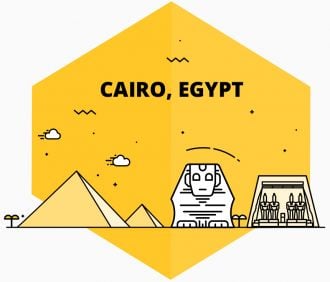 The most iconic architectural cities in the world