When he moved from his small practice in the seaside town of Richards Bay, on South Africa’s East Coast, to Perth in 2007, the last thing on Desmond Robertson’s mind was car parks.

Arriving just in time to make the most of the infrastructure boom, Des knew he’d hit the big time when he came to work for Hames Sharley – then he was given his first project.

“I think everyone thought I should start on a simple job, just so I could get to know the Australian way of doing things, so they gave me a car park,” he laughed.

What Des soon learnt when documenting and administrating the Elder Street Carpark in Perth’s CBD is that there’s no such thing as “just a car park”, in fact, building a car park with form and function can be just as much, if not more, of a challenge as building a multistory office.

“There are a huge amount of technicalities that come along with a car park project – it’s a lot more complex than people think, and to be honest, I really enjoyed the challenge.”

After his meticulous work on the Elder Street project, Des was asked to project manage the construction of two more car parks, as part of Hames Sharley’s involvement in the design and construction of Perth’s award-winning Fiona Stanley Hospital.

“That’s when I became known as the car park guy,” Des said.

“I went on to project manage a six-level car park for the Perth Crown Casino, which had 1,500 bays, then they put me in charge of the Joondalup city car park, a five-level multistory, with 550 bays.

And while Des admits that raw concrete, paint and lift lobbies might not sound exciting, he’s decidedly passionate about his subject.

“When something is as raw as a concrete building, everything is exposed, you don’t have the luxury of hiding or correcting errors with plasterboard walls, putting in ceilings or adjusting light locations – you only get one shot at getting it right on a car park,” he said.

“You’re working with materials that are not breakable or bendable, so once they’re in, that’s it – there’s nowhere to hide bad craftsmanship.

“Other than splashing on some paint or using light to create interesting effects, the only real design flair that can be used is when it comes to the entrances and lift lobbies.”

And as car parks are the first port of call for many buildings, Des takes the look, feel and design of them very seriously.

“A car park is often the first place people experience when they arrive at a destination – when you go to a shopping centre or casino or hospital or office, for instance, the car park is the first thing and the last thing you see,” he said.

“The city of Joondalup’s car park was all about passion and pride, they wanted a car park that would make the city feel inviting.

“So we made it bright, neat and safe, and a space that flowed well – a place people could move through easily and know where they were going,” he said.

But with limited materials and an often limited budget, how does Des make his car parks look and feel great?

“It’s all about light. Strategic lighting is so important, you don’t need lots of lighting but you need to be smart about it,” he said.

“Façade lighting is also a great way to brighten up the look of a car park from the outside.

“In order to create airflow car parks must be built with openings, because of this, you’ve inherently got a building that is backlit from the inside, so at nighttime when the lights come on, the building comes alive,” he said.

“Then you work on the façade. The proliferations, the openings, and the way you do the screening all help to make the building truly striking.”

Des said all of these elements came together seamlessly on the Crown Casino car park project.

“The façade at the Crown came up really well, just by turning simple panels to 45 degrees and playing with depth, while keeping everything modular and using clever lighting – it just flows,” he said.

“It’s a simple building but doing something a little bit different, with smart engineering, can make a huge difference.

“Now when you drive past the building, it looks like the façade is changing. I’m really proud of it, it came up beautifully.”

The use of colour is another really important aspect, not only in creating better-looking car parks, but also a space that’s functional and easy to navigate.

“Colour coding is really important in car parks, but it has to be done well so it doesn’t look kitsch and cheap,” he said.

“If you’re going to use a colour, be bold with it, make a feature out of it so people know what floor they’re on.

“In Joondalup, we stuck a vinyl wrap to the walls to add colour and help with navigation, they were printed with maps of Joondalup and really played on the transportation theme.

“If you get your colours right and treat a car park as it should be treated – functional, industrial and informative – it will look great.”

Over the past ten years, Des said technology has also made a difference to the car park design process.

“There is a definite trend to move away from the paper ticketing system,” he said.

“When we did the Elder Street car park the technology just wasn’t there, now the Crown is using ticketing for the general public and a ticketless number plate recognition system for VIPs.

“Joondalup is also using a ticketless number plate recognition system – it really does show the pace at which technology is moving,” he said.

“The tricky thing with camera recognition is getting the sightlines right, understanding the product and designing to make the best of a brilliant system.”

Now based at Hames Sharley’s Darwin studio, Des is project managing his first retail build for the firm, overseeing the design and construction of the Gateway Shopping Center.

“Shopping centres are so different to car parks so it has been a good experience and a great learning curve for me, it’s also fantastic to see more of Australia while still being able to stay with Hames Sharley.

“One thing is for certain, once Darwin’s Gateway Shopping Centre is complete, I’ll be itching to work on another car park. It’s who I am, the Hames Sharley Valet.” 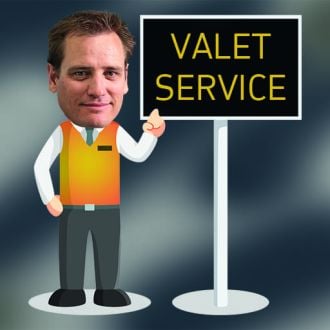