The language of architecture

Writing about language is not for the faint of heart. – To start with, we need to engage philosophers, anthropologists, linguists and psychologists, and even with this multi-disciplinary group of specialists, it is not an easy task. However, I will attempt to articulate how the language of architecture is ‘designed’.

Let’s start at the beginning and define what language is. If we search Wikipedia, it is described as, “the ability to acquire and use complex systems of communication, particularly the human ability to do so, and a language is any specific example of such a system”. Therefore, if we flesh out this definition, we encounter our first piece of this puzzle and this is that any language is a ‘system’. Broadly clarifying this concept, we refer to an organised scheme or method that is constructed by a set of components.

On the other hand, we need to acknowledge the second piece of the puzzle, and that is that the human brain is equipped with the necessary evolutionary resource to undertake linguistic behaviour. This is our ability to learn to produce and understand sounds. This reveals the universality of language to all humans, and it emphasizes the biological basis for the human capacity and the unique development of the human brain.

The third piece - and one over-debated and researched - is that language shapes our thoughts and the way we codify and interpret our experiences, and ultimately our life.

One researcher from Stanford University, Lera Boroditsky, has conducted several studies on ‘how our language shapes the way we think’. In one of her studies, she found that in Pormpuraaw (western edge of Cape York), a small Aboriginal group, the Kuuk Thaayorre, talk about space. Instead of words like ‘right’, ‘left’, ‘forward’, and ‘back’, which are commonly used in English, the Kuuk Thaayorre, like many other Aboriginal groups, use cardinal-direction terms — north, south, east, and west — to define space relative to the observer. This slight difference has an impact on the way they construct their ‘reference frames’. In the case of the Kuuk Thaayorre, it forces them to codify their experience, making them better spatial navigators than the average English speaker.

Because space is such a fundamental domain of thought, differences in how people think about space don’t end there. People rely on their spatial knowledge to build other, more complex, abstract representations.

After working for a multidisciplinary design firm for over eighteen months, I have empirically observed how this group of amazingly original people has a very specific way of constructing and codifying their own ‘reference frames’. When these professionals start to create and imagine, they tap into an array of ‘abstract representations’ that best describe what they want to achieve; the ‘articulation’ of phrases and words that contains a ‘narrative’ plan which is described with ‘aspirations’ or ‘angles’. These become real with ‘materiality’ and have a ‘gradient’ into their ‘density’. The architectural jargon helps illustrate how the language fits perfectly with the three components mentioned above – it is linked by a system unique to their profession; the speakers have the evolutionary resource to learn this vernacular, and finally, the language used defines the profession.

The way architects have ‘designed’ their own language system is through a unique set of verbal cues that seeks to re-define the way we live our experiences, both inside and outside. Their approach - which could mistakenly be seen as selfish – actually has profound roots in the acknowledgement of others’ needs. I have had the opportunity to witness ‘design reviews’ where their knowledge of philosophy, anthropology, economy and psychology blur the lines between what can and cannot be done. 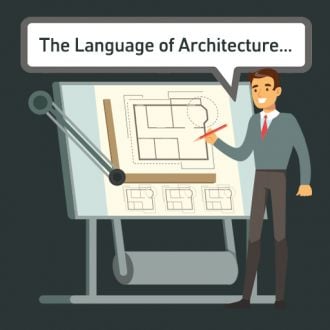