Australians are known all over the world for being straight shooters. Ask an Aussie their opinion and you normally get a straight answer, right? Not anymore…

To the uninitiated, this is confusing at best and cynical at worst. A simple ‘no’ would seem to be a much more straightforward response, yet nowadays ‘Yeah, nah’ is prevalent in our conversations.

So what does Yeah, nah actually mean?

A whole lot of things, actually:

“I think we should proceed straight away.”

(the ‘yeah’ building you up, and the ‘nah’ knocking you down)

A return to a previous topic…

“It was 42 degrees yesterday. I wanted to go swimming but I couldn’t find my bathers so I ended up going shopping for new ones.”

“You played really well in the last quarter.”

“Yeah, nah, the whole team put in a massive effort.”

“Do you want to go out on the boat this weekend?”

“Did you enjoy the food?”

“Did you enjoy the food?”

The key, of course, is context. The experienced listener knows to listen carefully to what comes next after Yeah, nah and decipher the meaning based on this.
Yeah, nah – ‘yes, no’ - became popular in Australia in the 90s and has continued to grow in use, both in Australia and overseas. Like all good things, the Kiwis claim it as theirs too, even using it for a major drink driving campaign.

So where did it come from?

In a small way Yeah, nah flies in the face of the how Aussies are perceived. We are generally known for our direct communication in business, even at the cost of diplomacy, which can inadvertently cause offence.

However, in the past fifteen or so years, we have increasingly adopted Yeah, nah, a face-saving and hedging conversational tool rather than an upfront rejection of prior comments or suggestions.

What does this uptake of Yeah, nah reveal about the Australian psyche? Could it be that we are learning the art of subtlety after all?

According to an early study conducted on the expression, Yeah, nah indicates a more implicit, deeper level of communication than a simple ‘yes or no’. It gives us a way to deal with uncomfortable topics, compliments and opinions in a culturally appropriate manner, and provides a useful segue between the question and the final response.

The seemingly contradictory term is a boardroom regular - a setting in which we usually hope to elicit opinions and give little offence. Yeah, nah provides an informal, easy way to agree, disagree, deflect attention off ourselves and move between topics with a little more tact than we would have twenty years ago.

At Hames Sharley, there are a large number of overseas-born team members. Jack Belfer, National Marketing Director, recalls with amusement hearing Yeah, nah with some confusion when he first arrived on our shores.

“I sat in meetings wondering what this expression meant. In Mexico, we tend to use a lot of words to express what my Aussie colleagues were saying in just two words. It was quite confusing at first.”

I wonder whether - in typical Aussie fashion – we have taken a slightly cynical, humorous expression and incorporated it into our business vernacular so that we don’t have to take the more formal route of other cultures to achieve the same outcomes.

Where the Americans might utter a lengthy, well-delivered sentence, or the Japanese might accompany polite language with effusive body language, perhaps Aussies simply insert Yeah, nah for a quicker segue to our intended message.

As we try to improve our own ability to communicate with others in all spheres of life, it is a useful exercise to step into the listener’s shoes and try to imagine what they perceive to be the message we are trying to communicate.

If we are indeed striving to improve our image in a global market, perhaps it is time to take a step further and trade in Yeah, nah for the real message we are trying to convey. 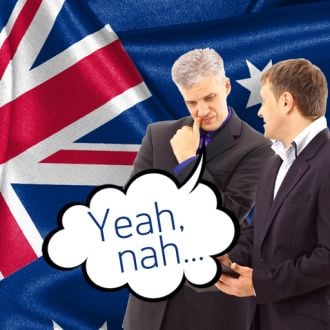