Opening the door on architecture

Fancy an adventure exploring your city?

The rise of urban exploration - or UrbanEx to the cool kids - has seen the rise of a whole new raft of activities. You could try roof topping – that is, taking a selfie with your legs dangling precariously off the edge of a highrise building. Or you could become a tunnel rat, sneaking down through manholes to wander the subterranean labyrinth beneath our streets. How about Parkour – remember the chase scene in Casino Royale with the death-defying leaps across city buildings and construction sites?

For those of us who prefer less extreme adrenaline levels, there’s Open House. This is an event in which buildings across a city throw open their doors to the public for one weekend each year, to enjoy the best architecture on offer.

The first Open House was held by Victoria Thornton in London in 1992 and comprised of 20 buildings that were opened to the public for a weekend. The events have continued annually as a way to build a greater awareness of architecture and its role in creating vibrant cities, and to provide a vehicle for creating a greater engagement in decisions regarding the future of urban communities. The simple but brilliant concept has gone worldwide and now boasts hundreds of thousands of site visits each year.

There are over 30 cities worldwide in the Open House family from London to Lagos, and Galway to Gdynia. Each Open House weekend follows the guidelines given by Open House Worldwide, with the goal of fostering appreciation, understanding and learning amongst communities with the value of architectural excellence and showcasing good design. The events are free of charge and run by the people of the city in their city, for their city.

In Australia, the Open House concept has been embraced across the country, with Melbourne, Brisbane and Perth all in the worldwide Open House Family.

Melbourne is set to hold its tenth Open House at the end of this month, with over 200 buildings all over the city open to the public. There are 84 new buildings on the list, and organisers have teamed up with local artists to produce a spectacular printed program in which iconic Melbourne buildings have been reimagined to create a choice of ten possible covers. Some highlights of this year’s event include a Metro Walking Tunnel Tour, the Myer Mural Hall, Yarraville’s Sun Theatre and many other outstanding metropolitan buildings. If the 2016 lecture program is anything to go by, this year’s speaking program also promises to serve up a feast for design lovers.

This year marks Brisbane’s eighth Open House weekend. Hames Sharley’s newly refurbished Brisbane Studio will open its doors to the public, who will be able to meet the team, learn a little about the studio’s design, as well as gain an insight into the fascinating history of the heritage-listed Rowes Building in which it sits. At the 2016 Brisbane Open House, there were over 68,000 visits on ‘self-designed’ tours through iconic private and public buildings across the city. With more than 80 buildings on this year’s list, once again the event is expected to attract visitors from all walks of life. A Speaker Series, children’s program and photography competition will provide something to delight, involve and inspire all ages. For our part, the Queensland team are planning some fun and interactive activities designed to entertain visitors of all ages.

“The number of buildings involved in Brisbane Open House has quadrupled since its inception in 2010, but more importantly the public support and engagement of this event has also grown hugely, proving our community is unequivocally interested in exploring and celebrating our built environment – and how this environment contributes to our society and shapes our community,” says Queensland Government Architect Malcolm Middleton.

Since its inception in 2012, Open House Perth has attracted thousands of visitors, with an estimated 200,000 hours spent traipsing through the city’s built environment during the 2016 event. Perhaps one of the greatest drawcards for the public is the opportunity to have a sticky beak into private residences across the city, each worthy of their own Grand Designs episode. The Swan Bells Tower, designed by the Hames Sharley team, is also a regular on Open House tours. To eager return visitors, the opportunity to ‘be a tourist in your own town’ has tickled their fancy, and the free entry a huge drawcard.

The increasing popularity of the Open House weekends across Australia and the world is a sign that the core objective of fostering a greater interaction between city dwellers and the built environment in which they work and live is, to date, a great success.

For more information on upcoming Open House weekends, go to: 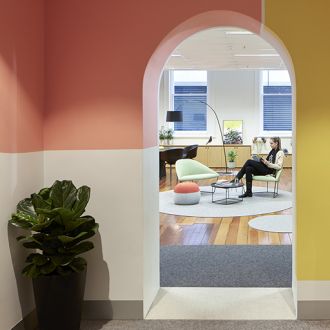