Would you bring your mom here…?

When I was younger and considered myself far more hip than I really am, I used to read WIRED magazine. A bit obscure and with an almost obsessive love for bleeding-edge technology, it had an exclusive bunch of readers, and often featured a newfangled thing called the “internet”. Of all things WIRED embraced, the most beloved was how the worldwide web would disrupt everything in our world.

Like most tech magazines, WIRED zealously reported on all the conventions facing annihilation from this cybernautic onslaught. Most of its smug braying focused on how the internet would be the death of the retail centre. In a world where we could sit at home and order all sorts of stuff without stepping away from our warm, glowing screens, shopping malls were anachronisms.

Of course, the internet Shoppageddon didn’t happen; indeed, those retail centres that are doing things right are faring rather nicely, thank you very much. Which shouldn’t be much of a shock, given that the whole “online shopping” thing had failed to kill off retail once already. Readers of a certain age may remember The Gowings Catalogue or even the Elders Farm Supplies Catalogue. Readers of an even greater age (like, about 150 years old), may remember the first Sears, Roebuck and Co. Catalog, which Richard Sears himself proclaimed to sell from “the cheapest supply house on Earth”, the trade for which “reaches around the world”*.

Back then you eagerly awaited the latest catalogue, browsed eagerly through it and chose a bunch of lumberjack shirts, sturdy boots and twill pants (still a hipster favourite), with maybe a saddle and a few guns for good measure. A cheque was written, off it went and a little while later Cobb & Co. delivered a nice parcel wrapped in brown paper and string. You had a couple of selfies painted, and if the twill pants chafed, back they went and your money was refunded. Like a more leisurely version of The Iconic.

To put it another way, bricks and mortar has always had competition, and has, by and large, acquitted itself rather well.

But perhaps the threat of online shopping isn’t the real problem. Perhaps it’s just a distraction from the true problem real-world retailers face: complacency, and the struggle to remain relevant.

When it comes to relevancy, any retailer who still views online shopping as a threat that must be fought is probably beyond help. Even further gone are those retailers who still think of the internet as a novelty. For example, close to our office there is a CBD shopping centre with giant pink banners that proudly proclaim it has “Free Wifi!”. Very noble. Except everyone has free Wifi these days. Anyone who doesn’t… well, if your Wifi isn’t fast and super-easy, I’ll hoof it next door. You’re not the only mall with a Boost Juice, you know?

Of course, logging on to a centre’s Wifi means I’ll be receiving emails from them forever after, but I don’t mind that, so long as they try to make the emails relevant. My name is pretty clearly male, so don’t send me sales offers for women’s fashion. Don’t direct me to a dull website that hasn’t changed appearance in six months. And why does a Melbourne shopping centre insist on sending me regular emails when my postcode obviously shows I live in Queensland? Send me emails from one of your cousin centres in Brisbane – they would be relevant.

When the traditional ‘main street’ stopped being relevant, retail malls were there to step in. Changing needs and growing expectations of customers had made main streets less convenient – people were tired of poor (or non-existent) parking and poor amenities such as lack of washrooms and parent’s rooms. Existing design constraints and resistance to change from a multitude of stakeholders resulted in public spaces that became less and less attractive, with little to no design control or attempt to create ‘people places’. Fundamental errors such as expensive parking meters and disproportionate parking fines don’t help (apparently $270 parking fines have done little for restaurant patronage in Sydney’s Newtown, for instance). The modern retail centre addresses these issues – sometimes with varying degrees of success, but it addresses them nonetheless.

Having said that, a new form of main street is emerging that is directly relevant to residents, in competition to retail centres, particularly as the retail fashion offering loses some of its shine. And it’s perhaps these, not online shopping, that retail centres need to be more wary of. 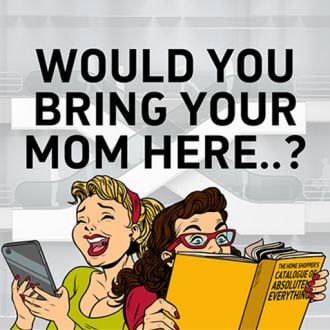