Extreme weather conditions have made news headlines in the past month, with major hurricanes making landfall in large parts of America.

Hurricane Harvey caused 132cm (52”)of rainfall in Texas, the highest ever rainfall total for any Atlantic tropical cyclone in the USA, while Hurricane Irma has been recorded as the strongest hurricane ever to form in the Atlantic Ocean outside of the Gulf of Mexico and the Caribbean Sea.

As floodwaters from Hurricane Harvey receded, The New York Times reported that much of the damage to infrastructure could have been avoided.

Using time-lapse flood-hazard maps, the Times’ website illustrates Houston’s 100-year floodplain, an area with a one percent risk of flooding in any given year. Within this zone, homeowners are required to have federally sponsored flood insurance, to mitigate against the city’s financial ruin. For Houston, those maps were thoroughly inadequate, with countless homes flooded during Hurricane Harvey even though they were located far from the designated floodplains. 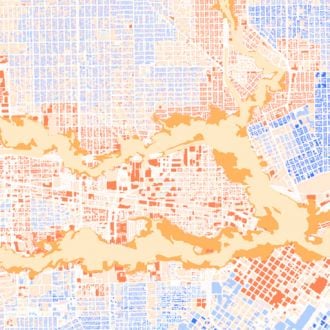