Walkable cities are, quite simply, better for everyone.

Walking requires low technology, it is cheap, and it combines flexibly with other modes of transport, at the same time resolving acute environmental, economic and social issues in cities.

According to Jeff Speck, there are four key components to walkability: safety, usefulness, comfort and interest. In other words, there has to be a useful destination to walk towards, walkers need to know that there is no danger of being hit by a car on the way, the spaces they walk through need to feel like ‘outdoor living rooms’, and they need to see friendly faces and interesting things along the way. Coupled with ongoing sustainability, the walkability of a city is both “an end and a means, as well as a measure,” writes Speck.

With cities like Oslo, Copenhagen, Seoul and Vancouver leading the way, there are dozens of cities around the world bringing pedestrians back into cities. To do this, they are putting pedestrians first and limiting cars.

Walking is the top transport priority in Vancouver, with pedestrian-controlled traffic signals, vast promenades and denser housing all a part of the green zones that have been created. Since 1996 the number of cars entering downtown Vancouver has decreased by 20%, and within the city, 26% of all trips are now done on foot.

‘Goodbye car, Good day Seoul’ has been the slogan of Seoul’s walkability campaign. Projects such as the Cheonggyechon Restoration have seen public spaces brought to desolate parts of the city, and with them, people.

In Seoul, the ‘Road Diet’ is a project that has reduced usable car space on city streets, to be replaced by larger bicycle lanes, greenery and pedestrian spaces. Since its inception in 2016, there has been a boom in the number of pedestrians on the streets, bringing with them street performers and activity.

One of the most successful car-free initiatives in Seoul has been the introduction of ‘Children’s Streets’. The implementation of these safe walking streets for children at school times has seen a reduction in the speed and amount of traffic near schools and an increase in the number of kids walking to school. Due to the overwhelming success of this initiative, by 2018 there will be 222 Children’s Streets across Seoul.

In China, Great City in Chengdu has an ambitious ‘15-minute walk to anywhere’ plan for the 80,000 citizens expected to make it home. Rather than creating large green zones, the approach taken here is to block 50% of the city’s roads to vehicles, providing interconnectivity for pedestrians with amenities.

Barcelona is a city trying desperately to kick some goals in reducing pollution and giving the city ‘back to the people’. The chaos on the roads – and often the pavements – has made the city centre dangerous for pedestrians and cyclists alike. In its 2014 Urban Mobility Plan, Barcelona finalised plans for superilles (superblocks) which will create mini-villages given over to pedestrians and cyclists, with very limited vehicle access at a maximum speed of 10km/h. Creators of the superblock program predict that up to 60% of the city’s road space can be shifted to mixed-use or car-free zones.

There are numerous projects now taking back road and rail infrastructure for pedestrians akin to New York’s High Line. ‘Seoullo 17’ (Seoul Street) has just been completed, a project which has seen a lush public park with over 24,000 plants created from a mile of elevated roadway. Other infrastructure conversions such as the Rose Kennedy Greenway in Boston and Madrid Rio in Madrid have created people-friendly zones which have given a new lease of life into cities.

Similarly, cities such as Melbourne have transformed previously unattractive areas into laneways buzzing with people and activity, while connector paths linking sporting venues and tourist attractions have brought people onto the banks of the Pearl River in their throngs in Guangzhou.

A major component of walkability is transit into and out of walkable zones. Many of the cities above have also invested heavily inefficient public transport systems which can bring people into walkable areas. Helsinki has increased services and provided free public transport, resulting in a higher uptake of public transport use. While critics of this system say that it is not sustainable over the long-term, the key goal is to get people out of cars and to provide mixed modality in transport.

There has also been a major push towards creating safe, fast bicycle routes into and through cities. Copenhagen, boasting one of the lowest car ownership rates in Europe, has an extensive ‘cycle superhighway’ network, with a total of 39 routes to be completed by the end of 2018. London currently has seven cycle superhighways, with a plan to build more, and there are even resources now to help cyclists find the best route through London, such as this tube-style map.

While it’s impossible to eradicate cars entirely, the inroads being made in the walkability of cities is greatly increasing the quality of life in those cities, some of them now gracing the world’s most livable cities lists.

After all, according to Hippocrates, “walking is man’s best medicine”. 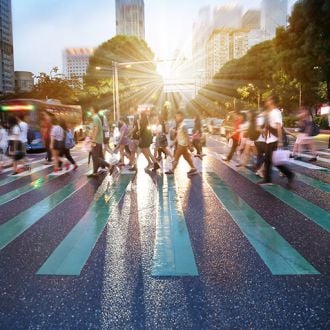