Do you want mixed use with that? 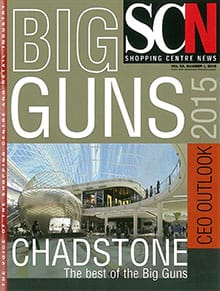 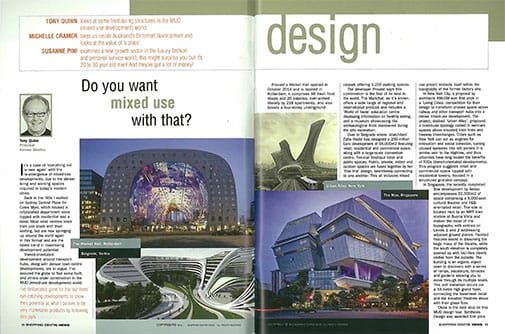 It’s a case of ‘everything old is new again’ with the re-emergence of mixed-use developments, due to the denser living and working spaces required in today’s modern cities. Back in the ‘90s I worked on Sydney Central Plaza for Coles Myer, which housed a refurbished department store topped with residential and a hotel. Most retail centres since then just stuck with their knitting, but are now springing up around the world again in this format and are the latest trend in maximising development potential.

Transit-orientated development around transport hubs, along with denser town centre developments, are in vogue. I’ve scoured the globe to find some built, and others under construction in the MUD (mixed-use development) world.

I’ve deliberately gone for the ‘out there’ eye-catching developments to show their potential as what I believe to be very marketable products by following this path.

The developer Provast says this combination is the first of its kind in the world. The Markthal, as it’s known, offers a wide range of regional and international produce and includes a ‘World of Taste’ education centre displaying information on healthy eating, and a museum showcasing the archaeological finds discovered during the site excavation.

Over to Belgrade where ‘starchitect’ Zaha Hadid has designed a 200-million Euro development of 94,000 square metres featuring retail, residential and commercial space, along with a large-scale convention centre, five-star boutique hotel and public spaces. Public, private, indoor and outdoor spaces are fused together by her ‘flow line’ design, seamlessly connecting to one another. This all-inclusive mixed-use project embeds itself within the topography of the former factory site.

In New York City, a proposal by architects AMLGM won first prize in a ‘Living Cities’ competition for their design to transform unused space above railway and other transport hubs into a dense mixed-use development. The project, dubbed ‘Urban Alley’, proposed a mixed-use typology rooted in remnant spaces above elevated train lines and freeway interchanges. Cities such as New York can act as engines for innovation and social cohesion, turning unused eyesores into silk purses in similar vein to the Highline, and thus urbanists have long touted the benefits of TODs (transit-orientated developments). This program suggests retail and commercial space topped with residential towers, housed in a structured grid-skin concept.

In Singapore, the recently completed Star development by Aedas encompasses 62,000 square metres of space comprising a 5,000-seat, cultural theatre and F&B-orientated retail. The site is located next to an MRT train station at Buona Vista and makes most of the topography with entries on Levels 1 and 2 addressing adjacent ground planes. Faceted fissures assist in dissolving the large mass of the theatre, while the south elevation is completely opened up with facilities clearly visible from the outside. The building is an organic object open to discovery with a series of ramps, escalators, terraces and gardens, allowing you to move through its multiple levels. This soft transition occurs via a 33-metre high grand foyer, connecting the lower-level retail and the elevated theatres above with their glass floor.

China is the next stop on this MUD design tour. Synthesis Design was awarded first prize in an International Design Competition in 2013 for the Shanghai Wuzhou International Plaza. Their scheme, entitled ‘Urban Canyon’, was inspired by the Chinese concepts of yin and yang and is organised around two solid volumes pulled apart; the flowing canyon connects the project to the urban fabric of the city. The northern block features a four-storey luxury retail podium, commercial offices and a five-star hotel tower. The southern block is made up of four levels of retail, lifestyle and entertainment and is anchored by two commercial towers. The flowing river canyon connects the two entry plazas of the site with freestanding retail ‘pebbles’ connected via bridges. A series of green ‘islands’ are distributed throughout the canyon and provide a softening against the otherwise urban form. The area of the development is 180,000 square metres, with a projected cost of US$250 million.

The next project currently under construction is the Summer International Shopping Mall by Chinese architect 10 Design in Zhuhai. The project comprises 500,000 square metres and when complete, will include retail, commercial, hotel and residential components. The centre is partly open with link bridges connecting at upper levels, while at the ground level it connects into Zhuhai’s street pattern. The building is developed as a series of blocks, with breakout points above in the form of giant cantilevered LED entry features, and a series of meandering paths (malls) that undulate and break out at various nodes of shaded courtyards.

Another China-based project is by American boutique firm Trahan Architects in Zhengzhou, with a floor area of 400,000 square metres, located in the historic city centre. Challenging China’s conventional typology, the proposal blends hotel and live/work top above a retail base. The hotel and live/work program is rotated at the corners framing both the interior and exterior. Green boulevards flow into and up the edges of the site to create a green urban space of the upper levels, while the retail steps down in plan and section for greater connectivity to the adjacent urban edges. The graduated triangular facade reinforces the corners and provides a unifying skin to the whole development.

Mixed-use developments are now clearly back on the agenda, both in Australia and overseas.

The Britomart Effect, what is the value of a postcard image? Why the arcade is ‘almost right’
Latest News
12 April 2022