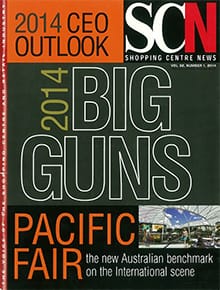 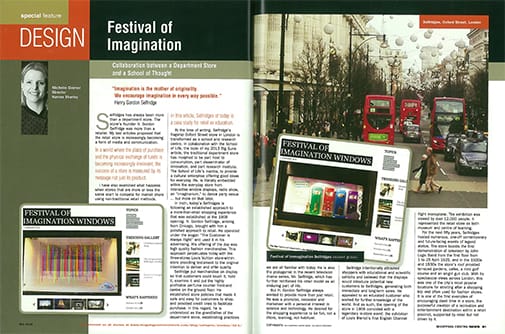 Collaboration between a Department Store and a School of Thought

“Imagination is the mother of originality. We encourage imagination in every way possible.”

Selfridges has always been more than a department store. The store’s founder H. Gordon Selfridge was more than a retailer. My last articles proposed that the retail store is increasingly becoming a form of media and communication.

In a world where the place of purchase and the physical exchange of funds is becoming increasingly irrelevant, the success of a store is measured by its message not just its product.

I have also examined what happens when stores that are more or less the same start to compete for market share using non-traditional retail methods.

In this article, Selfridges of today is a case study for retail as education.

At the time of writing, Selfridge’s flagship Oxford Street store in London is transformed as a school and research centre. In collaboration with the School of Life, the topic of my 2013 Big Guns article, the traditional department store has morphed to be part host to consumption, part disseminator of innovation, and part research institute.

The School of Life’s mantra, to provide a cultural enterprise offering good ideas for everyday life, is literally embedded within the everyday store from interactive window displays, radio show, an ‘Imaginarium’, to dance party venue… but more on that later.

In truth, today’s Selfridges is following an established approach to a more-than-retail shopping experience that was established at the 1909 opening. H. Gordon Selfridge, arriving from Chicago, brought with him a polished approach to retail. He operated under the slogan ‘The Customer is Always Right’ and used it in his advertising. His offering of the day was high quality fashion merchandise. This approach perpetuates today with the three-storey Louis Vuitton store-within-store providing testament to the original intention to deliver and offer quality.

Selfridge put merchandise on display so that customers could touch it, hold it, examine it and put the highly profitable perfume counter front-and-centre on the ground floor. He established store policies that made it safe and easy for customers to shop, and provided credit lines to facilitate purchase. In this regard, he is understood as the grandfather of the department store, establishing practices we are all familiar with today. He is also the protagonist in the recent television drama series, Mr. Selfridge, which has further reinforced his retail model as an enduring part of life.

But H. Gordon Selfridge always wanted to provide more than just retail. He was a promoter, innovator and marketeer with a personal interest in science and technology. He desired for the shopping experience to be fun, not a chore, learning, not habitual.

Selfridge intentionally attracted shoppers with educational and scientific exhibits and believed that the displays would introduce potential new customers to Selfridges, generating both immediate and long-term sales. He appealed to an educated customer who wished for further knowledge of the world. And as such, the opening of the store in 1909 coincided with a legendary in-store event: the exhibition of Louis Bleriot’s first English Channel flight monoplane. The exhibition was viewed by over 12,000 people. It represented the retail store as both museum and centre of learning.

For the next fifty years, Selfridges hosted numerous, one-off contemporary and future-facing events of legend status. The store boasts the first demonstration of television by John Logic Baird from the first floor from 1 to 25 April 1925, and in the 1920s and 1930s the store’s roof provided terraced gardens, cafes, a mini golf course and an all-girl gun club. With its spectacular views across London, this was one of the city’s most popular locations for strolling after a shopping trip and often used for fashion shows.

It is one of the first examples of encouraging dwell time in a store, the purposeful creation of a recreation and entertainment destination within a retail precinct, supported by retail but not driven by it.

In 1932, the store became a place of scientific research. A Milne-Shaw seismograph was set up on the Selfridge store’s third floor. It was attached to one of the building’s main stanchions, unaffected by traffic or shoppers. Famously, it recorded the significant Belgian earthquake of 11 June 1938 providing much sought after data for seismologists. In 1947 the seismograph was gifted to the British Museum. It is arguably the first, if not only, example of non-retail based research being undertaken within a retail store.

For the second half of the 20th century, either by function of war, a focus on retail consumption, or the death of Selfridge himself on 8 May 1947, little to no education has been undertaken in store. Enter Creative Director Alannah Weston. Buoyed by the success of the inaugural ‘No Noise’ campaign of 2013, which invited shoppers to ‘celebrate the power of quiet’ and find calm in the oft-chaotic department store setting, Selfridges is seemingly comfortable turning contemporary notions of retailing and branding on its head.

From January to February 2014, Selfridges is the venue for the Festival of Imagination. The aim of this festival is to celebrate H. Gordon’s mantra; “Imagination is the mother of originality. We encourage imagination in every way possible”, but with a resolutely contemporary twist.

The festival is showcased at the London store through an intelligent, smart, yet amusing conceptual window scheme created by over 15 designers, a future-facing pop-up shop and an Imaginarium’, effectively a venue for imagination exploration by another name.

An ‘Imaginarium’ is also located in Selfridges store in Birmingham and in Manchester’s Exchange Square.

First, the windows. Selfridges world famous window shopping has been augmented to explore the imagination of an eclectic mix of celebrated imagineers, rather than store products. They showcase the ideas and visions of such thinkers as maverick designer Rolf Sachs to architecture and design practice Minimaforms which has produced mind-boggling futuristic human-sensitive creatures.

They explore notions from the future of camping – a device for contemporary escapes – to new technologies for lighting and colour, through to British design innovator and artist Dominic Wilcox’s imaginary products that give convenience and luxury a playful twist.

Then, the Pop-Up Imagine Shop. This is a one-of-a-kind retail experience showcasing future-facing products, as well as a preview of the future of shopping devised and curated by Dezeen, one of the most influential resources and ideas banks in the world for architecture and design, in collaboration with Selfridges’ technology buying team.

One of the highlights of the Imagine Shop is the augmented reality experience, engineered by leading AR specialists Inition, which allows the customer to preview in 3D and with an impressive level of detail for something entirely virtual, the most expensive yacht in the world at £300,000,000, all by holding a tablet responding to an encoded graphic laid on top of a small table. At a smaller scale, shoppers are able to practice and hone their virtual reality e-trading by experimenting with a virtual watch shop.

Finally, the Imaginarium. This is the hub of the festival, a temporary contemporary amphitheatre space designed by Rem Koolhaas. It showcases events in conjunction with the Imagineers, the School of Life’s education programme, and Super/collider that presented, among other things, the future of Biofashion.

In this proposition, Suzanne Lee and her Biocouture team propose that in the near future sewing machines could be replaced by vats of liquid creating vast, silent factories where clothes, shoes and accessories are grown, not sewn.

It is within this zeitgeist that, perhaps now unsurprisingly, I found myself at the Imaginarium at high noon on Saturday 18 January 2014 attending the School of Life ‘Dance Party’ with Dr Peter Lovatt at the Selfridges Oxford Street store. Lovatt runs a Dance Psychology Lab that addresses genuine research questions like: How does dancing change the way people think and how does dance happiness change our behaviours?

Participants were taught the psychology of dance and a few simple dance moves and thereby contributed to a body of research work focused on the contemporary inhabitant of our world, ultimately the contemporary consumer. It is a return to H. Gordon Selfridge’s retail store as a place of research, albeit psychological not scientific.

H. Gordon Selfridge would be most pleased. Selfridges’ Festival of Imagination is about people’s education and evolution rather than their consumption. Audience participation and interaction is encouraged, culminating in an invitation to enter ideas for a new retail experience in a competition which will see the winning concept implemented by Selfridges by 2015. The proposition that the retail store can contribute to the ongoing advancement of the human condition is alive and well. Retail is most certainly the message contributing to the progression of the product.

See Michelle Cramer’s previous article, ‘The medium is the supermarket’