The medium is the supermarket 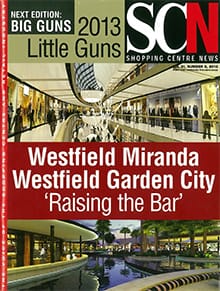 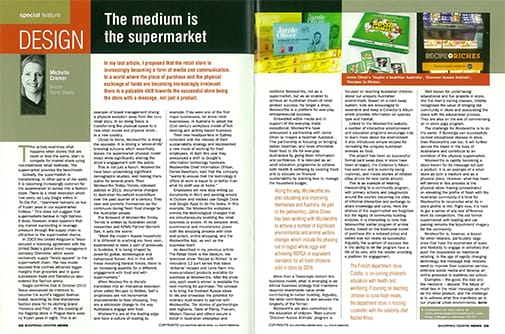 In my last article, I proposed that the retail store is increasingly becoming a form of media and communication. In a world where the place of purchase and the physical exchange of funds are becoming increasingly irrelevant there is a palpable shift towards the successful store being the store with a message, not just a product.

This article examines what happens when stores that are more or less the same, start to compete for market share using non-traditional retail methods. The supermarket provides the benchmark.

Globally, the supermarket is transforming. In other parts of the world it is becoming increasingly common for the supermarket to evolve into a fashion store. There is a retail revolution which now sees, as Lucy Siegle writes in ‘To Die For’, “cashmere twinsets on top of frozen peas in our supermarket trolleys”. This does not suggest that supermarkets believe in high fashion. It does, however, make apparent that any market succeeding in leverage pressure through the supply chain is attractive to the supermarket chains.

In 2003 the United Kingdom’s Tesco secured a licensing agreement with the United State’s global brand management company Cherokee, which would exclusively supply ‘family apparel’ to the supermarket chain. The new model exposed that clothes attracted bigger margins than groceries and in quick succession Asda and Sainsbury’s also entered the fashion arena.

Siegle confirms that in October 2010 Tesco announced its intention to become the world’s biggest fashion brand, launching its first standalone fashion store for its clothing brand ‘Florence and Fred’. At the opening of the flagship store in Prague there were no frozen peas in sight. This is an example of brand management driving a physical evolution away from the core retail story. In so doing Tesco is transforming the physical space to a new retail model and physical store… in a new country.

Closer to home, Woolworths is doing the opposite. It is driving a ‘whole-of-life’ branding outcome which essentially leaves the supermarket physical model intact while significantly altering the store’s engagement with the public.

This is not just a hunch. Woolworths have been undertaking significant demographic studies, and making them public for several years. Their Woolworths Trolley Trends, released publicly in 2011, documents changes to Australian household expenditure over the past quarter of a century. They view and promote themselves as the continuum during fresh food change for the Australian people.

The foreward of Woolworths Trolley Trends is written by Australian social researcher and KPMG Partner Bernard Salt. It sets the scene:

“Meet the modern Aussie household. It is different to anything you have seen, experienced or been a part of previously in Australia. It is being shaped by powerful global, technological and behavioural forces. And in line with these morphing familial forces, there is an increasing appetite for a different engagement with food and with supermarkets.”

When Woolworths is literally translated into an interactive television show called Recipes to Riches, Salt’s prophesies are not incremental improvements to food shopping, they are a wholesale change to the way Australians engage with food.

Woolworths are at the leading edge and have a culture of leading by example. They were one of the first major businesses, let alone retail businesses, in Australia to adopt the 21st century workplace model of hot-desking and activity based business.

Their new headquarters in Sydney coincided with the release of their sustainability strategy and represented a new mode of working for their employees. In April this year they announced a shift to Google’s information technology hardware. Woolworths Chief Information Officer, Daniel Beecham, said that the company “wants to ensure that the technology it offers at work is equal to or better than what its staff use at home.”

Employees will now stop writing up documents in Word and sending emails in Outlook and instead use Google Docs and Google Apps to do the tasks. In this example, the Woolworths workplace mirrors the technological changes that are simultaneously enabling the retail business to evolve. At its simplest level, e-commerce and m-commerce power both the shopping process with click and collect, online shopping, and the Woolworths App, as well as the business itself.

As described in my previous article The Retail Store is the Medium, the television show ‘Recipe to Riches’ is an innovative 12 part series that takes ‘at-home’ recipes and turns them into mass-produced products available for purchase at Woolworths. After the show airs, each week’s winner is available the next morning for purchase. The concept is to bring the freshest Aussie ideas to life and showcase the potential for ordinary Australians to partner with Woolworths. The stories of partnerships with Inghams, Table of Plenty, Five:am, Madam Flavour and others secure a belief in Australian enterprise and reinforce Woolworths, not as a supermarket, but as an enabler to achieve an Australian dream of retail product success. No longer a shop, Woolworths is a platform for everyday entrepreneurial success.

Embedded within media and in support of the everyday made exceptional, Woolworths have announced a partnership with Jamie Oliver to ‘inspire a healthier Australia’. This partnership is focusing on bringing better, healthier, and more affordable fresh food to life for everyday Australians by giving them information and confidence. It is intended as an adult education programme to achieve both health & wellbeing by cooking fresh and to educate on financial sustainability by learning how to manage the household budget.

Along the way, Woolworths are also educating and improving themselves and Australia. As part of the partnership, Jamie Oliver has been working with Woolworths to achieve a number of significant environmental and animal welfare changes which include the phasing out of caged whole eggs and achieving RSPCA or equivalent standards for all fresh chickens sold in store by 2018.

More than a Tesco-style bottom line business model, what is emerging is an ethical business strategy that maintains required shareholder value while contributing to nation building. Arguably, the latter contributes to and secures the longevity of the former.

Woolworths are also committed to the education of children. Their current ‘Discover Aussie Animals’ program is focused on teaching Australian children about our uniquely Australian environment. Based on a card swap system, kids are encouraged to assemble and keep a Collector’s Album which provides information on species type and habitat.

Linked to the Woolworths website, a number of interactive entertainment and education programs encourage kids to learn more about the environment. It also introduces simple recipes for recreating the uniquely Australian animals as food.

The project has been so successful formal card swap days in store have been arranged, the Collector’s Album has sold out and is currently being reprinted, and media stories of inflated eBay prices for rare cards abound.

This is an example of retailing transcending to a community programme, with primary schools and playgrounds around the country becoming the sites of informal interaction and exchange to share knowledge and cards. Here the shelves of the supermarket are forgotten but the legacy of community building endures. It is interesting to note that Woolworths’ earlier program of animal books, based on the traditional model of purchase (for a reduced price) and collect was not nearly as successful. Arguably, the quantum of success lies in the ability to let the program have a life of its own, with the retailer providing a platform for engagement.

The French department store, Colette, is co-joining children’s education with health and wellbeing. Focusing on teaching children to cook fresh meals, the department store is hosting ‘cooklette’ with the celebrity chef Rachel Khoo.

Well known for undertaking educational and fun projects in store, like the men’s ironing classes, Colette recognises the value of bringing the community in store and associating the place with the educational process. They are also on the eve of commencing an in store yoga programme.

The challenge for Woolworths is to do the same. If Bunnings can successfully co-host educational classes in store, then Woolworths can too. It will further secure the brand in the lives of Australians and contribute to an evolution of the physical supermarket.

Woolworths is rapidly becoming a store known for its message not just a product. It is an example of a retail store as both a medium and as a physical place. However, what has been left behind in this process is the physical store. Having concentrated on elevating the profile of fresh with the Australian community it’s time for Woolworths to reconsider what its in store profile is like. Right now, it’s hard to get a sense of any real difference from its competitors. The old format supermarket with loading and car parking remains the top-of-mind imagery for the community.

Woolworths is, however, a lesson for other retailers, particularly large ones that have the economies of scale and flexibility to engage in activities that push the boundaries on traditional retailing. In the age of rapidly changing technology, the message that retailers need to improve their customer service, embrace social media and develop an online presence is suddenly old school.

Examples -the good, the bad and the mediocre - abound. The future of retail lies in the retail message as much as the retail product, and the challenge is to witness what this manifests as in our physical urban environments.