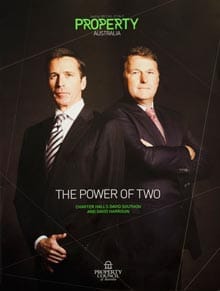 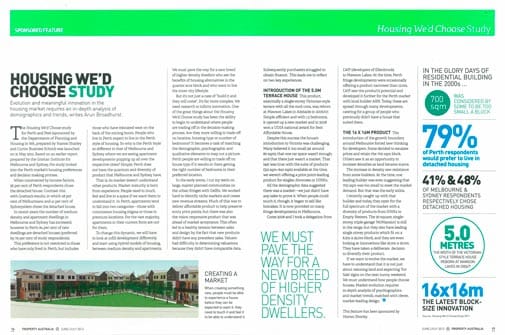 Evolution and meaningful innovation in the housing market requires an indepth analysis of demographics and trends.

Results of the Housing We’d Choose study for Perth and Peel (sponsored by the Departments of Planning and Housing in WA, prepared by Hames Sharley and Curtin Business School ) was launched on the 30 May 2013. Based on the earlier report prepared by the Grattan Institute for Melbourne and Sydney, the study looked into the housing preferences and decision making process of the Perth market. The results were stark. Unlike Melbourne and Sydney which had a preference of 41% and 48%, Perth overwhelmingly prefers the detached house with 79% of respondents selecting this housing type. Interestingly, this preference was not restricted to those who had only lived in Perth, but permeates the rest of the population who have headed west on the back of the mining boom. People who live in Perth expect to live in the Perth style of housing.

So why is the Perth “style” so different to that of Melbourne and Sydney? The answer is simple; Perth does not have the quantum and diversity of product which Melbourne and Sydney have. In other words it hasn’t been trained. Market maturity is born from experience. We need people to touch it, feel it and live in it before we can expect them to want it. In Perth, apartments tend to fall into two categories, those with commission housing stigma or those for the exceedingly rich in premium locations. For the vast majority of people, apartments in their current form are not for them. So why would they want to live in a form of housing which they have never experienced or needed to?

To change this dynamic, we will have to look at infill development differently and start to use hybrid models of housing between medium density and apartments. They will have to pioneer and pave the way for new breed of higher density dwellers that see the benefits of alternative housing to the quarter acre block and want to live the inner city lifestyle.

But hang on, let me just clarify for a moment. It’s not “build it and they will come”, it’s far more complex. I’m talking about using research to inform innovation (revolutionary I know). One of the great things about the Housing We’d Choose study has been the ability to begin to understand where people are trading off in the decision making process. Are they more willing to trade of on location, housing type or number of bedrooms, etc.? It becomes a task of matching the demographic, psychographic and qualitative elements to map out a picture. Perth people were more willing to trade off of house type to ensure they could get the right number of bedrooms in their preferred location. So the question is, why then are we still building so many detached houses? Perhaps because there is insufficient stock.

In the early 2000’s I was cutting my teeth on large master planned communities on the urban fringes with Delfin.

Our mantra was to open new markets to create new revenue streams. However this often led to a healthy tension between sales and design by the fact that new products didn’t have any precedent sales and were therefore risky. We couldn’t even get them valued and in one case we had to go guarantor for the people we were selling the lots to because no valuer had any data on a comparable product.

I reflecting on two key experiences:

Introduction of the 5.0m Terrace House

Reborn at Mawson Lakes in 2006/2007, this product was essentially a single storey Victorian era terrace with all the mod cons. It was simple, efficient and opened up a new market. It won a UDIA national award for best affordable house in 2007.

Despite its success at Mawson, the introduction to Victoria was challenging. Many believed it was too small at 87sqm, 1 car space wasn’t enough for the fringe and that there wasn’t a market. Well, that was true, there wasn’t a market. With the suite of products (312sqm – 640sqm) available at the time, we weren’t offering a product to this demographic. So we were pioneering but with sound reason to do so. All the demographic data suggested that there was a market, it was just that we didn’t have any sales to prove it. When people could touch it, their opinions changed. Once the market could see the house in the flesh it sold like hot cakes and is now openly provided on many fringe developments in Melbourne.

Come 2008 and I took a delegation from LWP (developers of Ellenbrook) to Mawson Lakes to see the project. At the time Perth fringe developments were occasionally offering a product narrower than 12.0m but these were generally rear loaded and the additional land and expense made them a marginal product if affordability and catering for a new demographic were the driving factors. LWP had the foresight to see the potential of this product and develop it further for the Perth market with local builder ABN in partnership with the Department of Housing. Today these are littered through many developments in Perth, catering for a whole group of people who didn’t have a house which suited them.

The introduction of the growth boundary around Melbourne forced new thinking for developers. Some saw it as an opportunity to increase densities as land became scarce. Others decided to escalate prices and retain the 700 sqm block. The increase in density saw resistance from builders, not only because they had tried and tested product, but also because the projects with larger blocks and higher prices were still selling exceptionally well. There were many debates with builders about the future of land products. One leading builder was even suggesting that 700 sqm was too small. But that was early 2000s. I recently caught up with this builder for a beer. It was amazing to see the shift. Today, they still have the 30-square, single-storey, triple-garage McMansion, but they have leading singlestorey products which fit on a 8.5m x 25.0m block, and they are even looking at innovations like a 16.0m x 16.0m. How times have changed. If we want to evolve the market, we have to understand that it is not just about rezoning land and expecting sale signs up on the next sunny weekend. Evolution requires an indepth analysis of demographics and market trends, and needs incremental innovation and clever design that leads the market.