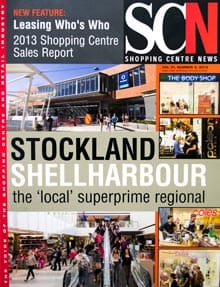 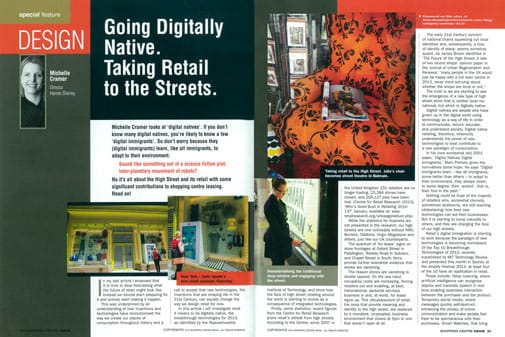 In my last article I proposed that it is time to stop forecasting what the future of retail might look like. Instead we should start preparing for it and actively start making it happen. This was underpinned by an understanding of how inventions and technologies have revolutionised the way we create our places of consumption throughout history and a call to accept that new technologies, the inventions that are shaping life in the 21st Century, can equally change the way we design retail for now. In this article I will investigate what it means to be digitally native, the breakthrough technologies for 2013, as identified by the Massachusetts Institute of Technology, and show how the face of high street retailing around the world is starting to evolve as a consequence of integrated technologies.

Firstly, some statistics: recent figures from the Centre for Retail Research prove retail’s retreat from high streets. According to the Centre, since 2007 in the United Kingdom 231 retailers are no longer trading, 23,284 stores have closed, and 209,127 jobs have been lost. (Centre for Retail Research (2013), ‘Who’s Gone Bust in Retailing 2010-13?’ January, available at: www.retailresearch.org/whosegonebust.php) While the statistics for Australia are not presented in the Centre’s research, our high streets are now noticeably without HMV, Borders, Oddbins, Virgin Megastore and others, just like our UK counterparts. The quantum of ‘for lease’ signs on stores frontages at Oxford Street in Paddington, Rokeby Road in Subiaco, and Chapel Street in South Yarra, provide further anecdotal evidence that stores are vanishing.

The reason stores are vanishing is double layered. On the one hand occupancy costs are increasing forcing retailers out and enabling, at best, transnational, personal services business in and, at worst, for lease signs up. This (dis)placement of retail, the ones that provide meaning and identity to the high street, are replaced by a mundane, un-peopled, business environment that closes at 5pm or one that doesn’t open at all. The early 21st Century concern of national chains squeezing out local identities and, subsequently, a loss of identity of place, seems somehow quaint. As James Brown identifies in ‘The Future of the High Street: A tale of two record shops’ opinion paper in the Journal of Urban Regeneration and Renewal, “many people in the UK would just be happy with a full town centre in 2013, never mind worrying about whether the shops are local or not.” The truth is we are starting to see the emergence of a new type of high street store that is neither local nor national, but which is digitally native.

Digital natives are people who have grown up in the digital world using technology as a way of life in order to communicate, record, educate, and understand society. Digital native retailing, therefore, inherently understands the power of new technologies to best contribute to a new paradigm of consumption. In his (now somewhat old) 2001 paper, ‘Digital Natives Digital Immigrants,’ Marc Prensky gives the non-natives some hope. He says “Digital Immigrants learn – like all immigrants, some better than others – to adapt to their environment, they always retain, to some degree, their “accent,” that is, their foot in the past.” Nothing could be truer of the majority of retailers who, somewhat clumsily, sometimes stubbornly, are still learning (disbelieving) how best new technologies can aid their businesses. But it is starting to come naturally to others, and they are changing the face of our high streets.

Retail’s digital immigration is starting to work because the paradigm of new technologies is becoming normalised. Of the Top 10 Breakthrough Technologies of 2013, recently e-published by MIT Technology Review, and presented this month in Sydney at the Amplify Festival 2013, at least four of the 10 have an application in retail. These include: Deep Learning, where artificial intelligence can recognise objects and translate speech in real time enabling seamless interaction between the purchaser and the product; temporary social media, where messages quickly self-destruct enhancing the privacy of online communication and make people feel freer to be spontaneous with their purchases; Smart Watches, that bring together multiple mobile devices into the convenience of a phone simplifying the purchasing process; and, big data from cheap phones, where collecting and analysing information from simple cell phones can provide surprising insights into how people move about and behave – and ultimately what they choose to purchase. None of these breakthrough technologies were investigated specifically for retailing, but all, as suggested, have an application that can shift us from being digital immigrants to digital natives in the retail sphere.

As time goes on we will observe, or better still use, these technologies in the pursuit of new retail models. For now, according to Lauren Indvik, SoHo New York provides a glimpse of retail’s future. In her recent article for Mashable, Indvik profiles a number of ‘on-the-ground’ examples of digitally native retailers in action and contributing to the life of the high street. Her first example, BaubleBar, a pop-up replete with digital touch screens and interactive displays, was never conceived as a bricks-and-mortar retailer. It began as a website, and the store is an experiment in translating technological engagement, editorial content and conversion-driving features to a physical retail environment. In the store, sensors and projections respond when shoppers pick up individual pieces of jewellery on display and offer ways to wear the merchandise. Then visitors are then encouraged to upload images of themselves to the website. It is intended to be temporal. Co-founder Amy Jain is quoted as saying “the (physical) store allows us to introduce the brand to new customers, who can touch and feel the product in person, then continue shopping on our site.” The success of the store and the establishment of long-term customer engagement is, however, intrinsically connected to the technological applications that power the engagement, in this case Perch Interactive for the interactive store displays and Olapic for connection to the website. Moreover, it displays a willingness to introduce new technological mechanisms into the retail space that reinforces an experience which may, indeed, complicate things from an operational point-of-view, but equally enhances the life of the street. An active and dynamic interface with high street for a “pop-up” period of time is infinitely better than a ‘for lease’ sign.

Another example provided by Indvik is Kate Spade’s new retail concept “Saturday.” Kate Spade is not a digital native but Kate Spade Saturday may well be the first example of digital immigration on the ground in SoHo. The concept is intentionally redefining what it means to window shop. In this example, shoppers can browse and purchase goods on-line or, more interestingly, interactive window shopping in SoHo. Upon purchase, couriers are dispatched and goods delivered free within the hour in Manhattan. Couriers take on the role of assistant. They wait while shoppers consider their potential purchases and only take payment (via PayPal) for items selected to keep. In this version of retailing, window shopping is literally brought to the home, workplace, restaurant or hotel. The window of the high street is dematerialised and replaced with the activity of couriers in motion. Healey Cypher, the head of retail innovation for eBay, which has partnered with Kate Spade Saturday on the initiative, reinforces this idea of urban activation activity that takes retail to the streets. Cypher says, “You’re going to stop by a (Kate Spade Saturday) window, and by the time you get to Central Park, a courier will have a picnic blanket for you.” It is retail as street theatre, powered by the behind-the-scenes technologies that enable the complex exchange to occur. And our streets are all the better for it.

It turns out, though, that having a digitally native demeanour means much more than knowing how technology works or even having access to complex information technology systems. Being digitally native means having a propensity for expediency, experiential interaction and engagement, and a desire for a little touch of street theatre. Recently in Australia the Hon. Julia Gillard sat in a chair to knit and be photographed for an Australian women’s magazine. The event caused significant controversy for the now ex-Prime Minister, but it has given life to the chair she sat upon. The chair, from Stem on Balmain’s Darling Street, sits proudly in the window of the high street awaiting its future. At the time of writing this article, it is intended that in collaboration with eBay the chair will be auctioned on-line in support of Ms Gillard’s preferred charity, Plan Australia’s “Because I’m A Girl” program. The project helps fight gender inequality and champion girls’ rights around the world, enabling and leading their families and communities out of extreme poverty. In the lead up to this event, Stem’s community is invited to provide a gold coin donation for the same cause in exchange for a photo opportunity on the chair to be uploaded to Facebook. Kate Moriaty, Stem’s founder and advocate for retail as a community experience, says: “We like creating drama and events in store and for our community.” With access to some now basic technologies of eBay, the internet, Twitter and Facebook, Stem is able to dematerialise the shop window, engage with the community, and make a contribution to the life of young women around the world. Now that is taking retail to the streets.

At Hames Sharley our Retail and Town Centre Portfolio is currently considering the impact that this changing face of retail is having on High Streets and Town Centres and how the role interface designers and industrial designers may supplement our design team in the delivery of our projects.