The retail store is the medium 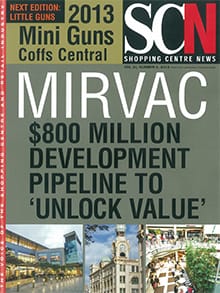 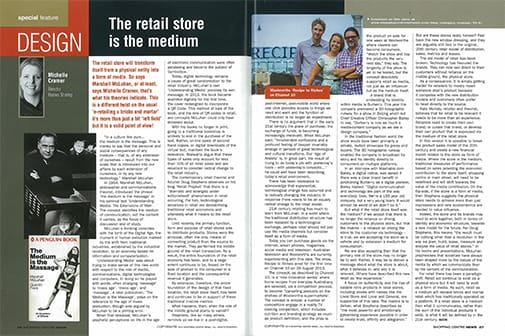 The retail store will transform itself from a physical entity into a form of media. So says Marshall McLuhan, or at least, says Michelle Cramer, that’s what his theories indicate. This is a different twist on the usual ‘e-retailing v bricks and mortar’, it’s more than just a bit ‘left field’, but it is a valid point of view!

“In a culture like ours… the medium is the message. This is merely to say that the personal and social consequences of any medium - that is, of any extension of ourselves - result from the new scale that is introduced into our affairs by each extension of ourselves, or by any new technology.” Marshall McLuhan

In 1964, Marshall McLuhan, philosopher and communications theorist, introduced the phrase ‘the medium is the message’ in his seminal text ‘Understanding Media: The Extensions of Man’. The concept identifies the medium of communication, not the content it carries, as the focus of discussion and of study.

McLuhan’s thinking coincides with the birth of the Digital Age, the moment in human evolution marked by the shift from traditional industries, established by the industrial revolution, to an economy based on information and computerisation.

‘Understanding Media’ was about trying to make sense of this new world with respect to the role of media, communications, digital technologies and computers. In doing so he played with words, often changing ‘message’ to ‘mass age’, ‘mess age’, and ‘massage’. A later publication, ‘The Medium is the Massage’, plays on the reference to the age of mass production, though was argued by McLuhan to be a printing error.

When first released, McLuhan’s prophetic perceptions on life in the age of electronic communication were often perplexing and became the subject of Symbiotics.

Today, digital technology remains a cause of great consternation to the retail industry. McLuhan’s own ‘Understanding Media’ provides its own message. In 2013, the book became available digitally for the first time, the cover redesigned to incorporate a QR Code. This method of sale of the book, and the role of QR codes in retail, are concepts McLuhan could only have dreamed about.

With his books no longer in print, going to a traditional bookshop is unlikely to end in the purchase of the text. Rather, on-line sales of second hand copies, or digital downloads of the virtual text, maintain the book’s relevance. Stalwarts argue that these types of sales only account for less than 10% of all retail sales and are reluctant to consider radical change to the retail industry.

The contemporary retail theorist and futurist Doug Stephens observes on his blog ‘Retail Prophet’ that there is a “dramatic and strangely under editorialised” phenomenon in retail occurring. For him, technological advances in retail are destabilising traditional retail economics and ultimately what it means to the retail store.

Until recently the primary function, form and purpose of retail stores was to distribute products. Stores were the principal, often the only, means of connecting product from the source to the market. They performed the middle ground of the retail transaction. As a result, the entire foundation of the retail economy has been, and to a large extent continues to be, based on the sale of product to the consumer in a fixed location and the consequential revenue it generates.

By extension, therefore, the entire foundation of the design of that fixed location, the retail store itself, has been and continues to be in support of these traditional in-store metrics.

What happens, then, when the role of the middle ground starts to vanish?

Stephens, like so many others, reminds us we live in a post-digital, post-internet, post-mobile world where one click provides access to things we need and want and the function of distribution is no longer an impediment.

There is no argument that in the early 21st century the place of purchase, the exchange of funds, is becoming increasingly irrelevant. When McLuhan said; “Innumerable confusions and a profound feeling of despair invariably emerge in periods of great technological and cultural transitions. Our ‘Age of Anxiety’ is, in great part, the result of trying to do today’s job with yesterday’s tools – with yesterday’s concepts…” he could well have been describing today’s retail environment.

There has been resistance to acknowledge that exponential, technological change has occurred and is radically changing the industry. In response there needs to be an equally radical change to the retail model.

21st century retailing has much to learn from McLuhan. In a world where the traditional distribution structure has been replaced by a technological exchange, perhaps retail should not just use the media channels but consider itself as a form of media.

Today you can purchase goods via the internet, smart phones, magazines, social media and television. Australian television and Woolworths are currently experimenting with this idea. The show, Recipe to Riches aired for the first time on Channel 10 on 28 August 2013.

The concept, as described by Channel 10, is a ‘new innovation series’ where home recipes from everyday Australians are selected, via a competition process, to become ‘top-selling products on the shelves of Woolworths supermarkets’. The concept is simple: a number of competitors engage in a reality TV cooking competition, which includes nutrition and branding strategy as much as product definition, and the prize is the product on sale for one week at Woolworths where viewers can become consumers.

“Watch the show and buy the products the very next day”, they say. The longevity of the show is yet to be tested, but the concept absolutely supports retail as media, not just as an influencer but as the medium itself.

A brand that is embedding its identity within media is Burberry. This year the company premiered a 3D holographic runway for a show in Beijing which led Chief Creative Officer Christopher Bailey to say, “Burberry is now as much a media-content company as we are a design company”.

In the traditional fashion world the show would have been primarily a private, invited showcase for press and buyers. The 3D holographic runway enabled the company to broadcast its story and its identity directly to consumers on multiple platforms.

In an interview with Mashable.com Bailey, a digital native, was asked if there was a clear brand benefit in positioning Burberry as a digital pioneer, Bailey replied: “Digital communication and technology are part of the way everybody lives. We’re a 155 year old company, but a very young team. It would almost be weird of we didn’t do it”.

We are also accepting then that the primary role of the store may no longer be to sell. Rather, it may be to deliver a message about what the store is about, what it believes in, and why it is relevant. Others have described this new retail as ‘the experience.’

A focus on authenticity and the rise of salable retro products in local stores, including stores with names like the Local Store and Local and General, are supportive of this idea. The mantra is to deliver, what Stephens describes as “the most powerful and emotionally galvanising experience possible in order to create trust, affinity and allegiance”.

But are these stores really honest? Peel back the new window dressing, and they are arguably still tied to the original, 20th century retail model of distribution, sales, metrics and leases.

The old model of retail has been broken. Technology has favoured the brands. They can now sell direct to their customers without reliance on the middle ground, the physical store.

As a consequence, it is simply getting harder for retailers to merely resell someone else’s product because it competes with the new distribution models and customers often prefer to head directly to the source.

Kate Moriaty, retailer and theorist, believes that for retail to be relevant it needs to be more than an experience. Retailers need to create their own brand, or curate that brand, or develop their own product that is espoused via the medium of the retail store.

In this version it is possible to break the product sales model of the 20th century and create a new financial model related to the store as form of media. Where the store is the medium, traditional measures of performance based on sales providing the economic contribution to the store itself, shopping centre or main street, will need to be redefined and will shift towards the value of the media contribution. On the flip-side, if the store is a form of media, then Stephens suggests the physical store needs to achieve more than just impressions and new econometrics are needed to value influence.

Indeed, the store and its brands may need to work together, both in terms of identity and economic structure, towards a new model for the future. For Doug Stephens, this means “the result must be nothing other than a revolution in the way we plan, build, lease, measure and analyse the value of retail stores”. In his books and presentations, McLuhan prophesises that societies have always been shaped more by the nature of the media by which we communicate than by the content of the communication.

For retail there has been a paradigm shift. Retail will continue to exist as a physical store but it will need to work as a form of media. As such, retail as a medium will replace bricks and mortar retail which has traditionally operated as a platform. If a retail store is a medium then what it communicates, rather than the sum of the individual products it sells, is what it will be defined by in the 21st century.