It’s still about the Experience! 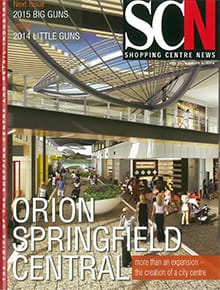 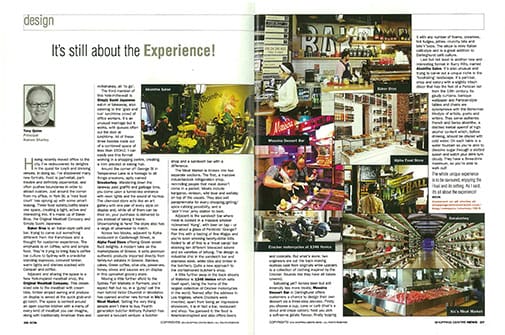 Having recently moved office to the City, I’ve rediscovered its delights in the quest for lunch and drinking venues. In doing so, I’ve discovered many new formats. Food is part-retail, part-theatre and definitely experiential, and often pushes boundaries in order to attract custom. Just around the corner from my office, in York St, a ‘mini food court’ has sprung up with some smart leasing. Three food outlets/ cafés share one space, creating a tight, active and interesting mix. It’s made up of Baker Bros, the Original Meatball Company and Simply Sushi Japanese.

Baker Bros is an Italian-style café and bar, trying to carve out something different from the franchises and a thought for customer experience. The emphasis is on coffee, wine and simple food. They’re trying to bring Italy’s coffee bar culture to Sydney with a one-dollar standing espresso, coloured timber, warm lights and shelves stacked with Campari and coffee.

Adjacent and sharing the space is a New York-inspired meatball shop, the Original Meatball Company. This closest-sized ode to the meatball with cream tiles, timber striped awning and produce on display is aimed at the quick grab-and-go lunch. The space is centred around an open counter kitchen with a menu of every kind of meatball you can imagine, along with traditionally American fries and milkshakes, all ‘to go’.

The third member of this hole-in-the-wall is Simply Sushi Japanese eat-in or take-away, also catering to the ‘grab and run’ lunchtime crowd of office workers. It’s an unusual marriage but it works, with queues often out the door at lunchtime. All of these three foodies trade out of a combined space of less than 150 square metres. I can easily see this format working in a shopping centre, creating a mini precinct or eating hub.

Around the corner off George St in Temperance lane is a homage to all things sneakers, aptly named Sneakerboy. Wandering down the laneway past graffiti and garbage bins, you come upon a tunnel-like entrance with neon lights and the sound of hip-hop. The uber-cool store acts like an art gallery with one pair of every style on display and, while all of them can be tried on, your purchase is delivered to you instead of taking it home. Showrooming is here! The store also has a range of urbanwear, to match.

Moving a little further afield to the Sydney Fish Markets in Pyrmont, you’d expect fish but no, in a ‘gutsy’ call the man behind Victor Churchill in Woollahra has opened another new format in Vic’s Meat Market. Selling the very thing people aren’t there to buy. Fourth-generation butcher Anthony Puharich has opened a two-part venture; a butcher shop and sandwich bar with a difference. The Meat Market is broken into two separate sections. The first, a massive industrial-look refrigeration shop, reminding people meat doesn’t come in a packet. Meats include kangaroo, venison, wild boar and wallaby on top of the usuals. They also sell paraphernalia for every chopping/grilling/spice rubbing possibility, and a ‘pick’n’mix’ jerky station to boot. Adjacent is the sandwich bar where meat is cooked in a massive smoker nicknamed ‘Kong’, with beer on tap - or how about a glass of Penfolds’ Grange? Pair this with a tasting of fine Wagyu and you’re soon smoking twenty-dollar bills. Added to all of this is a ‘meat candy’ bar stocking ten different bite-sized salami and six varieties of biltong. The design is industrial chic in the sandwich bar and stainless steel, white tiles and timber in the butchery. Quite a new approach to the old-fashioned butcher’s shop.

A little further away in the back streets of Waterloo is 1346 Venice which sets itself apart, being the home of the largest collection of Crocker motorcycles in the world. Named after the address in Los Angeles, where Crockers were invented, apart from being an impressive showroom, it is in fact a bar, restaurant and shop. You guessed it; the food is American-inspired and also offers beers and cocktails. But what’s more, two engineers are out the back making replicas cast from originals while upstairs is a collection of clothing inspired by the Crocker. Sounds like they have all bases covered.

Salivating yet? Across town but still inner-city lies more treats; Messina Dessert Bar in Darlinghurst offers customers a chance to design their own dessert via a three-step process. Firstly you choose a cup, cone or carb (that’s a donut and crepe option). Next you pick a soft-serve gelato flavour, finally topping it with any number of foams, creamies, hot fudges, jellies, crunchy bits and bits’n’bobs. The décor is retro Italian café-style and is a great addition to Darlinghurst café culture.

Last but not least is another new and interesting format in Surry Hills, named Absinthe Salon. It’s also unusual and trying to carve out a unique niche in the ‘foodtailing’ landscape. It’s part-bar, shop and eatery with slightly kitsch décor with a feel of a Parisian lair from the 19th century. Its gaudy curtains, baroque wallpaper and Parisian-style tables and chairs are synonymous with the Bohemian lifestyle of artists, poets and writers. They serve authentic French and Swiss absinthe, a distilled herbal aperitif of high alcohol content which, before drinking, should be diluted with cold water. On each table is a water fountain so you’re able to dissolve sugar through a slotted spoon and watch your drink turn cloudy. They have a three-drink maximum, so you’re able to walk out! The whole unique experience is to be savoured, enjoying the ritual and its setting. As I said, it’s all about the experience!