A blessing or a curse?

A quick Google search is all it takes to see just how many high-profile creatives suffer from mental illness. Celebrities such as Stephen Fry, Janet Jackson, Gillian Anderson and JK Rowling have openly spoken of their internal battles, but for many the private struggle has only come to light when it was too late: Marilyn Monroe, Kurt Cobain, Robin Williams and, most recently, Anthony Bourdain, to name only a very few.

It’s tempting to see a pattern – that highly creative people are prone to mental illness and subsequent self-harm – but from what we know of creativity it’s also difficult to square that circle.

The act of creation – by definition the making of something new or valuable – can have a stabilising and beneficial effect on your mental health. As we create things, whether we’re talking art, writing, or a plan for a new building, our emotions undergo a process called sublimation, transforming and releasing the sometimes dark contents of our minds in beneficial ways – think of it as a kind of mental pressure valve. Flip that on its head, however, and you can argue that if creativity is a socially acceptable way of subduing our inner demons, perhaps the most creative artists have the baddest demons to tame.

The problem with trying to find any kind of link between creativity and divergent mental health, however, is that the evidence to back it up tends to be anecdotal. There just isn’t the rigorously assembled scientific data to prove or disprove the theory, and mental-health professionals tend to be divided as to which way to jump.

One study in 2015, for example, claimed to prove a link between the genes found in creative people and the development of mental-health disorders – that if you are creative, you have a 25 per cent higher risk of schizophrenia and bipolar disorder. Analysing results from 86,000 Icelanders and comparing them with a further 35,000 respondents from elsewhere in Europe, Kari Stefansson of Reykjavik-based genetics company deCODE posited that for a creative one per cent of the population, problems such as mental illness were far more likely.

“Often, when people are creating something new, they end up straddling between sanity and insanity,” said Stefansson in an interview with The Guardian at the time. “To be creative, you have to think differently. And when we are different, we have a tendency to be labelled strange, crazy and even insane.”

At the time, however, Stefansson’s connection was – by his own admission – only a weak one. For many health professionals, the counter-argument is far stronger: that while we hear much about celebrity creatives who suffer from mental disorders, they are by no means the norm. Harvard University psychology professor Albert Rothberg interviewed 45 Nobel laureates for his book Flight from Wonder: An Investigation of Scientific Creativity – not one of them showed any sign of mental illness worth mentioning.

Speaking to Business Insider earlier this year, psychologist Perpetua Neo wondered if the issue wasn’t more with creatives buying into the idea of the starving artist, sacrificing their physical and mental wellbeing as a trade-off for their “process”.

“As a psychologist, I would ask if perhaps they need to believe, to create their identity, to be an artist with a tortured soul,” Neo said. “If you’re always going to be that way and take it as your identity, you’re going to make choices that lead you down that road. There’s this idea, this perception, that I don’t know how to manage money, I’m bad at this, I don’t know how to be commercial. And of course, if you think that, you’re going to stay there that way.”

This could, potentially, give rise to new problems if the creative process leads to some form of success – the sublimation mentioned earlier. If things start to improve for the artist through the act of creation, what then?

“If they come up against the prospect of getting better, they may start to wonder who they are without their problems,” Neo remarked. “They might think, ‘Who am I when the pain is gone?’ or ‘If I’m not a tortured soul, will I actually be creative anymore?’”

More insidious still – and suffered by a significant number of successful creatives – is Imposter Syndrome. Put simply, it’s the feeling that any success the creative has achieved has only happened through blind luck rather than talent, and that at any moment, the world will realise they are a fraud; it’s an extra degree of pressure many artists are compelled to deal with even when things are going well for them.

“It’s got to do with this disconnect of how they see themselves,” said Neo. “They often feel like they don’t deserve something, or it’s because the gulf between the expectations of where they should be, and where they actually are, is very big.”

The latest study into a link between mental illness and creativity was published in the British Journal of Psychiatry, and suggests that not only are there links between the creative mind and schizophrenia, bipolar disorder and unipolar depression, but that the more creative you are, the greater the risk ramps up.

“We showed that the more you zoom in on people with creativity, the greater the association with mental disorders and so I would expect that those people with the greatest levels of artistic creativity would have the highest risk,” said lead researcher James MacCabe of Kings College London.

“With creativity you often make creative or intuitive leaps between ideas. And this often happens in mental disorders as well – when you’re forming a delusion, for example by adding two and two and making five, and coming up with some creative theory.”

MacCabe himself cautions that this is only a theory since his study did not specifically examine the link between super-artistic people and mental illness, but nonetheless the work has received support from more than one quarter.

“As someone who specialises in psychosis, I have long had the impression I see more ‘artists’ than other students or graduates,” says Professor Stephen Lawrie, of the University of Edinburgh. “This is a very interesting study that takes a particularly rigorous approach to the issue. And it accords with my clinical experience.”

Meanwhile, Marjorie Wallace, the chief executive of the mental health charity SANE, said, “This is the first major study on such a large scale to reinforce the long-held belief that there is an important connection between artistic creativity and susceptibility to mental illnesses, in particular bipolar disorder.”

Maybe this is a breakthrough, maybe not, because without definitive proof it’s possible to argue both genetic and behavioural connections between mental illness and the creative mind. Which is more likely? Could it be both, or could we be trying to force a correlation where none exists? Of course, doctors will continue to search for the answer, but in the meantime, as people who work in creative industries and media, it falls to us to monitor and care for our friends, our co-workers and – importantly – ourselves. Because if there is a lesson to be learned from the creatives we have lost, it’s that the private battles are the most dangerous ones. And as with any fight, you’re more likely to win when someone has your back. 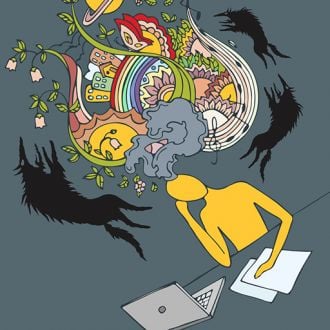