The 2018 Commonwealth Games village and the evolution of TODs

Urban planners and developers around the world are keeping a close eye on the 2018 Commonwealth Games village – currently under construction on the Gold Coast – and not because of the sport.

In the past, planners and developers have seen TODs as a way of revitalising tired suburbs and encouraging public transport use, with a focus on creating high-density residential and commercial areas close to mass transit within cities.

In the case of the 2018 Commonwealth Games village, the key transit mode is light rail, rather than a train line, which leads to some key differences in TOD outcomes. There are also other elements of the Games village that explore new dimensions of TODs.

“Previously TODs were more about revitalisation and wanting to promote more public transport as opposed to the private vehicle. Now TODs are more about connecting cities in a linear way,” she said.

“The trend is to think more spatially and to connect the villages within the city, with multiple destinations across the transport nodes that work together.”

This approach is particularly apt for the Gold Coast. In the 1920s, the Coast was a collection of holiday shacks that formed little communities of holidaymakers escaping from Brisbane. Over the decades, the gaps between the villages have filled with houses linked by roads, but there are still distinct hubs along some 40 kilometres of coast.

The G-Link opened mid last year and connects Griffith University and the Gold Coast University Hospital at the northern end, with Broadbeach North and South at the southern end. Its 16 stops fittingly reflect the original village hubs.

What’s exciting about using light rail instead of heavy rail as the transit mode is that the stops are right in the main streets of the destinations. It’s ‘ride and walk’ at its best.

Until ‘the G’, the uni and hospital were ‘out in the sticks’, accessible only by car. The Games village and facilities will be built around these two key community facilities and returned to the community once the event is over, adding houses, apartments, offices and shops to the mix. The challenge now is for the urban planners and architects to deliver people-focused design.

“It’s a matter of building on the existing use and integrating town centre uses. The university is there now, the 2018 Commonwealth Games village will go there. So how do designers future-proof that development?”

One of the key changes to TODs design in recent years has been a greater focus on community. While there are design principles applied, the approach is inherently less formulaic.

“It is no longer a matter of ‘build-it-and-they-will-come’,” Melissa said. “And it is less about density and more about community use. A TOD is usually on a route to somewhere but in the Gold Coast example, they are creating a destination – a place to work, live and play. It is a catalyst for a TOD with a different focus, that being education in this instance.”

Whether or not the next evolution of the TOD wins public support depends on how designers treat the public realm.

“It’s about creating environments that feel safe, with lighting and increased pavement width promoting pedestrian focus. If it is inviting, people will use it. The scale of development is important, the landscaping, the signage to help people find their way, navigate and orientate.”

Public spaces also need to provide shelter, privacy and open areas and the way to achieve this is through landscape and scaled built form.

“It needs to be focused on people and how they use the space so people can access it and want to use it,” Melissa said.

While the Gold Coast is leading the way, with the Games giving the TOD extra funds and global interest, the model is already spawning projects with similar opportunities and constraints.

One such project is the proposed development of Petrie Mill, an underdeveloped green-field site between Brisbane and the Sunshine Coast to the north.

“The proposed development has identified a need within the community and is considering establishing an education and research centre of excellence, with a University proposed for the site,” Melissa said.

“With an existing major regional shopping precinct nearby and industrial and residential pockets, the development would connect to these zones via a recently constructed train line extension.

“It will be another learning innovation Hub, and a further evolution of the TOD.” 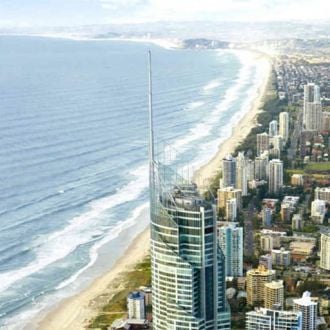