A cheeky ghost, backstage superstitions and sensitive colour schemes are just some of the intricacies we’ve faced while working on Subiaco’s iconic 1930s picture house, The Regal Theatre.

You breathe the sense of history as soon as you walk through the doors: it permeates everything at The Regal, from the ceiling cornices to the worn carpets, making it impossible not to be transformed back to the sights and smells of its between-the-wars era.

For these reasons, it has been imperative for our team – the architects behind The Regal Theatre’s latest refurbishment – to absorb ourselves in its rich history.

Located on the corner of Hay Street and Rokeby Road, The Regal Theatre is a much loved Subiaco icon.

Built on the site of an open-air garden cinema, once called The Coliseum Picture Garden, the theatre as it stands today was built in 1937 based on a sketch design from the office of William T Leighton, by architect William G Bennett.

It was a grand design, commissioned by noted WA playwright Dorothy Hewett’s father, A.J. Hewett and her maternal grandfather, Ted Coade, and is still admired as one of the most important examples of art deco architecture in Western Australia.

The theatre was named The Regal after King George VI (who was crowned the year of its construction) and was officially opened on 27 April 1938 with a screening of Shall We Dance, featuring Fred Astaire and Ginger Rogers.

A young “picture showman” Clarence (Paddy) Baker, bought the Regal from the Hewett family in 1946 after many years in the film industry in WA.

Paddy’s respect for film, and his enterprising spirit led the theatre into a new era of niche screenings, including surf and Kung Fu films, but The Regal was most popular amongst young mums for its Saturday afternoon “Children’s Film Clubs”.

According to historians, mothers could leave their babies in allocated “pram parks” in the foyer and would be alerted on-screen if their baby started crying. There was even a sound-proof “crying room” at the back of the theatre for Mums who were called out to attend their babies…but didn’t want to miss any of the action.

In 1976 Paddy leased The Regal to an accountant Stan Bird and his show-biz partner John Thornton who together established it as a performing arts venue.

With Paddy’s permission, they made significant changes to the cinema in order to transform it into a functional theatre space. A fly tower, backstage dressing rooms and four retail shops were later added to the building along Rokeby Road.

It has remained a performing arts theatre to this day and is now one of Perth’s major arts venues.

Following Paddy’s death in 1986, the theatre was left in the good hands of the Regal Theatre Foundation (originally the Baker Theatre Trust), after being willed to the Western Australian community by Paddy on the proviso that it would remain as a venue dedicated to the arts.

It was January 2013 when Hames Sharley was commissioned to be the lead consultant on the project and in December 2014, the staged refurbishments began. The first two completed stages have been funded by the Regal Theatre Foundation through a series of successful grants – including a $1.5 Million grant from Lottery West and half a million dollars from the Subiaco Council.

As a State Heritage, National Trust and Australian Heritage Commission listed building, the refurbishment we have just completed is the first stage of a phased refurbishment and while it was also the least invasive stage, everyone working on the project has been supremely aware of maintaining the unique art deco character of the theatre.

After carrying out forward works in 2014 and 2015, including structural work to the balcony, repairing the fire egress stairs, fixing cracks in the walls and leaks in the roof, the fun part really started in November 2015 – refurbishing the auditorium.

One of the challenges we faced in working on this project was that it is still a functioning theatre, so we had to find a way of working around commitments made by the venue management company, often months and years in advance.

As a result, the theatre was shut down for almost three months over the 2015-16 Christmas period, so we could have unimpeded access to the auditorium.

But just because we were able to get rid of the “resident thespians” for a few months, didn’t mean we weren’t influenced by their superstitions.

One thing I love about architecture is that a building has to represent the activities and the people it houses, including all of the quirks and intrigues that go with it.

Actors, for instance, are meant to be superstitious about performing in theatres featuring the colour green – just like the whisper of Macbeth backstage, green will strike fear in to the heart of any actor – so we had to be careful not to include green in any new furnishings or colour schemes.

When selecting the internal colour scheme we had to keep a number of factors in mind, with the biggest influence on the outcome being the limited options we had, given the building’s heritage attributes.

In conjunction with feedback from the Heritage Council, we settled on a modern interpretation of the existing colour scheme and all of the research we had undertaken on the original colours, including various paint scraping investigations.

In addition to the paint job, we brought in brand new seating from an American company, which helped us to create custom seats that would suit the art deco style of the original fittings.

We polished all of the floors, replaced the carpets running down each of the aisles, refurbished the original lighting by adding LEDs to existing heritage fittings, and updated part of the air-conditioning distribution so that it is more efficient and effective.

We’re now working with Paddy’s Regal Theatre Foundation in an advisory capacity to help them apply for further funding to ensure the theatre can be progressively improved through further stages of refurbishment. It’s become a real partnership between Hames Sharley, the Foundation, the City of Subiaco and the Subiaco community, and we’re all really proud of what we’re doing.

Paddy lived and died at The Regal, so it was more than just a business, it was his life, his home.

The theatre bar, now called “Paddy’s Bar” used to be his flat and the venue managers love telling stories about his ghost playing cheeky tricks on them – from creaking doors to mysteriously opened safes.

I’d like to think Paddy is happy with what we’ve done so far, and our plans for the future of his famous theatre – perhaps that’s why he keeps opening the safe? 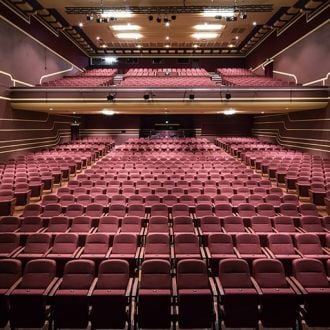