A (very brief) history of cities

Cities are centres of population, commerce and culture, yet it is not widely known how this way of life came about. Looking to the past, however, enables us not only to decipher how cities came to be but also how they are defined and what they mean for the future of our societies.

The Oldest Cities in the World

Between the Mediterranean Sea and the Persian Gulf sits the birthplace of cities – Mesopotamia. Spanning present-day Iraq, Iran, Syria and Turkey, Mesopotamia’s origins were during the Neolithic Revolution, when it is believed that the rich soil along the Tigris-Euphrates river system assisted in the transition from hunter-gatherer communities to an agricultural society. This, in turn, promoted settlement.

The first Mesopotamian city – described in The Epic of Gilgamesh – was Eridu, built for the king of water, Enki. It can perhaps be considered as the first Holy City, centred on a temple for the king, known as the House of the Aquifer. Other well-known cities from the region include Babylon, Ur and Uruk, and these too were Holy Cities.

There is much debate about the identity of the oldest city in the world, however, partly because the carbon-dating of the cities is only approximate, but also because there’s some disagreement about what actually counts as a city. While Mesopotamia certainly had some of the oldest examples, they are pre-dated by a number of other settlements that could fit the definition:

However, while these cities are older than those in Mesopotamia, their peak in prosperity occurred closer to third millennium BC. All are still standing today, having previously flourished as centres of trade due to their agricultural economy.

The Definition of a City

While great discussion surrounds what defines a city, here is a list of characteristics that are often present in one (although a settlement does not need to possess all these qualities to be considered a ‘city’).

The notoriety of today’s cities is often defined by population. In the fifth millennium BC, the first cities were also defined by a high population as a result of the beginning of settlement.

Population density is calculated by dividing the population by the area, a measure that usually results in a large figure in cities. Architecturally, high density living is characterised by a large number of high-rise buildings that address the need for offices, housing, retail and other accommodations in such a limited space.

If the origin of cities can be considered in terms of agriculture and trade, it is easy to see why they are often economic hubs. With a higher population comes a larger number of job opportunities, resulting in a centre for business.

Cities often serve as administrative centres for their larger surrounding areas, setting laws and regulations, and usually levying some form of taxation.

Typically centres of education and the arts, cities support universities, museums and religious buildings such as temples or cathedrals. Other forms of cultural expression and heritage can be found within a city’s architectural style.

With a large population comes the need for good health. All cities, therefore, include facilities such as running water, and sewage and waste disposal.

Cities often act as central transport hubs, and depending on their location can feature railway networks, maritime ports and airports. Effective transport systems have been a feature since the world’s first cities, which relied on trade routes to support their economy.

While safety is not a defining factor of a city per se, being able to feel safe where you live is an important consideration for citizens. The first cities were surrounded by large walls as a means of defence, for example. Further to this is the idea of safety in numbers, and the feelings of security that come from being part of a large community.

By 2030, 75 percent of the population is expected to live in cities, while the number of megacities is also expected to increase (currently, there are 37 megacities, that’s to say those exceeding 10 million people). For the future, it seems that smart cities will be the way forward.

A smart city is one that self-measures data, which in turn is analysed to create efficiencies. The aim of smart cities is to reduce cost and resource consumption, and also combat some of the issues that arise from city living, such as the increase of slums, crime, homelessness, traffic congestion, pollution, and other environmental considerations.

With cities continuing to grow as epicentres for activity, it becomes harder for society to move away from them, and as this growth presents further challenges, it makes sense that we look to smart technology to solve them. 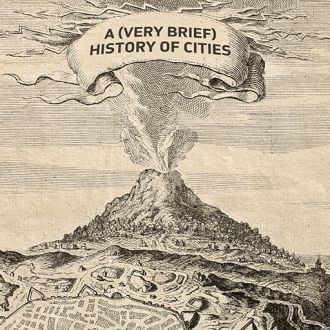