Today, people are increasingly communicating online rather than face-to-face, replacing social spaces with social networks. So, what does this mean for physical communities? Are they diminishing in value?

Here, we investigate how the digital era has influenced a new type of placemaking.

In his book titled Life Between Buildings, Danish architect and urban designer Jan Gehl identified three types of outdoor activities. These include:
Traditionally, most of these activities such as meeting friends and going to the store were all carried out in public spaces. Now, because of the internet, more of the necessary outdoor activities are turning into optional ones.

With this in mind, urban designers are looking to harness the digital to create more active public spaces rather than empty ones – a phenomenon known as digital placemaking.

Placemaking can be defined as a multi-faceted approach to the planning, design and management of a public space to best serve the community’s interests. This can include objectives such as encouraging people’s health, happiness and well-being through the power of the arts, culture and creativity. Digital placemaking, therefore, can be considered the integration of the internet, and other digital mediums into this practice. It is one of the key tenets of the smart cities movement occurring across the globe.

Co-creation is important as it encourages personal investment from stakeholders, yielding greater engagement. The community will usually include key stakeholders such as residents, businesses as well as cultural, religious or educational organisations. Feedback from stakeholders can be obtained using workshops, or often more cost-effectively with digital platforms such as surveys and social media. Hames Sharley has adopted this approach for the Shire of Serpentine Jarrahdale in Western Australia, utilising online surveys to help prepare development strategies for four town centres in the area.

You can read more about the changing landscape of stakeholder engagement here.

According to the UN Human Rights Council, internet access can now be considered a basic human right. It is also recognised as the ‘fifth utility’ alongside water, electricity, transport and gas. Introducing Wi-Fi access to a public space will not itself re-vitalise a place but can enhance placemaking when integrated with place activation strategies.

To avoid public privatisation – where one uses a public space but keeps to themselves – designers must strategically employ components of interactivity by using Wi-Fi. For example, creating buttons, sensors or activities that encourage socialisation and participation.

An interesting concept to consider is the phenomenon of the Pokémon Go App. In its peak popularity, many people met together in public spaces to participate in ‘raids’, a strategic move within the game that requires players to battle in the same radius of each other in the location of a Pokémon Go ‘gym’, or battleground. These battlegrounds were often situated in parks and other public places, creating a meeting ground for players of the game.

Another form of digital placemaking is the use of art installations. Examples include light shows, non-commercial urban screens, interactive architecture, augmented reality and location-based content.

The biggest public space that uses commercial urban screens for digital placemaking is New York’s Times Square. A little closer to home, the Vivid Sydney Festival illustrates the use of light shows and interactive architecture to add to the ‘soul’ of the city.

Many apps and digital technologies have been developed to encourage wayfinding, allowing users to better understand their way around the environment. Examples include maps that can be displayed on a smartphone showing historical or cultural information or information about surrounding utilities. These are commonly used by tourists or people who are new to a space as a means to gain knowledge and feel more comfortable.

The use of the digital must strategically align with the philosophy of placemaking and should not be utilised out of obligation or in isolation. Its purpose must be clear, and be used to enhance the goals of the community. Most importantly, it should add to the site rather than distract users from it.

More and more the use of digital placemaking will become the norm in community design.

Digital connectivity is essential infrastructure for the future. Digital placemaking will transform the way we use our cities in the same way the smartphone has transformed the way we communicate with each other.

For more information about how the internet can affect the shaping of cities, check out our story The Shape of Things to Come. 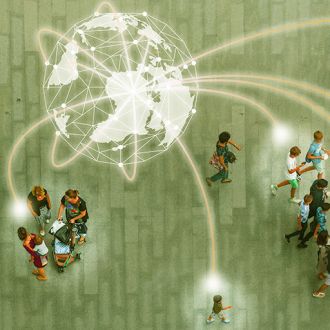