The shape of Things to come

Disaster! You’ve slept through your alarm! Fortunately, your smartphone notifies your smartwatch of the problem and tells it to wake you up. The phone has also pinged your coffee machine to prepare a coffee to go and contacted UberEats to schedule breakfast to be delivered to work – you’ve no time to eat before you leave. Your wardrobe, meanwhile, has already picked an outfit for you, having recorded all items of clothing you’ve worn in the last week to ensure you don’t wear the same thing twice.

Once you arrive at work, you pick up a notepad and pen from the stationery cupboard, where you notice the stock is running a little low. Normally it’s your job to ensure supplies are replenished but this time, you don’t need to worry – you’ve just implemented a system where the cupboard records its own stock levels, so an automatic message will already have been sent to the supplier.

It won’t be too long before this kind of scenario becomes the norm – technology is advancing so quickly that soon whole armies of devices will be deployed to mitigate against more than just sleep-in catastrophes. And the principle behind all of it is the Internet of Things

While the internet is generally seen in terms of connecting people to people, or people to things, the Internet of Things imagines the web’s ability to connect devices – one thing to another. Its aim is to create efficiencies by automation, measuring data based on a thing’s usage, consumer behaviour and performance, and then using that data in the decision-making process.

The Internet of Things is already being implemented around the world in the shape of smart cities, smart homes, wearable devices (such as Fitbits and smart watches) and even cars, all collecting data autonomously and streaming it to other devices.

As you can imagine, the ability for things to converse with other things independently will revolutionise industries across the board, especially in terms of how those things are designed. The architecture industry will be no exception – here are four possible ways the Internet of Things will revolutionise the business.

While the Internet of Things will surely create a new world of optimisation impossible to maintain by humans alone, don’t worry – it doesn’t look like you’ll be out of a job anytime soon. Certainly, inanimate things and devices can have the ability to measure data themselves, but it is important to note that they will still need to be fed responses to act upon – and that’s where human analysis comes in. Hand in hand with this vital human input, the Internet of Things could well provide a world of greater efficiencies, and better-informed design decisions; a world that’s just around the corner.

For more examples of how the Internet of Things is revolutionising industries, click here. 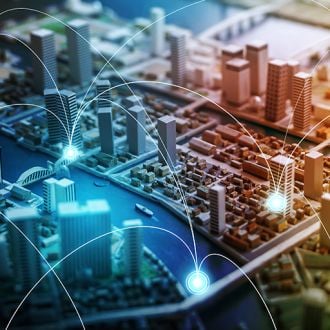