Adelaide is on the move. A vibrancy is permeating the city of 1.2 million, the streets are full, house prices are rising gently but steadily, and there is a buzz in the air. The city is waking up to the possibilities of urban excitement.

For property investors, Adelaide is a rising market, says property observer, Terry Ryder. “The South Australian capital has more forward momentum than most of the capital cities. Given that this has not yet translated into major price growth, it represents an opportunity for investors,” Ryder wrote in Property Observer, in July this year.

The emerging energy of the city has a very definite source; multiple sources in fact, according to John Byleveld, Adelaide resident, and Hames Sharley architect. “There’s a lot happening,” Byleveld says. “We are coming off the back of the biggest ever capital spend on public infrastructure and facilities.”

These State Government and local council development projects include:

Not just the money

It’s not just the big bucks that are injecting life into the city streets. The State Government recently introduced the small bar legislation to make it a lot easier to get small bars and venues up and running. Byleveld says: “We are seeing our little laneways completely reactivated by these small bars, and they are fed by patrons coming straight out of the Adelaide Oval, across the footbridge. The city is really attractive,” he says.

Residents are responding to the opportunity to hang out, walk, cycle, visit, shop and mingle in the city. And they are choosing to live closer to the CBD.

The most sought after residential projects are within the postcode “5000-plus zone” Byleveld says, meaning within 10 kilometres of the CBD.

Those most in demand are five to six stories, filled with natural light, and endowed with a thorough mix of activity – both shops and services – on the ground floor.

Extensive landscaping and a range of floor plans have Adelaide buyers signing contracts off the plan.

“Those apartments that are successful get the right scale and ‘grain’ for the Adelaide community,” Byleveld says.

The government is stepping in to subsidise a proportion of some new developments as affordable housing, in addition to a mix of mid-priced and premium apartments.

“Through the projects we do, we are reshaping expectations and products, and people are responding.”

The role of Design Review

The Office of Design and Architecture, South Australia (ODASA), has extended the reach of its Design Review process to encompass $10 million-plus developments in the 5000-plus zone; it was formerly applied only to $10 million-plus buildings in the CBD when it was established just two years ago.

The residential regeneration includes major renewal precincts, such as:

Not all of Adelaide is enjoying such a renaissance.

Byleveld describes the City of Port Adelaide, far-flung by Adelaide’s standard from the city centre, as “our beautiful port city”.

It is suffering, however, because of its distance from the burgeoning city. Nearby West Lakes was the former home of the AFL football games and events that the Adelaide Oval now hosts. Now, a decision to close down a precinct of four courts, including the Magistrate’s Courts, has local retailers in an uproar.

It’s the area of Adelaide that needs attention, Byleveld says.

In addition, some of the key ideas proposed for Victoria Square have been put on hold, and, despite a great master plan, and a new amphitheatre performance space, it remains a problematic space to activate. “Victoria Square is our main square, but it is huge, 6 hectares and twice the size of the Melbourne Cricket Ground,” says Byleveld. “At the moment it’s more of a thorn in the city’s side than an opportunity, acting like a big traffic island. With the cars hurrying around it, it’s hard to get into.”

The next big thing

The area to the West of the city, close to the renowned Adelaide Central Markets, has long been a gathering point for artists, who can still find relatively cheap warehouse spaces to rent.

“The central markets are the icon of Adelaide, featuring the best of South Australian food and produce,” Byleveld says.

Developments are slowly creeping into the area, which currently has a lot of single-story row housing, pocked by vacant lots and used car lots. There is a lot of interest from Chinese developers provided they can make the return on investment stack up. There is a 10-story height limit in the area, but this height has not in the past been very popular with Adelaide buyers.

The government hopes that the upgrade of Victoria Square will help to foster more interest in the area as a place to live. Although the Square’s upgrade has not been completed, the hope is that enough has been done to build interest and activity in the square and resurgence in living nearby it.

It’s not a housing price spike

Fortunately, house prices are not rising too quickly, Byleveld says. The death of Australia’s car industry has hit Adelaide hard. It was home to Mitsubishi, now closed, and Holden has announced it will close in 2017. New economic activities need to be found.

“We don’t want a spike,” says Byleveld. “We can’t sustain one, and the city is in great shape at the moment.”

About John Byleveld: An architect with Hames Sharley, John Byleveld is also the host of a regular radio program about all things architecture, called The Plan on Radio Adelaide, 101.5fm. 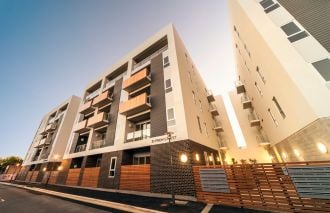